Loading
The 2A Boys race was a brilliant performance by Pace Academy.

2A Boys Meet Recap - Blaha and Pace not to be denied. 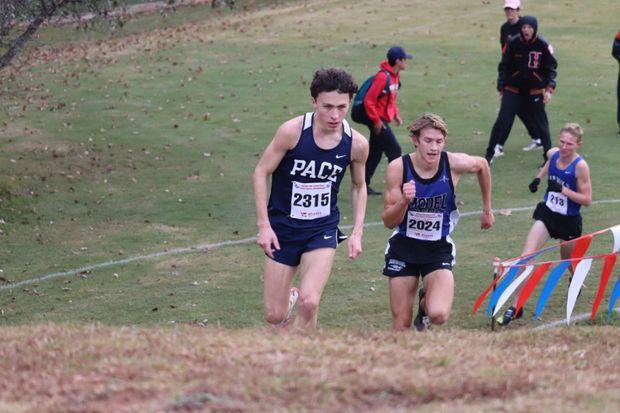 Blaha being closely followed by Schabort and Ledford

Edward Blaha of Pace Academy repeats as State Champion. Not too many people are going to be surprised by that statement. But you've got to tip your hat to a kid who has pressure to perform and comes through with the win. Blaha had some company early as Simon Schabort of Model and Buck Ledford of Banks County were right up with him heading towards the mile breathing down his neck. The Pace senior certainly felt the pressure early and still had some company as he hit the halfway with Schabort still on his shoulder. 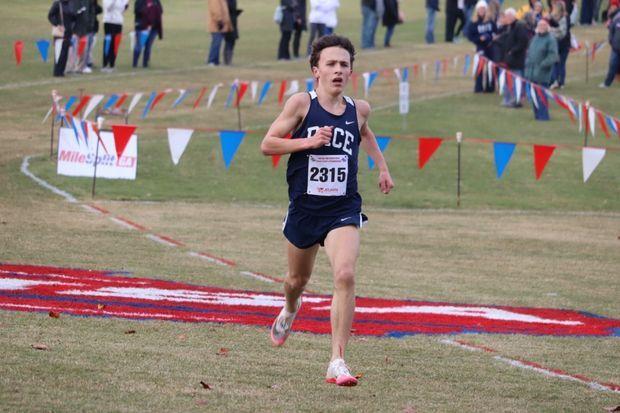 Blaha with the win

But the hills of Carrollton eventually take their toll on everybody and eventually it was just Blaha. He came roaring down the final stretch to clock a 16:09, the 7th fastest of the meet to repeat as Champion. Behind him Schabort stayed closest the longest, but it was the senior Ledford who put together the next best race to take home runner up in a very strong field individually. His 16:24 would end up being the 13th fastest time of the meet and it's no surprise as he has delivered all year.

Interview with Buck Ledford after a phenomenal race. Churchwell and the chase pack early

Bleckley County junior Luke Churchwell opted to hang back instead of attacking the early pace with Blaha as he was sitting in a pack with Pace's 2nd man Grant Thompson and top Lovett runner Hunt Shurling battling it out. They would eventually be joined by George Blaha, who started out much slower and caught them around the two mile. In the 3rd mile the pack began attacking and going after Schabort who had fallen off the lead pack. Churchwell and George Blaha had an epic finish battle

Eventually the pack would catch him and duke it out for the bronze medal. It was George Blaha and Churchwell who would pull away and fight all the way to the line with a tight finish that Churchwell took by 0.59 seconds. Schurling wound up 5th and Thompson was 6th. Schabort held on for 7th and behind him were two more Pace runners who started out conservative and found themselves in the top ten in the end as Robert Mallis and Matthew Wells sealed the deal for Pace. The battle for 10th was intense

Rounding out the top ten was Kson Jones of Bleckley who held off Zach Mickler for the final 10th place medal on the day.

Interview with Pace boys after their win.
The team race went basically exactly according to plan. Although I'm not sure everybody expected Pace's boys to be quite so dominant. Overall as a team they sat back a little bit and let the race sort itself out the first mile. Lovett was definitely still close to them by the band field. But they just kept moving up through the race and pulled away consistently until eventually they had 5 runners in before anybody else had two. They put 5 in the top 9 places to score just 28 points and wind up with the 2nd fastest team average of the meet.
2A Boys team awards Ceremony

Lovett gave it what they had with nothing to lose, but just couldn't hold serve with their region rivals. They had to settle for 2nd place on the day with 76 points. Bennett Denker and Parker Coy were 13th and 14th overall which was just too much for anybody else to match. Bleckley County continued to impress at state as they took 3rd place with 161 points holding off a charging Jeff Davis squad that would end up fourth.Behind the top ten performances of Churchwell and Jones Bleckley had freshman Briggs Dominy run 17:57 for 18th overall. Jeff Davis relied on the pack after not having any front runners. Their 1-5 split was only 35 seconds led by Skyler Cravey in 18:28, which is crazy impressive for Carrollton.

The 2A girls race from Carrollton Hood early in the race

Pace Sophomore Caroline Hood came into this meet as the heavy favorite and she ran like it from the gun. She took it out quick and nobody even bothered to challenge her. Hood has had a monster year this year and is definitely one of the most improved elite runners in the state, so it was nice to see her finish things off the way she started them. She took the win in a very strong 19:09. Kudos to her on a fantastic season and good luck in the post season. Green and Arenth went back and forth

Behind Hood there was a little bit more action. Hood's teammate Laura Arenth and Lovett superstar Freshman Mary Parrish Green ran side by side the entire way behind Hood. They opened up a gap that was just big enough that nobody else could quite squeeze in there. At various times Arenth looked better and at others it looked like the freshman would steal the show. But in the end it was the senior with the experience of running this course for the fourth time in her career that had the strength to make the move in the 3rd mile that was necessary to break the freshman. Arenth Clocked a 19:38 and Green held on for a 19:48 in 3rd. After that we saw Bleckley junior Tristen Crosby and Pace Senior Jordan White set the pace for the battle for 4th place. But lurking behind them was Coosa sophomore Sophia Cook. Crosby made the first move after the mile and looked to be breaking away around separation slope, but Cook was hunting her down and so was Pace senior Kate Jonas who sat back the first mile and was now moving up to race this pack. By the time they passed the two mile Cook had taken over and was charging hard pulling away from the pack with Jonas and Crosby trying to hang on. In the end it was Cook in 4th with a sub 20 time of 19:59, very impressive for Carrollton. Jonas was 5th in 20:05 and Crosby held off White to take 6th in 20:20 while White was 20:35. Abby Newton and Ellie Wildman of Lovett worked together and hung back early, well outside the top 10 at the mile. As the race progressed they slowly worked their way up and by the two mile were in 8th and 9th after passing Oglethorpe County teammates Lizzie Wadsworth and Sydnie Henderson. Newton would end up taking 8th in 20:39 to Wildman's 20:49 in 9th while Wadsworth was able to hold off a big kick finish from Henderson to take the final podium spot.

Interview with Hood after her win

In the team battle it was all Pace all day. The Lady Knights put 4 in the top 7 and 5th runner Olivia Resnick was 12th overall to secure the win with 27 points. Lovett put together a very solid race to take runner with 61 points placing 3 girls in the top 10 and all seven in the top 30. With only one senior in the group they should be hungry for more next year. Things went chalk at 1-2-3 as Bleckley County took 3rd place overall with 107 points with strong showings from their 2-5 pack which was separated by only 53 seconds led by Piper Simpson and Johna Bowen. Oglethorpe County used their low 1-2 punch  of Wadsworth and Henderson to snag the final podium spot. Behind those two it was Freshman Harper Palmer that helped them match everybody else at 3-4-5 and take him the final trophy.