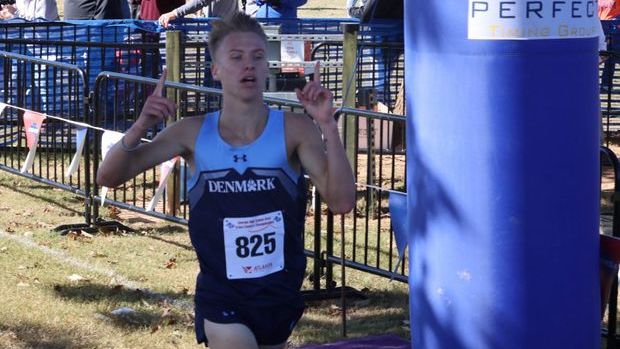 Ethan Ashley was amazing, just like he's been all season. Photo by Marc Logan McCartney had the early lead. Photo by Marc Logan

We were in for a huge surprise as when the "masses" first saw the racers, we were treated to Steven McCartney and Miles Ferguson of Archer having a commanding lead. Both athletes set an incredibly fast pace, and it came across as high risk/high reward. Following a good bit behind them was a pack of guys which included Ashley, Dru Moore (Etowah), Ethan Nordman (Mill Creek), James May and Jared Fortenberry (Marietta), Trent Bell (West Forsyth), Nate Verska (South Forsyth), Caden Hall (Parkview), and a host of others. Heading up the U-turn finish hill the first time around, McCartney and Ferguson still had the lead, but it was much less than before. A chase pack had emerged, and all had their eyes set on the Archer duo. This was my first sighting of Dillon Watson of Woodstock and Houston Hamby of East Coweta. It was now apparent that there were 12 guys fighting for 10 spots. Then, upon the athletes emerging from the "wall" the second time around (near the bus lanes around 1000m to go), it had really separated. We now had a new leader in eventual race winner Ashley who, at this point, was still followed pretty closely by May, but Ashley simply was the class of the field and appeared to be putting everyone else away. A surprise appearance by Hall was next and held a narrow lead for 3rd place over Nordman and Verska. The top 10 picture was starting to clear up a bit as the next mini pack of Bell, Fortenberry, an exhausted looking Ferguson, Watson, McCartney, and Hamby. We were now down to 11 guys for 10 places. Verska Holds off Bell for 5th. Photo by Brian Henley

From a team standpoint, it appeared to be Marietta, Harrison, and a surprise Roswell off to the early lead with Mill Creek running into some trouble with runner Jake Peters losing a shoe and a relatively sluggish looking start. They mounted a huge comeback in the second half of the race though as Harrison and Roswell began to fade. As always, it comes down to 5th man, and as video shows, Peters of Mill Creek outkicked a handful of kids on the final hill to secure the victory for MC Baby. Marietta took second only 2 points back. Denmark was another team that moved up well and finished a solid 3rd followed by West Forsyth who snagged the final podium spot.

McGarity and Teammates after the race

We all knew it was a three team race entering State with Marietta, Hillgrove, and Harrison all vying for the top spot. The other team race going on was the chase for the final podium spot, and man was it tight. Only 27 points (!!!) separated 4th place from 9th place when the results were made public which, admittedly without doing much research, has got to be the closest 6 team spread in recent memory. It could've gone any number of ways, and it's very, very safe to say that all of those teams are worthy of the podium and could have made the podium if the race was run a bunch of times. It was that close.

Things were interesting individually, too. Emma Geaney of Parkview and Kyra Andrews of Norcross opened up with the early lead heading toward "the wall" but were being closely followed by quickly emerging Samantha McGarity of Harrison who appeared to just be biding her time with a more patient race approach. Off the back of McGarity was a massive clump of ladies which included both Carmel and Isabel Yonas (South Forsyth), Claire Shelton  (Dunwoody), Kristal McQueen (Marietta), Ashley Thompson (Gainesville), Haley Primm (Parkview), Farrah Frith (Milton), and a host of others. When the ladies headed down the hill to begin the second loop though, it was incredible how much of a gap McGarity already had made on the field. A trio of Carmel Yonas, Geaney, and Andrews had continued to stay clear of the rest of the aforementioned ladies. Emily Guy of Mill Creek found her way near the front of the chase pack and was joined by familiar faces Reese Terza and Gabriela Osornio (Hillgrove) as those 2 were trying to lead their troops to a team victory. Isabel Yonas and Frith battle it out late

It remained interesting for the top 10 throughout the entire race as only 20 seconds separated 7th place (Terza - 19:50) and 17th place (Iris Porter of North Gwinnett - 20:10). McGarity ran the fastest time of the day for 18:39. Carmel Yonas held off Emma Geaney as that duo took 2nd and 3rd. Frith and Guy were able to sneak ahead of Isabel Yonas. Terza and previously mentioned Kyra Andrews hung on well to solidify their top 10 finishes with McQueen and Osornio rounding out the final 10 spots. Team-wise, It appeared to be all Marietta early, but Harrison began to emerge as a threat as the race progressed. Hillgrove had the best 1-2-3 punch and looked dominant up top, but their 4 and 5 just weren't quite fast enough to contend on this day. A mere 21 points separated these three teams which was basically what was predicted. What followed was a pretty crazy team chase for 4th that was already mentioned. Milton reigned supreme here with 197 points and the fastest #5 runner of everyone else in the top 10 which may have proved to be the difference. Lots of stories at play here. You had teams like South Forsyth (6th - 217) and Parkview (7th - 220) who were really top heavy and then teams like Lambert (5th - 210) who didn't have a single runner in the top 20. A really dramatic end to the season and one that, if you were on one of those top 9 teams, you can't do much but smile as it could've gone in a variety of directions.