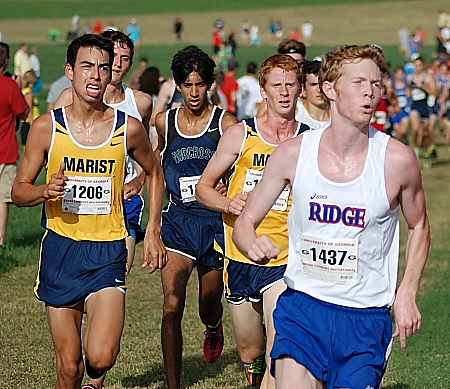 The UGA Cross Country course is on the grounds of the University’s Equestrian Center in Bishop, GA, just a few miles off the UGA campus.  Roughly 4,200 meters of the course is on the open, exposed, gently-rolling pasture land, with nice footing and well-marked paths.  A tree-lined 800 meter section offers a nice mid-race break from the direct sun, although that section is the least spectator-friendly portion given its distance from the starting field.

The course begins with a 250 meter straightaway, followed by a right turn that ultimately takes the runners back behind the starting line and to essentially a complete a circle of the starting field area.  At roughly 1,400 meters, the runners exit the starting field area, run through a gate and then enjoy a gentle downhill stretch where the 1-mile marker resides.  At roughly 1.2 miles, runners begin the 800 meter stretch (mentioned above) in and out of a tree-line, with a series of small and sometimes steep inclines and declines; this stretch is the low-point (elevation wise) of the course.

At about 1.75 miles, the runners exit the woods and being their journey back to the starting field, running along a fence line with on-looking (sometimes) curious horses.  With just under 1k to go, runners re-enter the starting field area, then make another loop of the field (essentially the same loop completed at the beginning of the race) before branching off to the finish line.

Saturday morning found the course in perfect condition, with a tightly-mown path, and firm footing (contrasted with the mudfest of 2009!)

The collegiate races got underway at 7:59 AM, with lots of familiar names on the rosters of the UGA, Georgia Tech and Mercer squads.  The UGA men offered new coach Patrick Cuniff and nice welcome gift with a perfect score of 15, while the Lady Dogs also dominated with a score of 20 in the second race of the day.  While the 8k men’s times didn’t seem that out-of-the-ordinary, the ladies’ times were attention grabbers, with a ton of folks running under 18:00.  This generated a hint of suspicion that maybe a turn was missed or that perhaps something was amiss with the course.  But more on that later…

The High School Championship Boys race got underway just after 9 am, and by then it was getting quite toasty and humid.  No wind to speak of, and a sun getting higher in the sky, and it was clear that the earlier one could get their race under way, the better.  Josh Brickell posted 4:47 at the one mile mark, with only a slight two meter lead on Michael Thurston and Daniel Navarro of Marist.  A step behind was Arman Rehmann of Norcross, Kevin Mills of Peachtree Ridge and Patrick Fleming at Pope.    That lead pack stayed mostly intact for the next five minutes, and just past two miles Brickell had about 5 seconds on Thurston, who had about a 5 second lead on Rehman.   Mills had moved up to the number 4 spot, with Navarro and Fleming holding 5th and 6th.   Flowery Branch’s Nicholas Ashmead and Taylor Fiorello held the 8th and 9th spots, while Norcross’s Nick Delguercio and Walton’s Brian Sullivan rounded out the top 10.

The team race was still up in the air with 1,200 meters to go, with a lot of Marist, Norcross, Peachtree Ridge and Flowery Branch singlets spread through the top-25.

Approaching the team tent area with about 200 meters to go, the buzz in the crowd near the finish line was that Brickell was going to be in the low 15’s.  But with about 100 meters to go, it was clear that he might get under 15, and when he went through the finish line at 14:53 it seemed like something special had just happened, especially this early in the season and under these conditions.  But then Michael Thurston came through in 15:06, and another 9 guys posted sub-16, and the buzz instead turned to whether something might not be right with the course.

Later it was learned that an unconfirmed report had the course at roughly 250 meters short.  An official number might be forthcoming from the UGA folks, but somewhere between 200 and 250 meters seems about right given Saturday’s eye-popping numbers.  Nevertheless, there were some fine performances, and a great race for the team title, with Peachtree Ridge edging Marist by a single point.  Norcross and Flowery Branch also ran very well and backed-up their high early-season rankings. 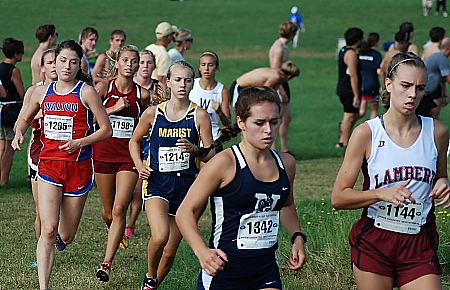 By the 9:35 AM start of the girl’s race, even the spectators were sweating, but the ladies got out fast and showed they were ready to race.   Katherine Yost of Norcross took the lead pack through the one-mile mark in 5:30, with Leanne Zimmer of Lambert, Alexa Womack of Walton, Morgan Ilse of Marist and Megan Charbenau of Lowndes in tow.

Back in the trees, Ilse and Yost put a gap on the chasers, and made it a two-person race for the win.  With roughly 1,000 meters to go, Ilse had a step on Yost, followed by Zimmer a few seconds back in 3rd, Charbenau in 4th, Lassiter’s Morgan Ainslie in 5th, and Alexa Walton of Flowery Branch in 6th.    Freshman newcomers Jenna Gearing of White County and Savannah Carnahan of South Forsyth had also moved into the top-10, as had Stephanie Murphy of Hebron Christian and Ashton Lord of Chapel Hill.

But back to the front, where a huge battle was being waged between Ilse and Yost.  With roughly 600 meters to go, those two had 80 meters on the #3 spot, and Ilse had about 2 steps over her Norcross challenger.  Yost made a move with about 300 and to go, and all of a sudden the race was over as Ilse immediately lost contact.  They disappeared into the tent area, and when they emerged Yost was still moving strongly with 150 meters to go.   Shortly thereafter, Ilse appeared and it was clear the previous 17 minutes had taken their toll on the Marist sophomore.  The real trouble became clear with about 80 meters to go, where she unfortunately fell and was unable to complete the race [but fortunately – based on reports – was able to go home in relatively-good shape after a stint in the UGA medical tent].

The abundance of Marist, Peachtree Ridge and Walton jerseys in the top group left a big question mark as to who would take the team title.   But Walton’s depth carried the day (they were not running at full-strength), while Peachtree Ridge posted a very solid early-season showing.  Marist took 3rd despite losing their top scorer, while Lowndes Co. showed they have some south Georgia talent that can compete nicely with the strong Atlanta programs.

Overall, a great day of racing in challenging Labor Day Weekend conditions.  No huge surprises, but some nice breakout performances and a little short-course controversy!