by Enrique Tomas and Dan McCauley

(all photos by Dan McCauley) 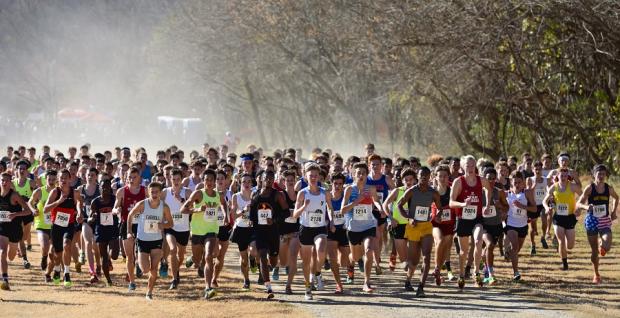 Foot Locker South showcased many of Georgia's finest High School and Middle School runners.  The clear skies and cool temperatures would normally make for ideal racing, but McAlpine fell victim to the extremely dry weather of the season with an overwhelming amount of dust.  The runners fought through large fields and tight packs.  On a positive note, this meet was finally chip timed, lol! When the dust had cleared, three Georgia individuals, Nicole Fegans, Anna Marian Block, and Jacob McLeod, emerged as finalists heading to Foot Locker Nationals in San Diego! 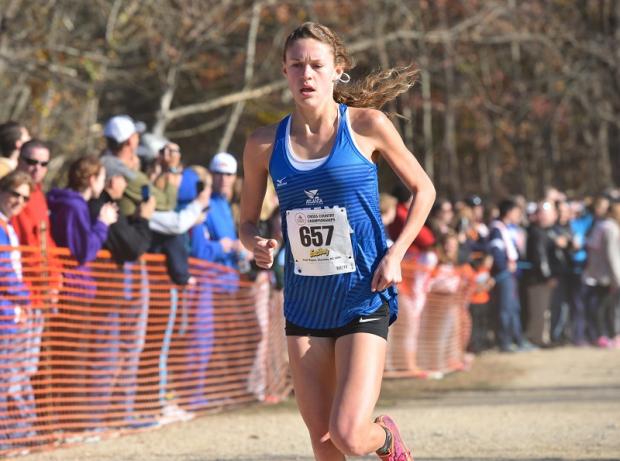 Nicole Fegans punches her ticket for Foot Locker Nats' placing 4th Overall.
The Girls race began at 10 a.m. and was immediately recalled for a fallen runner.  After the restart, the ladies recomposed themselves, and they were off. The field was tightly packed, running 5-6 runners abreast over the first two miles. 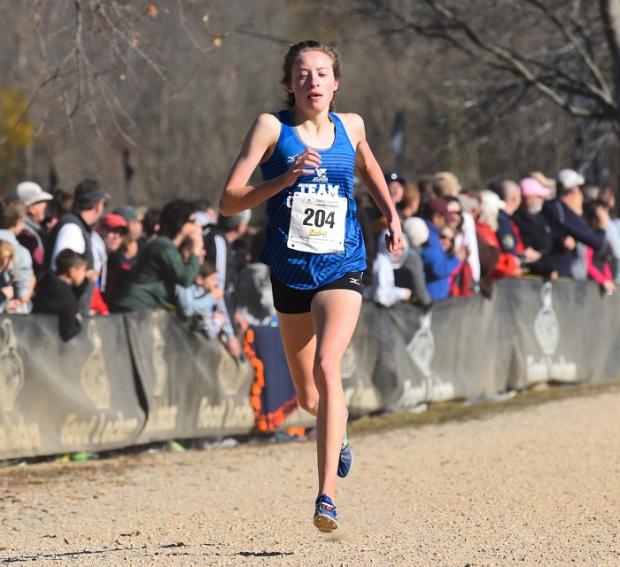 Anna Marian Block of Athens Academy secured the final Q' spot to Nats' taking 10th Overall.
Anna Marian Block led the Georgia contingent through mile one, followed by Georgia's 1A Private State XC Champion Nicole Fegans and the rest of Team Georgia.  Coming up on mile 2, Fegans moved up into the top 5, where she eventually finished in 4th, qualifying for Nationals in a time of 17:26.
Meanwhile, Block had dropped back to around 18th, but she continued to fight hard and, with a scorching third mile, moved all the way up to 10th by the final straightaway.  With 3 girls right on her heels, Anna Marian held strong and finished with a 3 seconds lead on 11th, solidifying her National qualifying spot with her time of 17:52.
Close behind Block was Liz Galarza who took the pace out more slowly than some of her Georgia Teammates, but passed over 20 girls from mile 1 to the end to claim 14th place.  Frosh and 6A State Champion Nyah Hernandez made a strong showing, placing 25th in the Championship race and finishing as 4th Georgian.
Elizabeth Funderburk, after a difficult run at State, redeemed herself and came in 5th from Georgia, claiming the final scoring position for Team Georgia and placing 30th while running an 18:24.
Seeded Boys 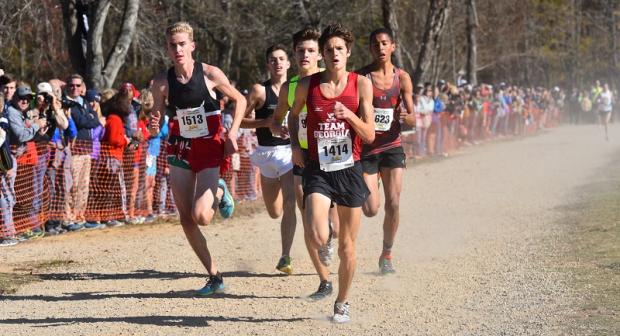 Jacob McLeod held off a bevy a harriers the final 400m, taking 8th Overall, punching his ticket to Foot Locker Nats'!
The Boys race also began with a false start that shook up many of the runners as they sprinted down the starting stretch.  After the recall, the race was off.  Georgia was led by Jacob McLeod and Chase Kennedy who were both positioned well, coming through mile 1 in the top 15.  The top guys were tightly packed, and it got a bit physical as the boys made their way up and around the hill.  Jacob and Chase had moved up into the top 10 hoping for a National qualifying spot.  Chase got tripped up on the downhill, however, getting badly beaten up and leaving all of Georgia's hopes on McLeod.
The junior from Trinity Christian battled with four other competitors as they rounded the lake.  In the end, McLeod held on for eighth place, qualifying for Nationals and finishing in 15:06. Ben Dahlgren of Walton had a solid race, coming across the finish line as Georgia's number two runner in 25th place, followed closely behind by teammate Andrew Singh, who placed 34th.  Sam Bowers, 7A State Champion from Milton, fell 400 meters into the race.  When he got up, he was 10th to last, but he made his way back through the field to finish the race in 33rd in 15:48. Rounding out Georgia's top 5 was Ben McCoy who passed 5 runners in the final 100 meters, including the injured Chase Kennedy who valiantly finished after a devastating fall that required stitches post race.
The Team Georgia Girls placed 3rd Overall, while the Boys placed 4th Overall against incredible competition.  The Georgia Elite 13-14 Boys were victorious as they soundly trounced the competition posting only 17 Team points.  Led by Team Captain Zack Truitt, who earned gold, the Team landed 5 in the top 9 spots.  Congratulations to all of the athletes who competed at Foot Locker South this weekend! 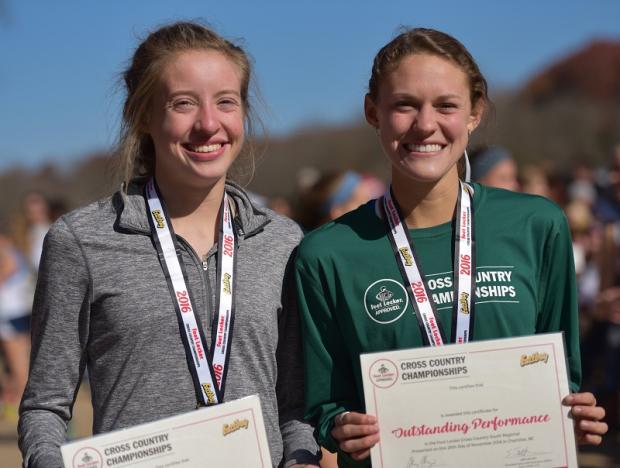 Block and Fegans headed to Nationals!
Now it is time to get ready for Nationals!