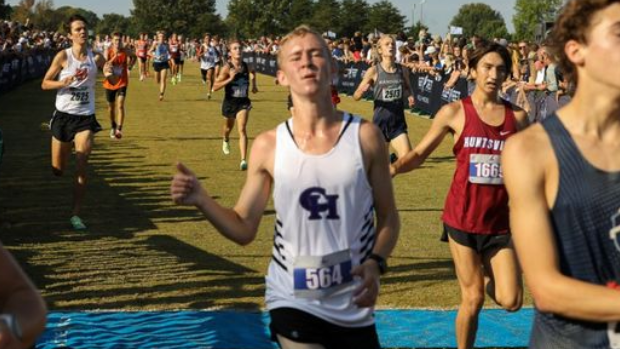 William Herlihy is one of the Unsung Heroes from this week

What a week of racing! We are officially past the halfway point of the season, and things are starting to heat up as the weather cools down. This past weekend, we saw speedy racing at several county championships. Pope boys, finally at full strength, won the Cobb County Championships, and Marietta girls proved their dominance on the ladies' side. Brookwood boys and girls took home the trophies at the Gwinnett County Championships. The Warpath Invitational was another major race this weekend. In addition, many teams elected to race outside of the state. Georgia runners participated in large meets in Florida, North Carolina, South Carolina, Alabama, and Kentucky. What did all of these meets have in common? Nearly all of these races produced some fast times. Looking at the resulting season PRs that followed inspired me to make this week's theme about improvement-not improvement from the start of the season to now, but improvement from across seasons. As you'll see below, many runners have made huge strides this season to find success. In my opinion, making these significant improvements across years is one of the best parts about cross country, so let's give these athletes some kudos!

Greenbrier competed at the Mike Moore Lake Murry Invitational in Chapin, SC near Columbia, where the girls finished sixth out of 30 teams. Allison Sidley, a junior for the Wolfpack, had the race of her life, running a 19:57. Last season, Sidley did not break 21 minutes until the Meet of Champions. She has since worked hard during track season and all the way through this XC season, and she has closed the gap between herself and star teammate Millie Quick to give Greenbrier a potent 1-2 punch. Sidley's time ranks her fifth in 5A so far this year, and with the team battle still wide open, Sidley's improvement could be a difference-maker for herself individually and for the team come November.

A quick look at the 4A individual rankings reveals runners from familiar teams towards the top of the list: Pace Academy, North Hall, Starr's Mill, Westminster, Lovett. However, Whitewater is surprising with two runners ranked in the top 20, led by junior Brianna Valadao. Valadao bested her previous fastest 5k time by twelve seconds, but even that is underselling her improvement. At each of her three races this season, Valadao has run faster than she did last year at those meets, with her last two races being improvements of 30 seconds over her 2021 times. She showed at The Southern Showcase that she can be the top runner for Whitewater, and now it's just a matter of how fast she will run by the end of the season.

I'll try to describe the improvement that Spence has made this year in a way that does justice to her achievements. Last season, Spence ran a 28:26 at the state meet, a time that was on par with her other races, especially when taking into account the difficulty of the Carrollton course. That placed her 76th in the 1A Public race. This year, in just her first 5k of the season at the Deerfield Windsor Invitational, Spence ran a time that currently ranks her sixth in all of 1A-DII. She showed earlier in the season that her improvement was not a fluke with a 15:42 in a two-mile race. She has also leapfrogged teammate Gracie Morrical, who is having a solid season herself, to be the front-runner for Baconton Charter. It's a remarkable improvement for Spence, and since this past weekend only represented her first 5k of the season, there could be even more improvement for her in the future.

It's always nice to have siblings together on a cross country team, as they often can push each other to improve. Rarely, however, do two siblings push each other to improve to the extent that Finn and William Herlihy have this season for Chapel Hill, especially as juniors. Both Herlihy brothers came into the season with PRs above 17:18. Both had excellent track seasons that hinted at the improvement that was to come in the fall. The two Herlihy brothers have since run three races each under 17:00 this season. I think it's safe to say that Finn and William will drastically improve their finishes in the state meet this year compared to last year, where they finished 74th and 83rd, respectively. Together with teammate Solomon Johnson, they give Chapel Hill a trio that compete with just about any in the state.

Fessler, a senior for Stephens County, only has times on MileSplit dating back to his sophomore track campaign. That season, he steadily improved from 5:33 to 5:09 in the 1600. That has been his running career in a nutshell-steady improvement that so far has no end in sight. Last season, Fessler's best time was 18:34. This season, through two races, the slowest time Fessler has run is 17:21 at the North Georgia Championships. In fact, he finished in the top three in fields of 140+ in both of his races. Most recently, at the Dragon Invitational in Jefferson, Fessler ran his first sub-17:00 race on a course that is no pancake, besting many sub-4:50 milers in the process. This season, he is a top 10 contender in 3A.

If they gave out an award for Most Improved Four-Year Runner, Canaan Ponce would win that award in a heartbeat. A senior from Cook High School in Adel, Georgia (near Valdosta), Ponce was a 29:00 5k runner his freshman year. The following season, he ran in the 24:00 range, including a 23:58 at his first state meet. Last year, he took a big step, breaking 20:00 and even 19:00 for the first time, culminating in a 5th place finish at region 1-AA and a 19:53 at state. However, this year he has kicked into fourth gear. Ponce has finished in the top 10 in every one of his six races so far, and he has finished under 17:10 twice. He finished fifth at the 169-runner varsity boys race at the Deerfield-Windsor Invitational. It would be quite the story if Ponce could finish in the top five at the 2A state meet, and it's looking like a real possibility now.