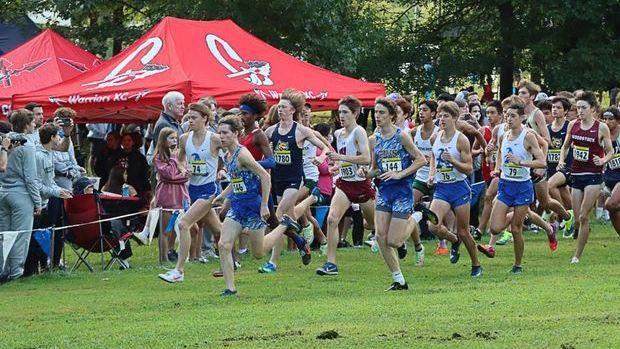 The start of the boys race last year. Photo by Marc Logan

Ahh... Labor Day Weekend.  After this weekend, just about everyone will have made their debuts and we can begin to make sense of what we've seen up to this point.  It's always exciting to see how things begin to settle in.  It's crazy to think that State is already right at 2 months away.  AT&T/Starr's Mill has become a really big meet and has long attracted teams from Alabama to race against their GA neighbors, and this year is no different.  Let's take a look at the slate!

A fairly regular name to the GA scene is Auburn out of Auburn, AL, and they're the on-paper favorite this weekend. Led by senior Maxwell Hardin who is the on-paper favorite to win the meet with a career PR of 15:04, Auburn features plenty of depth that will be tough for the home state to compete with.  Thomas Parnell, Braden Ball, and Bailey Wade have all gone 16:42 or faster, and while their current 5th is over 17:00, it will take someone having a big day to be able to compete with these guys.  Whitefield Academy appears to be one of the first teams in line to do this. Taylor Wade leads WA and is followed closely by Andrew Rothwell, both of whom feature as individual favorites and both of whom have broken 16:00 in their respective careers.  Bo Mitchell and Riley Hugues will be looked upon heavily for help here, and the ever important 5th man will potentially be a huge factor as this is a pretty dense field.  Starrs Mill, a surefire 4A powerhouse and obviously the meet host, is also a team to watch here.  The duo of Nat Miller and Grant Dougher will pace this squad and will be supported by Bankson Roach, Denver Oates, and Ethan Aguilera-Morton.  Our first 7A sighting, Harrison, should also factor in.  They've got the nastiest freshman class that I can think of in recent memory in Clint Huggins, Alex Albano, Grayson Swingley, and Andy Burke.  Of course, the veteran leadership of Sterling Sellier (who is really starting to rise to the top) and Bryce Brownlee will pave the way for these rookies.  Could they pull it off?  Squads like Westminster, Mill Creek, St. Pius X, McIntosh, Paideia, and Chapel Hill are also teams to ensure we don't forget about.

Hardin of Auburn, whose season ended early last year, enters as the on-paper favorite thanks to his 15:04.  He performed well in the Spring and won Auburn's opener in a 3K last week.  Also, he's this meet's defending champion!  He won in 15:29 last year, so we can only imagine he wants to repeat this year.  Teammate Parnell is coming along too as he was only 8 seconds behind Hardin at their opener.  He seems to have made a huge jump; can he contend. Wade of Whitefield just won Bob Blastow and will obviously be in the mix.  Look for him to be shoulder to shoulder with Hardin in the early goings.  Luke Kalarickal of Mill Creek is the lone stud returner from Mill Creek's State Championship team last year and has had a solid start to his season though I'm sure he's wanting more.  Can he stick his nose up there yet?  Hayes Trapp of Augusta Prep makes his season debut this weekend and was 5th at this meet a year ago.  He also too 3rd in the 5000m at Adidas Outdoor and went 9:17 at Music City; he could be in for a monster season and can potentially win this thing.  The ever dangerous Tommy Latham of Marist and rising stud Sellier of Harrison could be a couple guys that show out in a dense field like this.  Other top 10 threats include Rothwell (Whitefield), Marc Petrucci (Collins Hill), the Westminster duo of Joseph Jacquot and Esfan Daya, St. Pius X's Brian Knuth, the Starr's mill duo of Miller and Dougher, and McIntosh's Caleb Kreitner.

St. Pius X looks set to make their debut this weekend and feature 3 girls in the top (on-paper) 11.  Seniors Hannah Schemmel and Grace Von Biberstein have both had their share of injuries and some bad luck, but both appear set to debut and should pace the Golden Lions.  Zoe Garcia, Jessica Sheehan, Maggie White, and Lane Boyle have all run between 18:59 and 19:57, and that sort of depth could just be too much for anyone else to overcome should they indeed be full strength on Saturday.  Harrison is a squad who could come in and play a bit of a spoiler as they should be more 'race ready' given their early season thus far.  Samantha McGarity is a name I'll be typing quite often this season, and she features as a heavy individual favorite and will lead the Hoyas to wherever they culminate this season.  The support of Kate Curtis and Lidia Longo can't be understated though, and their 4th and 5th moving up this race could spell trouble for the rest of the field.  Auburn (AL) has a very impressive top 3 in Rylee Plexico, Olivia Tole, and EV McGowan that will look to mix themselves in with some of GA's best.  Throw in their 4th and 5th in Linnea Cox and Audrey Erath, and you've got a team with 5 in the projected top 30... that'll be tough for anyone to beat.  McIntosh is a squad that could be scary good this year.  Marist, another mainstay in team competition especially on the girls' side, will always find their way near the top in any competition they enter.  Household name Ruby Little will look to teammates Kate Selover, Maeve Waddell, and Stella Chambless for help in keeping pace with the other teams mentioned here.  Others to keep in mind include the host Starrs Mill, Mill Creek, and Bayside Academy (AL).

This has the makings of an instant classic with Little (Marist), Schemmel and Von Biberstein (St. Pius X), McGarity (Harrison), Shari Brown (Landmark), and Clara Heppner (Johnson Ferry) all officially entered.  Each of these ladies boasts an incredible resume.  They've all won big events, all feature as among the best in not just GA but the southeast, and all will probably spend a good portion of the season beating each other up. The winner of the race almost certainly will come from that list.  The Auburn duo of Plexico and Tole are surefire top 5-10 threats in their own rights though.  Tole was 6th here last year so does have some good course experience and is 2nd among returners (McGarity was 2nd last year to Cara Joyce of AIS).  Lottie Chappell (North Springs), Adley Burkes (Central), Garcia (St. Pius X), and Annie Midyett (Bayside Academy) have all broken 19:00 heading into this meet, so all should be trying to bully their way into the top 10 early and maintain.  This girls' field appears a little deeper in general than the boys', so don't be surprised if there's a big rush to the front early on that takes a while to begin the typical 'spread' that we see pretty often in top level girls' competition.