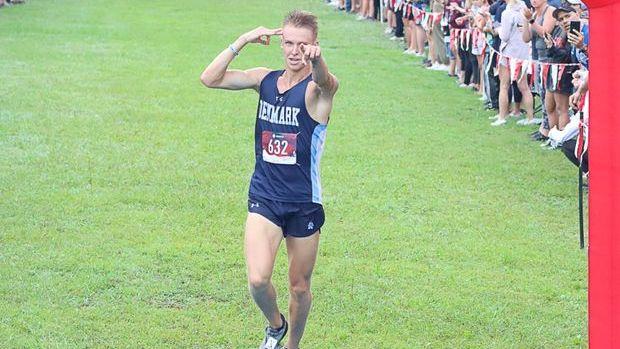 Ethan Ashley will be there running for a fast time and you should come too. Photo by Marc Logan

The top boys and girls in the state will be there gunning for some very fast times, so just coming to watch it will be a lot of fun. But here are a few reasons why coaches think as many runners as possible should do the 2021 Hillgrove XC 3200 Twilight. Milesplit will also be on site shooting pictures and video of the kids running fast!

First reason for starting the 3200 is to motivate my athletes for track. I am a big believer in aerobic fitness which I think we as coaches do a good job developing during cross country. I think the temptation is to back off of aerobic development during track and focus on shorter, faster intervals. I like this 3200 at the end of cross-country season to show my athletes that they can run a fast 3200 off of cross-country fitness. I also think it shows the importance and power of aerobic fitness. Last year we had many athletes PR in this event.

Another reason for the 3200 is the timing, both for athletes running post season races like Footlocker, NXR or RunningLane and those who are not. Any of our cross-country athletes who are running track run this race. For some of them, this is their last race of the cross-country season. This then allows them to take their break during Thanksgiving break where they can focus on relaxing and spending time with family. For those on our team who are doing post season racing, the 3200 provides the opportunity for a nice tune up session leading in to those post season races. The timing of the 3200 is strategically placed. It is two weeks after the state meet which allows athletes to recover physically and mentally from state. I know in my experience, my athletes come back the Monday after state exhausted both physically and mentally. The two weeks is a nice recovery time. The 3200 is also 8 days our from both Footlocker South and NXR. This gives the athletes enough time to recover from the 3200. It also is shorter than a 5k so recovery time is shorter. The 3200 is a good VO2max stimulus heading into these post season races.

A final reason for starting the 3200 is to try to provide an opportunity for the top boys and girls in the state to be able to race head-to-head in a 3200 on the track. During track season this is very difficult due to different teams having different meet schedules and limited number of entries. Having the 3200 at the end of cross-country season allows any athlete to enter and we can have as many entries as we want.

It's on a Friday night! My athletes always love to race on Friday nights, and based on results I've seen in the 20 years I've been involved with this sport, it's not just my athletes. There's just something about being under the lights on a Friday night that brings out the best in runners. I can't explain, but there's always something magical about it. I've seen kids run massive PR's in track season when they race on Friday night, but I've also seen it during XC season too. Atlanta track club started doing Wingfoot on Friday night and the times have been very impressive for September on a hilly course. So putting them on a track can make things even better. North Carolina has a 3200 on this date every year and it produces massive PR's for the athletes. Tennessee has followed suit a few years and seen similar results and so I would love for Georgia to have a tradition of doing the same every year.

When you're in shape, you run PR's. Every year we do a JV mile time trial (and I know many other teams do the same) two days after the region meet  and we see kids run massive mile PR's. The reason is that when you're in great shape and you have good weather, you run fast times. Everybody is in great shape right now because it's the end of the cross country season, so you might as well go out and run some PR's. We did this a few years ago at Pius and just take a look at the times that were run in that race - 2019 Post Season Time Trials

For years now, schools have hosted post-season 3200m races - St. Pius X, Parkview, and Hillgrove namely - and each time, the race has produced PRs, sometimes massive, across a variety of skill levels.  The reasoning is simple:  Athletes are enjoying a reprieve from Georgia's stupid heat and humidity, athletes are in peak physical fitness due to trying to race their best at Region, State, or a post-season meet of their choice, and athletes are placed in fields far smaller than traditional invitationals with athletes of similar skill.  The pressure is also far lower as these time trials occur in a more casual atmosphere with nothing "really" on the line.

As a coach, I've always liked to use it as a measuring stick for a 3200m time that I want my athletes to try and beat during Track season.  If I have a kid run a PR at this, it then motivates them to continue training over those more lonely winter months in order to chase that PR come March or later.  I've seen kids both "ride the wave" and maintain their hot streak at a post season 3200m, and I've also seen kids redeem what they felt was a subpar State Meet with a big race at one of these.

But ultimately?  These are just fun.  They're fun for the athletes, they're fun for the coaches, and they're fun for the parents, friends, and fans.  What better way to kick off your Thanksgiving break (assuming you're among the lucky ones who get a full week off school) than run a 3200m PR in awesome weather with dozens of your closest friends?  Wait... you can't think of anything better?  And you have $5 to spend?  I thought so.  Unless you need someone to sing you happy birthday... I don't have farm animals, but I do have a far-cuter-than-intelligent Cavalier King Charles Spaniel.