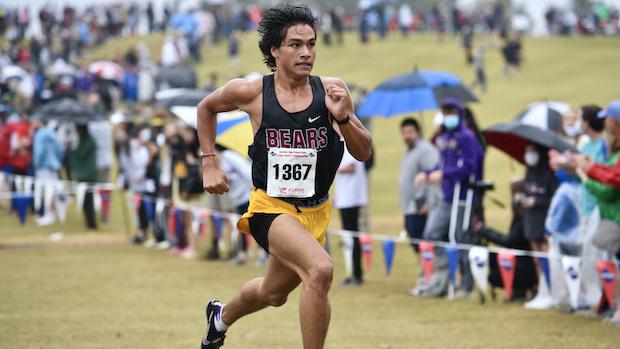 Joe Sapone has had a great start to his season. Photo by Dan McCauley

On Sept. 10th, 2021, our cross country team boarded a 35-passenger bus headed for Huntsville. They were equipped with one bagel each, too much water, and countless boxes of Skippy Creamy, whatever that is. The agenda called for staying at some hotel - said hotel paid for by giving the athletic credit card a minor hernia - then return on Saturday after the four races. This is a recount, mostly truthful except where I took journalistic liberties, of what went down:

There's always one, you know, and did she not get the latest of our 15 emails? It almost specifically stated when we'd be leaving and where from, giving the vast majority of us the full information.

Never mind, there she comes - and she's carrying a bag at least three times her size. We're staying just one night, but she's packed for the next eclipse, and it makes me smile for just being a guy. After all, I'm armed with a toothbrush in my left pocket, cell phone in my right, and a novel tucked neatly between the seats. Seriously, is there anything else needed?

Later: We pass places such as Summerville, and Fort Payne, Good Hope and Tuscumbia. (I can't believe my computer didn't put a red line under Tuscumbia. Hmm, I guess it's me). Anyway, we're in Alabama, the state where Nick Saban could run for God and pretty much get elected.

We're at the hotel - Jayaraj is passing out room keys. Apparently, I'm in 213 - a number that means nothing to me. Though I don't snore, I burp quietly, and I talk more in my sleep than to my mate, it appears on this trip this is my reward. I can turn the thermostat on bake because I hate being cold. I can wake up at 2:38 a.m. and correct at least some of my typos in this story and others. I can watch That 70s Show and laugh out loud.

Instead, I watch our football game, one where things don't go our way. Better now than never - and anyway it's a good thing - because I love to see the final results when good kids get back up. I know this from overcoming my depression - I have to keep myself EVERY SINGLE DAY from telling and writing that story - about the luxury of hitting rock bottom only to rise again, and about how, if I can do it, then anybody can.

I'll tell the kids that if they ask. They won't, so instead I just go to sleep.

Alarm clock sounds at dark thirty. Do you know where your team is? Better yet, do you know where YOU are? No to both, but it's okay. Have you never gotten up on automatic pilot, walked to where YOUR bathroom back home is, and bumped face first into a wall? Oh well, let's move on.

Race talk: Our top runner runs as if he has an electric fence wired to his back side. If I were still a sportswriter, I'd write that but perhaps it would get edited out by the posh private school back home. He crosses the line first - crosses in 15:26:12, which, to translate, is somewhere between light and warp speed.

His grandmother - standing next to me - is grinning so big it's going to take four plastic surgeries to get the glow off her face. Dad takes a picture - our runner in the double-armed victory raise, the sacred clock ticking, but stopping for our guy first among the 364-runner field.

The rest of the boys come in strong - a junior runs a 17:54, which prompts Jayaraj to perhaps suggest he should drop baseball, but I don't want to pry. Part of me agrees, though the other part suggests that - since you pay a kidney and a spleen to go here - then do it all. Be a verb.

Our girls prove not only close-knit off the course but on it - you could throw a net over our top five. The question in October and November will be, is the train fast enough to do damage in Carrollton? Stay tuned.

Back on the bus: While I'm half asleep, dreaming of a non-adult beverage and whether or not I can talk my girlfriend into massaging my sore shoulder, Jayaraj is firing off races and times and paces. How does he know all this stuff? To think, I had friends in Florida who called ME Rain Man. What can I say - I have met my master.

We go to a Chick Fil-A where we can't eat inside because of COVID. I had boat oars stuck up my nose twice getting tested for COVID but that's another story. I'm not saying the stick went so far up into my brain but, all of a sudden and for some reason, I knew that the definition of a rational number is any number in the form of A over B where A and B are integers and B is not equal to zero.

This is key information I wish I'd had during test time in 8th grade. Somehow now, to this day, I know this, and I'm not sure why. Still, I smile - at least I still don't understand logarithms. There's hope, you know, always hope.

The kids are watching football on their phones. One of our seniors unfortunately ended up in the medical tent and didn't finish the race She's a transfer and I'm pulling for her with all my heart. Still, she's smiling now, blending in.

Sometimes the secret is just to let things come to you. If it takes a medical tent in Huntsville, then so dang be it. Bless her, even though I hate trying to spell her last name in my reports.

Moving on, literally: the hum of the road - Tuscumbia again appearing and disappearing, Adairsville in the rear-view mirror, a text from my girlfriend, a story to write about this trip, how we'd done if we'd this runner or that, why does Georgia play UAB in football, when am I going to write my chapel speech, and...about that shoulder massage...

Jayaraj - and that large brain of his - is dead to the world in the next aisle. He's out, but he deserves that for now. Cell phones and computers have to be reset, so does a Jayaraj. I smile, dream of first sip which is set for somewhere around 6:00 p.m. and I laugh in satisfaction when the bus rolls in at 5:34 p.m.

After all, how could I not?