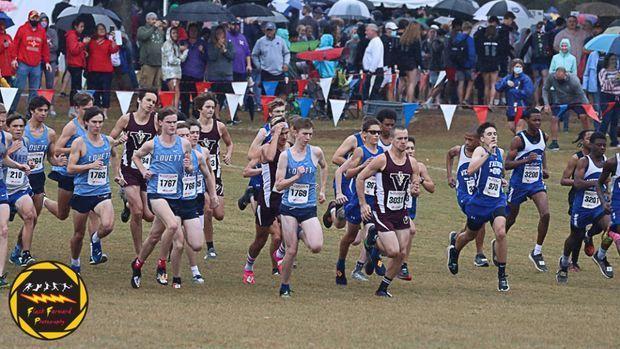 The Start of the 2A boys race which Lovett won in a tight battle with Pace Academy.

Although we are a couple of weeks into the 2021 season very few 2A teams have chosen to run in the early part of the season.  It will be interesting to see how the class unfolds over the next several weeks before the first rankings come out.  However based on returners from the 2020 season it looks like much of the Top 10 teams on both the girls and boys teams will remain much the same, minus some shuffling around.  Will there be some surprise teams that emerge as contenders that historically are not in the Top 10?

Looking back on the 2020 season and results there are a few things that stand out as issues that teams will have to contend with during the 2021 season.

Let's look at those points a little closer and how it may shake up the landscape of the top ten or so teams for both the boys and the girls squads.

On the boys side defending state champions Lovett graduated four of their top seven, while the 2A state runner-ups Pace Academy only lost two to graduation.  Banks County came away unscathed by graduation, while Jeff Davis, Bleckley, Oglethorpe, and Model all lost one senior.  Other top teams Bremen and Vidalia lost two and three each to graduation.

Then the issue of depth that follows graduation comes into play for most teams.  The two privates Lovett and Pace typically have a stable full of talent that are waiting their turn to rise to the occasion.  Can the public schools in the mix overcome the loss of quality seniors and develop new talent to compete with the top two teams?  Other boys teams to keep an eye on are: Fannin, Union, Dade, and Lamar.

Now let's look at the same two issues on the girls side.  The defending state champs Pace Academy graduated two of their top seven but looks to have enough returning depth to keep them in the top spot.  While runner-up Lovett lost four of their top five, but they have been able to reload every year in recent memory.  Coach Crandford's Bleckley County squad will be hungry to get back to the top spot after being knocked off by the two private schools after winning four titles in a row (2016-2019).

A group of six, Oglethorpe, Jeff Davis, Fannin, Rabun, Coosa, and Vidalia will battle for that last podium spot on the girls side.  The team that comes out on top will most likely have the most depth, having quality runners deep into the rotation at number five, six, seven, and maybe even deeper.  After the group of six that should battle for the remaining podium spot it's all up in the air to see who can fill those other top ten spots.  Teams to keep in the talks will be: Bremen, Banks, Berrien, Union, Model, and Jasper/Monticello.

Individually for the boys Edward Blaha (Pace Academy) looks to defend his state title, while teammate Grant Thompson should push him for that top spot.  Other top returners include: Buck Ledford (Banks), Simon Schabort (Model), and Luke Churchwell (Bleckley).

Finally all this being said with the rise in Covid numbers across the state anything can happen.  With low participation numbers on many of the 2A teams it will be the teams that stay healthy, injury free, and recruit enough quality runners that will have a chance to make a statement during the 2021 season.  Good luck to all the 2A schools during the 2021 season!