It was another great day of racing at Nash Farms Battlefield as 7 races were contested with nearly 2500 runners crossing the finish line.  Temps began in the low 70's, which wouldn't have been so bad, but humidity was almost 100%, and, by mid-morning, conditions grew worse, with the rising heat reaching the 80's by 11am. MileSplit GA was onsite, and race video was posted Saturday evening.  In addition, Daniel McCauley was hard at work shooting cover shots. This race got the party started as 346 runners took on the pastoral rolling hills of Nash Farms Battlefield, which was the site of the largest US cavalry raid in Georgia's history and a huge Confederate campsite. The race was an intense battle up front, with the usual suspects jousting for position, including Kamari Miller of Marietta and Sam Rich of Lakeside Evans, with upstart Collin Jones of Carrollton digging in. Justin Wachtel of Mary Persons was testing a different strategy and hung back from the lead pack, but on the 2nd mile began to pick people off and turned in a blistering final mile separating from the leaders and crossing the finish line for the win in 15:50 Miller of Marietta nipped Rich of Lakeside Evans just before touching the mats, taking runner-up honors at 16:04.21 and leading the Blue Devils to a 2nd place team finish. Sam Rich was just a stride back for 3rd overall at 16:04.36. Chris Cherono of Grayson placed 4th, going 16:06, and Cole Heron of Pope took 5th place at 16:09.  Collin Jones from Carrollton had a strong race taking 9th overall in 16:17. The team race was a 7A state preview and quite close as Brennan Bower of South Forsyth led the Eagles to the win, himself placing 7th overall at 16:13, with teammates Harrison Siegel 23rd, frosh Ben Bergey 24th, Joe Pontrelli 27th, and Michael Patterson 31st. Marietta HS was 2nd as a team led by Miller's overall runnerup finish, frosh Jared Fortenberry crossed 16th, and James May placed 21st. Brookwood was 3rd, 3 points back, with Luke McNeil 12th (16:27), Will Bray 18th, and Seth Wheeler 19th. 5A Decatur was 4th, placing a pair of harriers in the top 10, including Eoin McNally 6th (16:10) and Christian Gonzalez 8th (16:15). Emily Little of Marist was never challenged after Mile 1

Marist is going to be one of the best squads All Classes this Fall, and they proved it by winning the team title by 69 points without top returner Kathleen Schellman's services. Emily Little has benefitted from excellent coaching since transferring to Marist last Fall and put it all together Saturday, taking the lead after the first mile, creating a big gap separating from the lead pack, running very smoothly (watch the video), and cruised in for the Overall title, clocking an 18:52. The War Eagles 2-5 runners had a split of :23 all placing in the top 20, including Nora Solomon 11th, Ellie Pittman 13th, Nicole Pizzo 18th, and LJ Watson 20th. Battle of Atlanta Champs Marist Girls were unstoppable as usual

Sr Kayla Gholar from Richmond Hill had a great run, taking runner-up honors in 19:09. Laney Doster from central GA school Jones County finished 3rd overall, posting a 19:16.  June Mwaniki of Marietta HS led the Devils to 2nd place, teamwise placing 4th Overall at 19:24.  Defending 7A champ South Forsyth was 1 point back and displayed some depth from 2-5. The Eagles top runner was Madelynne Cadeau who came in 15th (20:16). 6A Pope was within striking distance 8 points back and were once again led by freshman Charlotte Dunn who was 5th Overall in 19:32, with Lorel Golden 10th place at 20:01. Rounding out the top 10 individuals were Cara Joyce of Atlanta International, crossing in 6th with 19:36, Reese Saddler of Brookwood, 7th at 19:46, Luna McCauley of Paideia (who led the first mile), placing 8th at 19:58, and Gabby Parsons of Union Grove HS, 9th at 20:01, and Lorel Golden of Pope 20:01 in 10th place. Madison Kennedy, now at Evans HS, ran in the JV race Saturday dominating from the gun and won going away in a time of 20:26  Always loaded, Marist displayed their program depth scoring 28 points placing 5 runners in the top 11 spots with freshman Emily Delmonte leading the pack taking 3rd overall in 21:49  Marietta HS had 3 girls in the top 7 including a trio of 8th graders!!  Gabi Comsudes was 2nd (21:48), Brooklyn McVicker 4th (22:00) and Nora Hart 7th (22:26) Brookwood was 2nd place as a team led by frosh Mary Kate Weitzel.

Brookwood handily won the JV Boys team race with 3 runners in the top 8 including Jr Dylan Shust who was the overall winner posting a 18:33. Frosh Ani Tesfaye from Loganville was 2nd place at 18:37, East Coweta had a pair of runners in the top 4 led by Nate Maples (18:47) and Houston Hamby (18:48) Pope's Paxton O'Shaughnessy took 5th overall in a time of 19:02 leading the Greyhounds to 3rd as a team. Marist was 2nd in the team standings with Lorenzo Gastaldi 11th overall. 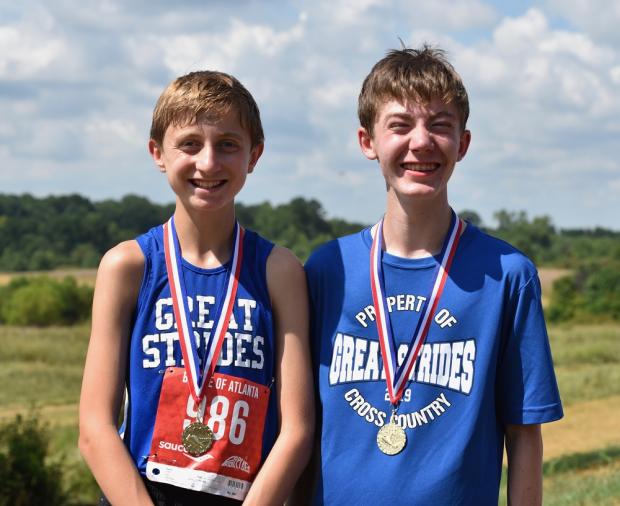 In what has to be one of largest MS fields ever assembled in state history, 438 runners lined up and formed a long wild freight train of a finish down the homestretch! The Great Strides Club made mince meet of the field placing 5 boys in the top 8 spots and their top 7 all sub 12 minutes. Claire Petersen of Mount Bethel Christian came from behind to seize the Individual title turning in a nice time of 11:49 Great Strides easily made it a sweep of the MS team titles with an 89 point margin of victory. Morgan Grace Sheffield led the way taking 2nd overall in a time of 12:02 with team mate Paige Harden 7th at 13:03. Rounding out the top 5 individuals were Elizabeth Stamey of High Meadows at 12:17, Eva Murphy from Inman MS 12:18 and Hailey Allen from Loganville MS 5th at 12:29  Holy Innocents was 2nd as a team followed by Renfroe MS.