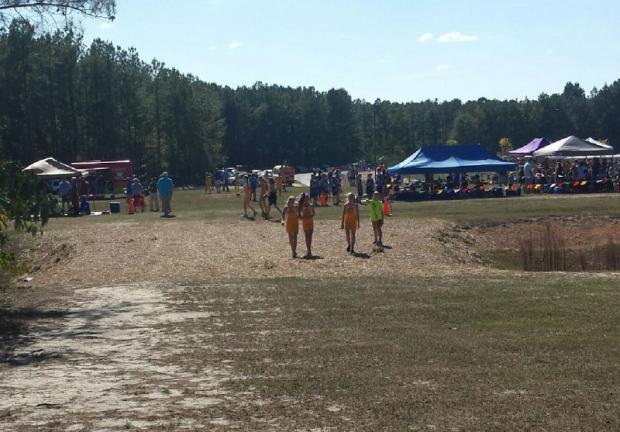 Fans will love the new 'Land Bridge' at Bleckley instead of traversing thru the big ditch!

The MS State Championship began 10 years ago with only 11 teams and 216 athletes. Since that time, it has grown exponentially (especially from 2008) when gatfxc.com covered the meet. Now, its no surprise that nearly 100 squads, almost 2100 runners (including over 50 individual entries) gather every 3rd Saturday down in Cochran, for quite a festival like atmosphere with great southern hospitality. The only thing missing is maybe a good local Country/Southern rock band playing on the awards stand, lol. There are now 3 separate divisions including:

Large School- 5A thru 7A

Each division now has its own Mixed JV race due to growth of the meet. Races begin at 8am.

Its difficult to gauge what teams will be top contenders, because of the many race distances MS courses in Georgia may be. The runners who have 2 Mile and maybe an XC 5K under their belt, could have an advantage on those who mainly race at 3000m and shorter tracks.

This will be the largest Championship race of the day. Team contenders are hard to judge, but you can count on a few programs to be strong every year such as Holy Innocents (2015 Champs), Cornerstone Christian, Bleckley County MS, Hebron Christian, Georgia Military Prep, Darlington,  George Walton and Paideia.

For Small School Girls, Hebron Christian will be back to defend their 2015 title. But, will be chased hard by Holy Innocents *who won the Best Overall Program Award in 2015. Also in the team mix for those HUGE trophies could be: Cornerstone Christian, Paideia, host school Bleckley MS (who beat Medium School power Malcom Bridge on their turf), Oglethorpe County MS, George Walton and Darlington.

2015 Champ Westminster (ATL), put together a team days before the meet, but have chosen to not make the trip this Fall. Marist has won the title a few times and was runnerup last season. If one looks at the Virtual meet article its going to be very competitive with top contenders being: Lovett, Marist, Cartersville MS, Clear Creek MS, Malcom Bridge MS and Hart County MS.

Marist's low key MS program has made a tradition of swooping down to Cochran with a top 7, snatching the top awards and motoring back to ATL. Its very possible though, that with Lovett moving up in class, the War Eagles could get pushed, including Cartersville, Clear Creek MS, Hart County and Malcom Bridge.

Awards given out as soon as results are finalized