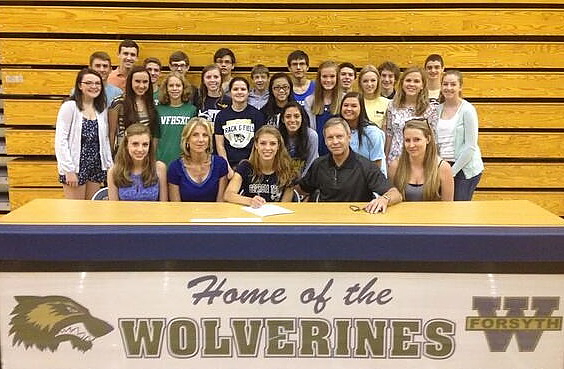 Haley Anderson from West Forsyth HS recently signed her NLI with Georgia Tech. Up until her senior year, Haley was a high school tennis player, former cheerleader & former gymnast,  who ran only recreationally to stay in shape.  In the signing picture, Haley is seated with her parents and sisters and supported behind by her teammates and friends. 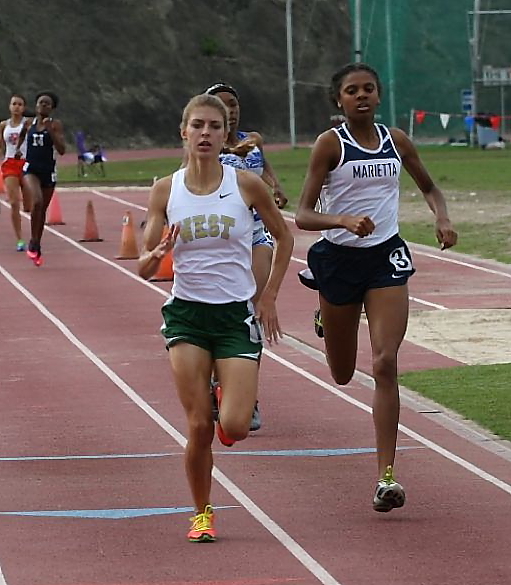 The second picture is Haley winning her qualifying round in the 800M at state in Albany a few weeks ago.
Haley’s story is a pretty interesting one….
Up until her senior year, Haley was a high school tennis player, former cheerleader & former gymnast,  who ran only recreationally to stay in shape. She had been encouraged to give Cross Country a try by coach Tillery as a sophomore after running a PE class mile,  but Haley chose not participate because she feared she would be embarrassing bad at the sport.   Never the less, she eventually joined the XC team as a senior and 4 months later, Haley surprised everyone, including herself, when she placed 10th at 6A state meet in Carrollton.
While continuing to play tennis for her high school team this Spring, whom she would not abandon during her senior year, Haley had an outstanding track season.  She placed 3rd at 6A state in both the 1600M (5:04.23) and the 800M (2:15.75).   Both times are school records. During the first ten months of structured running in her life, Haley achieved three state meet podium appearances and earned a scholarship to run in college at Georgia Tech.
Pretty cool!   Huh?
Bailey Goggans -- 2:04.70 At SNLs Saturday Night Lights Aug 3, 2020
Jibril Syed 400m Time Trial -- 49.79 Aug 3, 2020
Toeing the Line ILMOC and IHSA Schedule Aug 3, 2020
Team Blaze girls 11-12 4x100m Southeastern Youth Club Championship Aug 2, 2020
Mimi McHugh second in girls Gold Division Aug 2, 2020
Illinoisian Tori Thompson talks competing in Texas Aug 2, 2020
Tweets by GAMilesplit