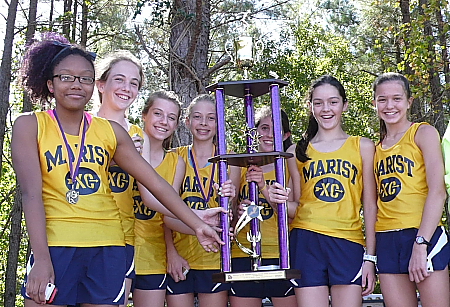 The Marist Girls literally ran away with Large School Title down in Cochran. Image Courtesy of Adrian V Popescu

Wow, what a day of great racing this Saturday down in Cochran at the 7th Annual Georgia State Middle School State Championships. The meet was flawlessly ran by Coach Shelley Cranford's Running Royals and all the races ran on time as well. The attendance was visibly the largest and loudest ever as well. 4 Team Champs were crowned including 4 well deserving Individual Champions. The races were equally competitive in the Large and Small School divisions individually and teamwise as runners frantically battled for places up the short straight final uphill stretch. 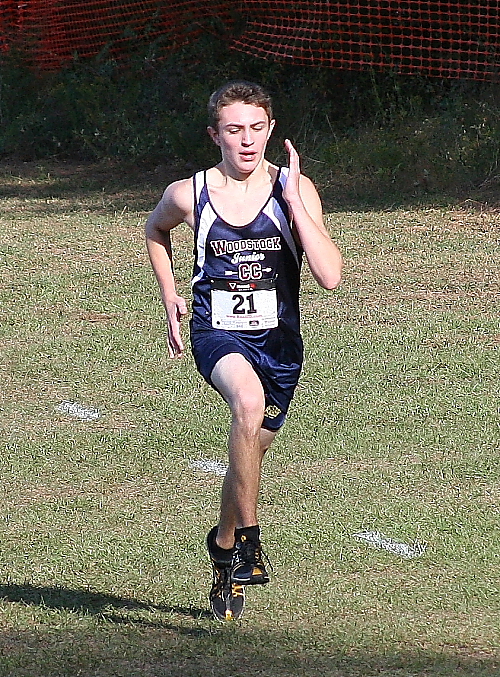 The Championship races began with LS Boys at 9am and in the cool windy weather they put on a show for fans as nearly all of the top MS Individuals toed the line as Sean Parker (running as an individual) took the first State title of the day clocking a meet best 11:11 outlasting Nicholas Wootten (another individual) who took runnerup honors in 11:14  Grayson Rolf competed for McClure MS Mustangs placing 3rd being the 1st Team runner to cross the finish line at 11:19 Completing the top 5 were Luis Perez in 4th at 11:28 with Perry's Tanner Reed (7th grade) right behind in 11:29  There was slight glitch in the Team scoring that has been corrected that only lowered all team's scores with no places being altered with Gainesville MS racing to win scoring 70 points led by their top gun Jake Hudson who placed 7th overall with a time of 11:31  Woodland Euharle repated as Large School team runnerups scoring 101 points with Nicholas Warren leading their attack. Marist showed more talent on the MS level placing 3rd paced by Gus Eckstein's 13th overall finish. 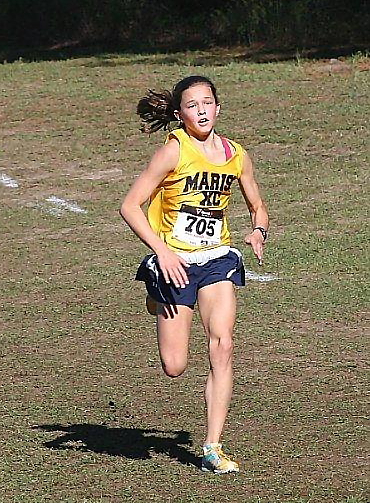 Kendall Nelson of Marist had the Best Girls Performance of the Meet at 12:25  ga.milesplit file phote

The Large School Girls race was also packed with an array of talented unattached individuals but it didn't deter Kendall Nelson from Marist as she won leading the Lady War Eagles to yet another LS team title with the top Girls Performance of the day in 12:25 Teamate Morgan Geurts ran a strong 8th clocking a 13:13 with a flock of runners finishing in spots 17-20 to cement their victory with 38 points.  Alyssa Hooker made the trip over from the Augusta area and running unattached (Stallings MS) ran a strong 2nd finishing in 12:32  Mackenzie Ellison from Gwinnett County ran as an Individual placing 3rd in 12:50 followed by a pair of Durham Hoyas who sparked their school to a 3rd place team finish including Kira Stanley in 4th at 12:55 and Mattie Roundtree in 5th at 12:57  Woodland Euharlee took home a huge runnerup team trophy totalling 80 points led by Lindsay Scifers in 11th and 6th grader Baylee Evans in 13th. 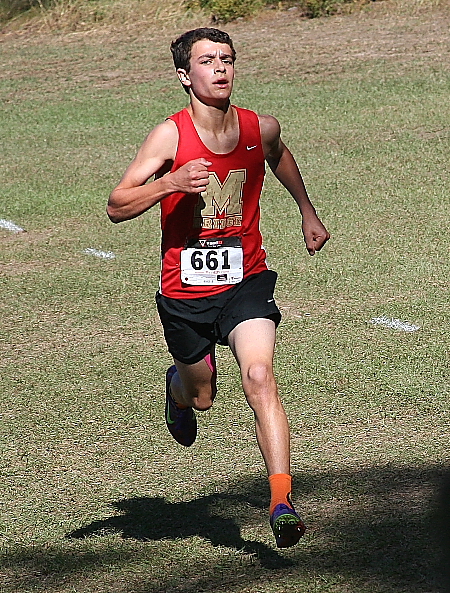 Next up was the Small School Boys race and Malcom Brdge's Anthony Potts continued his unbeaten season taking the title for the Lightning (a North Oconee feeder school) clocking the 2nd best Boys time of the day in 11:13  Ben Davies led the way for Holy Innocents Team Title as he was runnerup overall about 20 meters behind Potts in 11:18  Frank Crippen-Ginsburg (Holy Spirit Prep) had raced in many unreported private school races this Fall including a couple of shorter courses but handled the tougher, longer Bleckley Course very well placing 3rd in 11:21  Clay Milford ran unattached placing 4th overall in 11:44 and St. John Catholic's Matthew Baun finished 5th in 11:48  Pace Academy gave Holy Innocent's a fight for the team title placing 2nd with 78 points spurred by the 8th place overall Jack Douglass in 12:00  Pack running was the key for 3rd place Cartersville MS as they took 3 team spots in the top 18 led by 7th grader Jonathan Holloway. 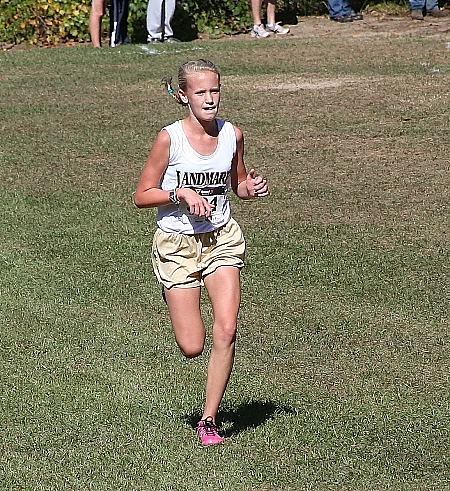 She has competed mainly in 5K races this Fall, but Landmark Christian's 7th grade star Sarah Foreman showed she can race well at 2 Miles as well as her strength paid off taking the Small School Girls State title in 12:40  If anyone left it all out on the trail today it was Audrey Honiotes of Hart MS as she gave Foreman a challenge from start to finish placing 2nd overall in 12:50  Emma Rose Bagwell of Holy Redeemer placed 3rd overall in 12:56  Renfroe MS from Decatur put it all together as a team when it mattered capturing the Team Title scoring 69 points with 2 runners in the top 10 spots overall including Whitney Westbrook in 5th place clocking a 12:59 with teamate Maggie Carlton a few meters back in 6th at 13:06  Elizabeth Graves was the top finisher for Holy Innocents in their runnerup team finish placing 4th in 12:59  Taking their position on the Tractor-Trailer Podium was a surprising run by Hebron Christian led by Miranda Taylor. 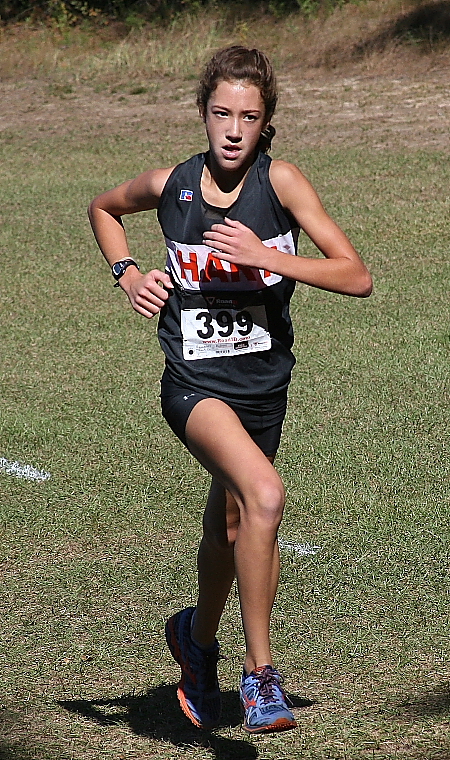 After the fun and crowd pleasing Elementary 1 Mile in the largest race of the day were the MS JV  Boys and Holy Innocents dominated the field placing 5 runners in the top 10 led by overall champ 6th grader Scott Brumbeloe with a strong race in 12:32 and Kyle Jones Shah placing 3rd in 12:40 Hounding Brumbeloe was Pace's Alex Ross  led his JV squad to a 2nd place team finish along with his runnerup individual effort in 12:34 Woodland Euharlee finished 3rd with 2 runners in the top 5 including Jacob Giltz (4th) and Levi Roland (5th) The JV Girls race was competitive also as Ashly Aenchbacher of George Walton Academy racing to a big trophy in 14:16 with a pair of Oak Hill MS runners close behind including Ashly Aenchbacher in 14:20 and Makayla Butts in 14:25 sparking the Baldwin County school to a 2nd place team position. Holy Innocents ran away with the JV team title having 4 runners in spots 5-9 scoring 29 points led by teamates Margaret Wilkins 14:28 and Megan Roddenberry in 14:30  Woodland Euharlee took home the 3rd place hardware and placing 4th overall was Sydni Wilson of Renfroe MS in 14:26