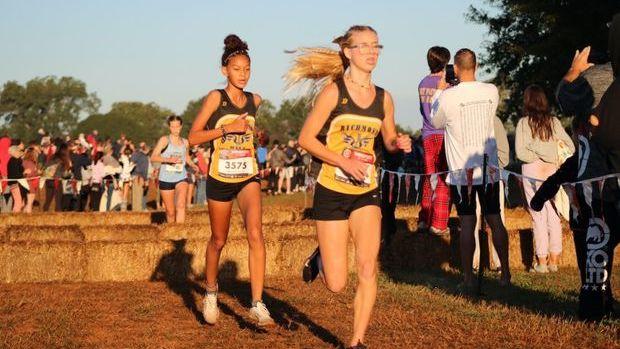 Obviously, this past week has been difficult for many people, especially those living in Florida or the Carolinas. Canceled cross-country races are the least of anyone's concern when natural disasters hit. Hopefully Georgians can remain thankful that the worst of Hurricane Ian completely bypassed the state. We should be glad to help out our neighbors in our bordering states because we're really all on the same team as Americans, and more importantly, as humans. This week at Unsung Heroes, we will be honoring teams rather than individuals. It's a unique week, as many teams did not race (except those at Alexander/Asics and a few others). The focus is on teams that have overachieved from where they were ranked coming into the season. Many of these teams have benefitted from adding some star freshmen athletes, but even more have just used internal improvements and good training to jump up in the rankings. Teams were listed based off of their most recent performance, and not all of them competed this past week. These programs are all laying a great foundation for the future, and it would not be surprising to see many of them earn region titles or podium finishes at the state meet!

While Richmond Hill's boys XC team was riding high as 6A state champions last season, the lady Wildcats finished in 10th place, and their top runner for most of the season graduated. When the reclassification bumped Richmond Hill up to 7A, dreams of a podium finish in 2022 must have seemed unlikely. However, these girls have improved across the board this season to put themselves firmly into the mix for a top-5 7A spot. They dominated the 5A-7A race at Asics last weekend. Junior Julia Wilson leads the way for the Wildcats in 2022, throwing down at 19:24 for the win on Saturday. She has been closely followed by a pair of quick freshmen in Jolee Mitchell and Iris Turner to give Richmond Hill a trio of runners who are capable of sub-20:00 performances. The team's 20:01 1-5 average at Asics would have ranked 11th in the Championship race, right near 7A rivals North Gwinnett, Parkview, and Lambert, but they had a much tighter 1-5 split than any of those teams, which could be crucial in a packed meet like the 7A championships. The best news yet for Richmond Hill is that their whole top seven returns next year.

Cambridge girls won three straight 6A state titles from 2017 to 2019. However, last year's heartbreaking two-point loss to North Atlanta was made even more painful by the fact that four of the team's top five (and five of the top seven) were seniors. This season, Cambridge's runners behind holdover Anna Filipek have really stepped up their game. Sophomore Lauren Tindle broke 20:00 for the first time last Saturday and has been impressive all season long. Logan Huddle, Sanam Rangaraj, Emily Tebeau, and Ava Hosfield all smashed their season bests at Asics. Usually fast team turnarounds, especially on the girls' side, come from an influx of speedy freshmen, but Cambridge does not feature any 9th graders in their top six. Now, based on season best times, they rank third in 5A, and they are primed for their seventh straight podium finish. If so, this one might be their most hard-earned top-4 finish yet.

Columbus girls had only run in four races this season before Alexander/Asics on Saturday: Carrollton Orthopaedic Invitational, and Muscogee County School District Meets 1, 2, and 3. I wanted to start with that because it shows that these girls did not have a chance to run a really fast race until this weekend. The whole top five ran lifetime best 5Ks for a team average of 20:53, which proved they belonged in the Championship race. Columbus might not be able to catch Wesleyan for first in 3A, but they could make it interesting for sure. Freshman Gabby Ware is having an incredible season for the Blue Devils, winning two of her first three races this season, and she is the lone 3A girl to break the 20:00 barrier this year. Sophomore Haley Heard is right behind Ware, and they are very solid at runners 3 and 4 at around 21:00. Could Columbus shock everyone and win their first state title since 2010 in November?

Chattahoochee graduated four of their top six from an eighth-place finish at the 6A state meet last year. In terms of returning talent, the Cougars ranked way back in 18th entering 2022, even as they dropped down to 5A, because they only returned two runners with a PR under 18:50. This year, an 18:50 would not even get you into the top 10 of this team. Senior Diego Santiago has evolved from a very good runner to one of the best in Georgia, and teammate Chris Connolly has leveled up as well. The real story, however, is with the back half of the top five, which has pushed Chattahoochee into podium territory in 5A. Jerry McGaw has been one of the fastest freshman boys in the state this year. Elliott Howe and Alex Johnson both ran faster than 17:12 at Asics after neither of them broke 19:00 before 2022. Oh, and they also beat Chapel Hill and McIntosh, two teams ranked ahead of them in the 5A standings. This is a team on the rise.

How could Pace be an overachieving team if they won a state championship last year? Here's how: they graduated six of their top seven, including their whole top five, then they moved up from 2A to 4A, and their top runner took a while to pick up where he left off last year. This is a completely different Pace squad from the Blaha-led teams of the past four years, but they have improved a lot from the beginning of the season. Two freshmen, Illiyan Hajiani and Ford Jordan, have made their mark early with the Knights as they already find themselves in the top five. Sophomore Benjamin Ganz and junior Brody Matthias have already bested their PRs from last year by over a minute. Finally, Matthew Wells, the one returning runner for Pace from the 2022 championship squad, is now back in full force with a 16:32 at Asics, and he should be in the hunt for the top 10 at 4A state this year.

The 1A-DI team battle is growing more interesting by the week, especially between Paideia and Whitefield up front. Looking down the field a little bit, one can see an interesting mix of schools that previously were all in different classifications now battling each other. Armuchee, Darlington, Athens Christian, and Bleckley County will be jockeying for the final two podium spots in 1A-DI. The fact that Athens Christian is in this position right now is a testament to their team's depth improvements since last season. Senior Nathan Smith has broken 15:50 three times already this season, and he has a solid squad backing him up this year. Zack Rivera and Jacob Cereneche have taken huge strides since last season, and they're joined in the top five by freshmen Johann Brink and Zack Akins. While rival Athens Academy edged past Athens Christian at the Clarke/Oconee Championships, that's no disappointment since the Spartans are ranked #1 in 2A.