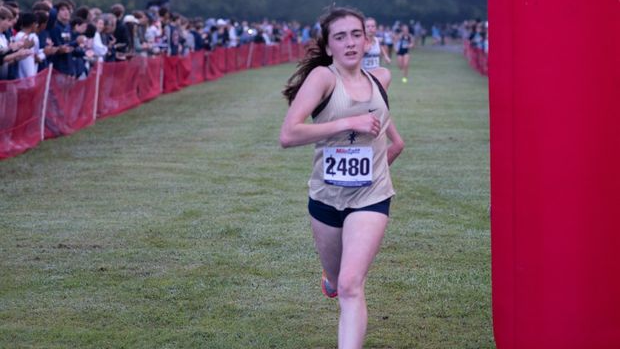 Jessica Sheehan has been a consistent front runner for St. Pius X so far this year.

Have you ever wondered how good runners look so relaxed running times that are way beyond your capabilities? It almost seems like these athletes just have some innate ability to move at a more rapid clip than the average person, and they were just born being able to run fast. While certainly there are inherent differences in speeds between people, a much higher proportion of speed differences come from practice, practice, practice. The runners below are examples of this idea. This week, we're honoring juniors at Unsung Heroes, and all of these runners are one of the fastest 25 or so runners in their respective classifications. However, none of these runners naturally ran this fast from the moment they started competing. Instead, they have steadily worked hard and improved year after year to help their team and become the fastest version of themselves that they could be. These athletes are seeing their efforts pay off this year, and all of them have at least one more year to improve even further!

At the 5A girls state meet last year, St. Pius finished with four of the top seven runners in the race, and all of those girls could return for another season. Unfortunately, things haven't gone to plan for the Golden Lions, as runners Grace Von Biberstein and Margot Humphrey have not run since track season. Through all of the hardship, St. Pius still finds itself ranked 4th in all classifications, and they finished 5th among Georgia schools at the Wingfoot Classic on Saturday without low stick Hannah Schemmel. A major reason for that has been the impressive running of Sheehan. In each of her three races this season, she bested her PR from last season (when she also finished 7th at state). She owns the 10th fastest PR in 6A this year, and now she is beginning to learn how to be a front runner for St. Pius. If the team gets back to full strength by the end of the season, then St. Pius could contend with Harrison and Marietta for the top girls' team in Georgia.

Where is the love for our South Georgia runners? They always seem to fly under the radar since many of these teams compete at smaller meets throughout the season. That means runners like Abbie Brown, one of the top runners in South Georgia this year, go overlooked. In fact, Brown owns 17 top five finishes in cross country races dating back to her freshman year, including 6 out of 7 this year. The issue is that Fitzgerald High mostly races in smaller meets, so Brown does not get as many opportunities to go against Georgia's top runners. However, she has continued to make the most of her opportunities, running a PR of 20:34 earlier in the season. At the TA Panther Prowl in Tift County this weekend, Brown finished fourth in a field of 68 runners and was the top runner on her own team by six minutes. It would be no surprise to see her mix it up with some of the best in 2A at state, and a top 15 finish looks very possible!

Sophia Cook was the top public school finisher at the 2A girls state meet last year, finishing just under 20:00. This year, she has been even better, running under 20:00 in all four races, including a 19:56 at Carrollton Orthopaedic a few weeks ago. At the Darlington XC Festival this weekend, fans were treated to a sneak preview of the 1A-DI individual race, as Cook squared off against Armuchee's power duo of Shelby Green and Marissa Kimple. She more than held her own in a third-place finish, receiving a new PR for her efforts. It's important to point out that Cook was over a minute ahead of the fourth place runner and less than 30 seconds off of the leader (Green), so this really was a three-girl race. Her running career has already been full of impressive accomplishments, but it would be incredible to see her add a state championship to her resume.

Last season, the main story about Denmark was Ethan Ashley's undefeated regular season, but the rest of the team was quite good as well, as proven by the Danes' third-place finish at the 7A state meet. Despite losing its top three guys to graduation from that squad, Denmark is fielding a very good team once again, led by Ethan Bridge and Sydell. Last season, Sydell did not break 17:30 until after the state meet despite running on some quick courses. He put in some work during track season and now is a top-15 contender for 7A in a very deep field. Now the 16:00 barrier is within his sights. At the Apple Hawkins Invitational, which featured 23 teams and 162 runners in the Varsity Boys' race, Sydell finished second, only behind teammate Bridge, and helped lead Denmark to a convincing victory.

The Hall County Championships was an interesting meet, with plenty of underrated teams from different classifications such as Chestatee, North Hall, and Flowery Branch facing off against each other. Gainesville ended up grabbing the victory on the boys' side, and Proffitt was a major reason why. The junior for the Red Elephants (great team name) ran a personal best of 16:21, 27 seconds faster than he ran at Warpath. This is a huge jump from how fast he was running last season, when his PR was 17:54 at Asics. Proffitt has stepped up into a much larger role for Gainesville this year after being their number 6 or 7 last season. With teammate John Jessup to push him, I would not be surprised if Proffitt finishes in the top two at his region meet and top 20 at state.

Chattahoochee County High School (ChattCo for short) is not a team that gets too much press here on MileSplit, but Donald Short deserves a shout-out. His junior year marks his first cross country campaign, although Short did compete quite well in track this past spring, posting a sixth-place finish at the 1A Public state meet in the 3200. His first-ever XC race, on September 17, was a victory (18:42 at the 3-mile Marion County Invitational). How many runners can say that? Three days later, he proved that it was not a fluke by finishing third in his first 5K race. Short is easily the fastest runner for Chattahoochee County this season, and he should be a dark horse contender for a top 5 spot at state.