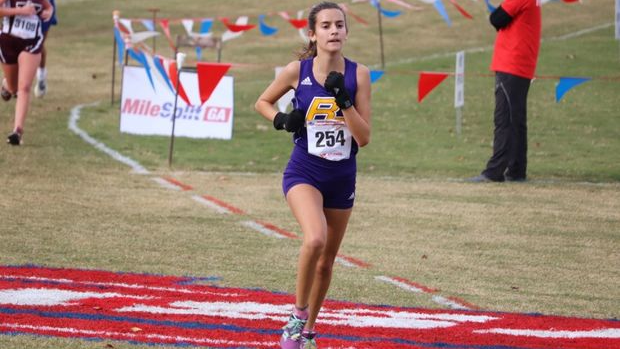 It's hard to believe, but six weeks have already come and gone for the 2022 cross country season. A chill is in the air in the mornings now-although it's mostly gone by the afternoon. Now that virtually every team has raced at least once, and most have raced at least two or three times, the individual and team battles are beginning to take focus. As the team battles begin to heat up, we must remember how important the runners in the fourth and fifth slots can be. Think about it-if the number 1 runner on your team runs faster or slower than expected, that might affect the overall team score by a couple of points. However, if your number 5 runner runs faster or slower than expected, especially in a large meet, that could change the team score by a huge amount. Let's take the Carrollton Orthopaedic Invitational as an example. A top runner who would have run 16:40 in the boys' race but had a tough day and ended up running 17:00 would only increase his team's score by six points. However, a fifth runner who is running around 19:00 would have increased his team's score by 24 points if he ran 20 seconds slower. This week's Unsung Heroes include runners who have been the fourth or fifth runner for their team for most of the season. These runners will get little of the glory, but they are arguably even more important for the success of the team than the top guys.

The 9th Milton XC Invitational shaped up to be a battle between the Blessed Trinity Titans and the South Forsyth War Eagles, 6A against 7A, two teams that will be contending for one of the top spots in their respective classifications in November. The conditions were wet, the course was soft, and the terrain was hilly. Ultimately, Blessed Trinity won by 24 points, but South Forsyth beat BT at the #5 slot. The War Eagles' fifth runner, junior Molly Hanlon, bested her BT counterpart by 35 seconds. Hanlon owns a season best of 20:47 at the North Georgia Championships (still not a cakewalk of a course). She is part of a tight 3-5 pack that finished within 13 seconds at Milton and will be key for sticking with some of the top teams in the state.

Before the Big Peach Mustang Stampede, Wesleyan had flown way under the radar this season, with their only race coming at a relatively small meet on their tough home course. However, Wesleyan flexed their depth at this weekend's race in Acworth. Against competition that was almost entirely schools in 4A or higher, Wesleyan finished second overall, and they had, by far, the best #6 and #7 runners of any of the 18 schools that competed. Senior Ella Richards finished fourth for the Wolves, and their 3-6 pack finished within 6 seconds of one another. Richards is perhaps the most surprising runner in this group, as she did not run XC at all during the past two seasons, and she was a 30-minute 5k runner as a freshman in 2019. Now she has run 21:26 and is a major contributor for Wesleyan, who are the heavy favorites to win 3A this year.

Bowen is not a new face in Georgia XC. As a freshman in 2020, she finished fifth overall at the 2A state meet and also finished fifth in the 3200 during track season this past spring. This season, she slots in at about the fourth or fifth runner for a very strong Bleckley County squad. The Royals boast senior Tristen Crosby and freshman Ella Gibbs at the front, along with contributors Lily Farrell, Ellen Arnold, and Kayslen Armstrong. Running in the incredibly competitive Championship race at Carrollton Ortho, Bowen came up big with a 23:04 in her second 5k of 2022, helping Bleckley County finish 12th despite missing Gibbs and Farrell. Hopefully Bowen will get a chance to run a faster course in the near future to improve her season PR, but either way she will help BC cement themselves as favorites in 1A-DI.

Pope has been a very difficult team this year to track. At their first race, the Hoya 2-Mile, they were missing contributor Dermot Maloney. At their second race, the Kosh Klassic, top runners Davis Drake and Carter Spohn did not run. Benny Brenneman, William Wright, and Paxton O'Shaughness missed Pope's third race at Bob Blastow. Spohn did not run this past weekend at Carrollton Ortho, and Pope elected to run in the Large School race instead of the Championship race. Despite the constant shuffling of the team, Pope has continually performed well thanks to their superior depth. Senior William Wright is a major reason for this depth. He has improved every season that he has run, and he nearly matched his state meet time from 2021 with his 17:59 time at Ortho this year. Pope was ranked fourth in 6A in the first team rankings of the season, but I believe they can skyrocket to first or second when their whole team runs together. Wright could be the fifth runner that clinches the title in November.

Westminster had a great season last year, scoring only 19 points in the 3A state meet. However, this season they faced some questions, as they graduated four of their top five from last year's state team, including record-setting runner Matthew Fernando. The Wildcats have responded by winning each of their first three races so far, at the Kosh Klassic, Starr's Mill AT&T Panther Meet, and now Carrollton Orthopaedic, all against very strong competition. One major reason why has been the resurgence of senior Chase Hunsicker, who has been Westminster's fifth runner at each of the above meets. Last season, Hunsicker owned a season best of 17:49 at Coach Wood, but this year he's already running that fast at Carrollton in September, so he should be a candidate to improve dramatically as the season progresses.

Whatever Coach McCauley has done to maximize her Paideia squad's training this season, it has definitely worked. All of Paideia's runners have massively improved from their XC times from last season, and their 1-4 runners are so close that I could have chosen any one to honor as an Unsung Hero this week. However, Ben Walton-Scott owns the fourth-best PR for the Pythons this season, and he has improved the most since last season. For context, Walton-Scott ran 20:11 at the Starr's Mill meet in 2021; this year, he ran nearly three minutes better at 17:13 and beat last season's PR by nearly a minute at the very tough Milton Invitational. Although 1A-DI rival Whitefield is ranked #10 in all classifications, Paideia's very tight pack running could make them the favorites by the end of the season. The improvement of the Walton-Scott brothers, both Ben and Matt, are a huge reason why.