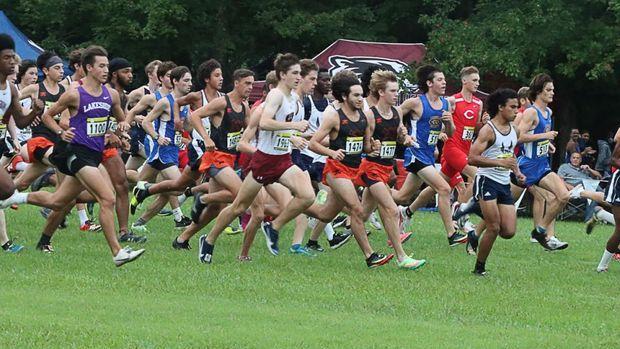 The start of the Bob Blastow race last year. Photo by Marc Logan

As a cross country coach, I'm starting to learn that you can't fool your athletes when it's workout day. Like animals, I think our youth can smell it on you when you walk past them in the hallways.

"Okay, coach, let's have it! What are we doing today?"

This, already, and you haven't even had your coffee.

Coaches have known to get creative with their workouts - one team lets each coach pick the workout each week. Some go online. Others email others to find out what they do. I know of one who even refers to it as "speed play" instead of "speed work."

Regardless of the verdict, cross country athletes seem to approach the oval differently on this day than others. First, they walk in packs, not alone, as if the news of the day's pain can be shared when their teammates are with them.

It's funny to watch when it is delivered to the stretching circle - as it then resembles a huddle except with 12 people talking instead of one. "We're doing WHAT?" "Oh, we've got this!" "I can't do that today; I had three hot dogs for lunch!"

With the pre-talk out of the way, there's that long, slow walk to the starting line - when doing the first of 10 quarters, or the up-and-down hill work. Let's not forget the fun of mile repeats, and the perhaps the tempo runs.

"It's just like anything else, in that it's that FIRST step that's the hardest," one athlete said. "Once you get out of the box and start your sprints or your quarters, hopefully your athleticism and/or your competitiveness takes over and you've got to finish."

Another viewed it this way:

"It's a pain and gain thing twice for me. The pain of hearing the workout, the gain of doing it, the pain while you're doing it, and then the gain again when it's over. Maybe I overthink things, but it's a psychological win for me when I get to take off the spikes and go for my cool down."

Looked at that way, perhaps there's a touch of Zen in this sport we keep returning to. And, unlike many sports where there's a lot of standing around at practices, the angst of the athletes can be resolved simply by firing the gun - getting the whole thing started.

For there is a point in each workout - maybe different for each runner - where reaching the end gets pushed aside, and where mind, body, and spirit resort to every fiber of athleticism and perseverance they own as they knock it out - one at a time.

"I used to put a rock at the top of the hill for every one I had to do," a current coach said. "After I'd run one, I'd remove the rock. One day my teammates came up and put two of the rocks back when I thought I was finished. That's funny now. At the time, though, not so much.

Like a mosaic, though, when things come together in any and every sport, or even in art form, it's a beauty to watch. That point where endurance meets speed, pain becomes expected therefore overcome, the fast twitch muscles join the party at just THAT moment.

And love the workouts or hate them, those moments don't happen except for those days - you know those days - when your coach smiles from over his or her clipboard and delivers the day's verdict...