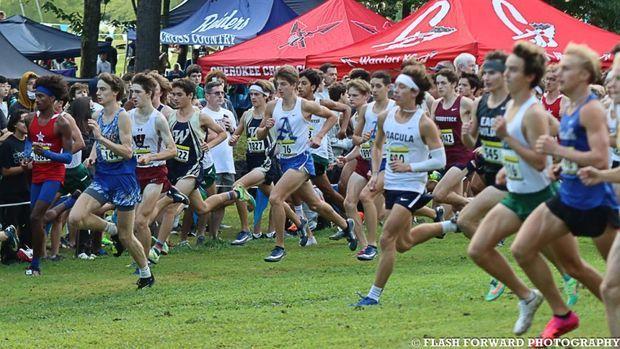 The Mindset of the Runner

Why do we do this?

Why do we wake up at dark thirty on a Saturday? Draw the short straw and have to lug that heavy tent to the bus. End up on the lumpy seat on that van - making sleep impossible; then more carrying, getting your hands pinched when elevating the dang tent.

Standing in a long line for the porta johns, said porta johns that wake you quicker than coffee. Warm up while mattress marks are still on your face. Run through mud and slush and hills and grass and gravel and ruts and roots - run until you puke or pass out or both?

Why do we do this?  My favorite answer came from a former high school and collegiate cross country runner. She thought about it for a long time, looked at the sky, and finally said, "I don't know.

Anyway, I admire you all - because you're perhaps crazy but in an appropriate way - because it's the hard that makes it great. Because sometimes you'll get spiked three times before the cock crows eight. Because often people get sick during and after a race, and eggs never really smelled all that great the first time.

Because it will hurt - if you do it right - and because in appreciation to the math classes you attend - you will walk around with numbers inside your head; the splits your coach calls out after each mile have become sacred. And, not to be sacrilegious, but time, distance, and pace are your Holy Trinity, and whether you'll admit it to the Heavens or not, those three words are capitalized just as large as Father, Son, and Holy Spirit.

Forgive me father, for we have sinned. And as I've already said, maybe there's something wrong with us.

Still, there is something - something unheard, unable to voice in mere words - that drives us forward. I had a runner once - she loved training and her friends - but hated the races so much that she wrote, in pen on her hands while at the starting line, "You Won't Die!" There would've been more exclamation points afterwards, but her arms were only so long.

Regardless, a race is sacred - and it requires something that goes to the end of who you are, both physically and mentally. It's great to be a part of a sport that asks of you so much, though understood so little by those Muggles who've never spent a 7:00 a.m. morning with a bib number pinned onto their stomach.

It's a fraternity and a sorority, but instead of dues and pledge pins we have a sport where the last guy gets just as much applause as the first. Where you can finish 54th out of 70 but if the time on your watch is a PR, you jump for joy.

I was told once - by my boss no less - that distance runners think they know everything. "No," I corrected, "it's just that we know different things, and we know them at deeper levels."

He rolled his eyes, fortunately he didn't fire me. Or, maybe he did, I'll find out when I get home.

Moving forward, once upon a time, I had two alumni return to my school, - just to to say hello. Funny thing was, they never once spoke about being on the only state champ cross country team we've ever had, nor anything about those 17 steps in Carrollton known as Separation Slope, and you can believe those two words are capitalized.

Instead, it was the time a girl stopped to pull her teammate out of a tree where she would finish the race. Stepping on a snake at the river because she thought it was a stick. The bus breaking down somewhere between Atlanta and Macon, and I the coach having to practically stuff those 80-pound bodies in the consoles and glove compartments to get us to the race on time. Thank God runners are small, yes?

I envy competing runners in many ways, pity you in others, yet of all the sports I attempted when growing up, it is distance running that I flaunt like a muscle, wear like an Olympic Medal, and it often reminds me that I'll always be just a little bit tougher than I ever thought I could be.

Because once upon a time you had the training run of your life but forgot to start your watch. Had to finish a trail run after losing a shoe. Fell flat on your face - in front of your coaches and your peers. Had an injury that even a certified trainer couldn't diagnose. Cussed at a blaring alarm clock at 5 a.m. Learned to like ice baths - or maybe you never will. Started out too fast in a race and lived to regret it. Lost the chip in your shoe. Looked for your name afterwards on Milesplit. Raced your teammate at practice when perhaps you weren't supposed to, and maybe sat in the woods when you knew you weren't.

You can recall times from all your races yet be in the shower and not remember if you've washed your hair. Wrote your race goals inside your locker, on your bathroom mirror and even on the back side of your hand. You've trained your mothers of when to approach after a race or when to just unlock the car door and stay quiet.

It's what we do. It's who we are. And when the last finish line is crossed and the starting guns put away, there's one sentence that follows me when I think about the distance runner, and it is this:

Never underestimate this sport... that can oh so often bring tears to your eyes.