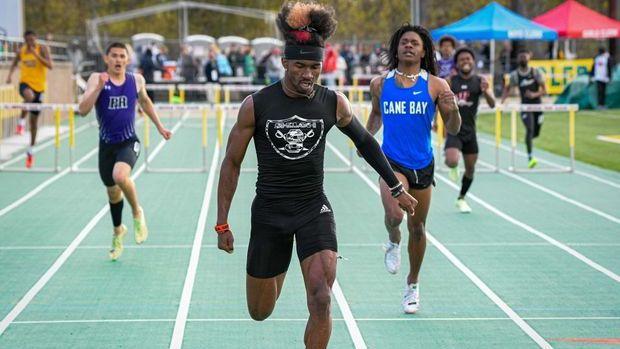 Christion Barker was also an amazing hurdler, just missing the top 10 all time in the 300m hurdles. Photo by Dan McLaughlin.

Christion Barker, the graduated senior from Shiloh, is one of the four finalists in the vote for the best performance from the 2022 Georgia Outdoor Track and Field Season. We will be running a piece today on each athlete detailing why you should vote for them. Here is the case to be made for Barker.

Let's start with the obvious and the fact that his Long Jump of 25-3 from the Christian Coleman Invitational is the 3rd best jump in state history. That alone is one of the greatest accomplishments from this season.But he makes two very compelling cases beyond that.

First of all, he has put himself in elite company. There are only two names ahead of Barker's on the all time list in Georgia as he became just the 3rd boy ever to go beyond 25 feet without an illegal wind reading. One of those names is Christian Taylor. Taylor is not only one of the best horizontal jumpers in Georgia history, he could certainly make a case for being the best track and field athlete Georgia has ever seen. Not only does he have two Olympic Gold medals and two World Championship golds, he is still competing professionally 14 years after graduating high school. And he has been one of the best in the world for over a decade now, winning his first Gold medal in 2011. That is simply remarkable. So any athlete that can even be mentioned in the same sentence as Taylor has clearly done something special. So the fact that he's being compared to one of the all time greats of our sport could be enough to give him the vote.

But he also was an incredible team oriented athlete this track and field season. Shiloh won an incredibly tight 6A team battle this year, winning it by a score of 73-71 over a very talented Carrollton squad. Barker qualified for state in four events and ranked highly in all four of them, so he was clearly a huge part of Shiloh's plan of attack. Unfortunately, as you can tell from his profile, things did not go according to plan. He was only 3rd in the long jump and then was a DNF in the 200m prelims. Something was clearly wrong. Then after being the top seed from the 300m hurdles prelims, he only managed to finish 7th in the finals. But I think it's that result that shows the kind of athlete that he is and how much his team means to him. With something clearly not going to plan, he still stepped up and scored what he could for his team in the 300m hurdles final. 2 points, the exact margin of victory they would ultimately have. That's the kind of stuff that will melt any coach's heart. A kid stepping up and doing everything he physically can for the team. Sometimes superstar athletes, which Barker absolutely is given his season results, show up and have everything go right at state. But sometimes things go wrong. And when they go wrong and you still see an athlete fight for their team, that shows everybody that they're even better than their results on the track. Or in this case, the runway.