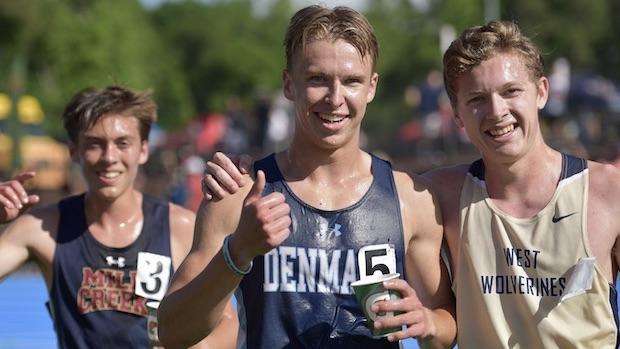 A Day and Night in the Life at a Track Meet

Late night. The track meet finally over. The weather - cold, then hot, then cold again. Trying to assimilate all the pictures, events, thoughts, and races that just went on - attempting to take 10 hours and reduce it to eight or nine paragraphs.

Snapshots of the day all vie for attention, each boxing the other out.

The boundless energy at the start of the race, picking up collapsed runners at the end. Hitting the "start" button on your watch, hopefully remembering to hit "stop" later. Showing one girl her previous splits while, timing another, while also looking for your third relay leg runner. Wondering why you left your rain jacket in the van.

And don't forget the art of fielding all those questions. "Are these spikes the right size?" "Can I hand off to Joey instead of Don?" "Would you mind if a scratched out of the 800?" "Who drank up all the Gatorade?" "What's my PR in the high jump?"

It's interesting that doctors prescribe medicine for attention deficit disorder while, at the same time, we live, coach, and compete in a world that simply demands we have it. Doing one thing at a time? Are you kidding? And why take a medicine to stop the mental hyperactivity we need to have in order to exist during the confines of a meet?

When you coach any sport, you multi-task. Still, it could be suggested that - with the diversity and different events that go on at a track meet - coaches must multi-task times twelve. And props to the head men and women for knowing something about all of it - running, jumping, throwing, vaulting, hurdling, relays, and running short and long distances.

"I'm still trying to figure out what all the lines on the track are for," an assistant coach said in laughter. "I remember the first day when my second leg of the relay asked me where she was supposed to stand to take the hand-off. It was a road map to me, spaghetti even. And, for the record, I told her wrong."

And coaches do more than coach - perhaps you've overseen the pole vault that lasted all day? Tried to rally the hurdle crew together to move them on and off the track even though the meet was approaching its 10th hour? Raked sand, got called into help solve a dispute, measured jumpers, made sure the hand-offs were made at the right time before getting the dreaded red flag?

All this while coaching, counseling, goading, begging, timing, pleading, searching for athletes, appeasing a parent, and wondering if you have enough athletes left at the meet to take down the tent.

Hopefully, you do it because you love it. Still, it's a comparison to think about, when coaches in other sports are asked what must happen for them to win the game, they have that one game, that takes place right before their very eyes. If you ask a track coach that, you'll have to stand back while his or her brain fires off sparks, as the answer is perhaps similar to a radio station that doesn't quite come in. Words start out, negate themselves, begin again, offset each other, and finally - syllables fly out too fast for reporters to make sense of most of them.

Still, at the end of the day, when the shouts at the 4 X 400-relay are finally over, the results are printed off for the coaches, medals already distributed, and the PA and race officials are packing it all up, it's not X's and O's and films the coaches are looking forward to.

No, just a bed - or perhaps a couch will do. Because there are hours of sleep needed for the body, perhaps even more so for the mind. And don't wake us up until Monday, maybe not even then...