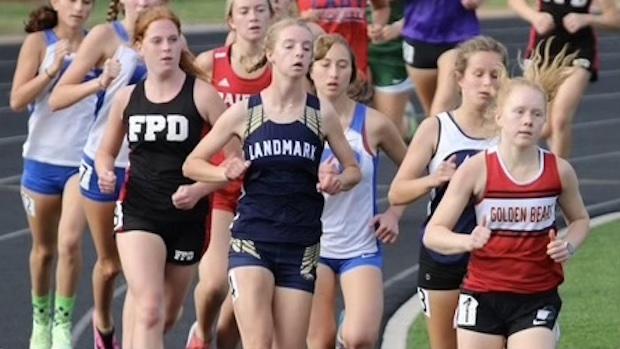 The Patience, Persistence, and Pains of the 3200-Meter Run

A lot of track meet events are a gun, some dust, and clouds of smoke. The firing pistol, screaming on-lookers, and the results online are in some cases almost immediate.

Then the dust settles in, and the 3,200-meter run begins. Coaches begin to recalculate when they'll get home based on how many heats there are, while ones without an entrant hope the Hospitality Rooms are still open. And is there any chance we can combine some of these heats? The answer to that latter question can save a good half-hour on after-track-life preparations - maybe more.

How do the racers feel about this - the grind, the game plan, the mental and physical effort? And how hard is it to focus on all eight laps without at some point wondering what your evening plans are, or if there's another rerun of The Big Bang Theory on later?

Last year's state champion Joe Sapone views it this way: "I would say the 3200 is - to a certain extent - the epitome of high school track. It's usually a race that occurs later in the day, the heats are filled with talent from among the best, coupled with some runners who may just be starting out, and the race hurts! Still, it hurts in a slow, burning way. As for concentrating over all eight of those laps, that's nothing short of rocket science and... I still can't figure it out."

Former two-mile runner William Vaughan remembers it like this:

"There was rarely an ornerier feeling than standing at the starting line before that race. Think about it - if you don't run until you almost pass out then perhaps you didn't run well enough. Still, the sense of accomplishment and how hard it was are perhaps two major reasons that keep kids toeing that line, day after day, race after race."

And when they do settle across the lanes, perhaps it's fitting that the meet is slowed, as the entrants' preparations have taken longer, with a lot of it perhaps as lonely as the race itself. Does this lead to good habits off as well as on the track?

"I'm quite sure it does," former collegiate coach Phil Wendel said. "A lot of true distance runners - maybe even most of them - develop this stubborn, persistent, mindset that helps transfer over. A task that takes longer isn't so daunting because they're used to that. Plus, they know how to reduce their goals down to bite-sized chunks - slowly but surely over time."

Maybe it's a bit of everything - the presence of all feelings - a death march in the heat; a patient, strategy-filled race, rhythmic perfection on a good day, a cross between great endurance with a tinge of a sprint - if not a lot. It can be solitary, yet sometimes crowded, with a mix of team play along with feeling the pains of being alone.

Still, great things are achieved over time, life is a marathon not a sprint, or maybe 'no pain no gain' is the best way to look at it.  If that is the case, then there's perhaps no other athlete that walks off those tracks with more gain - physically and mentally - than the 3,200-meter runner.