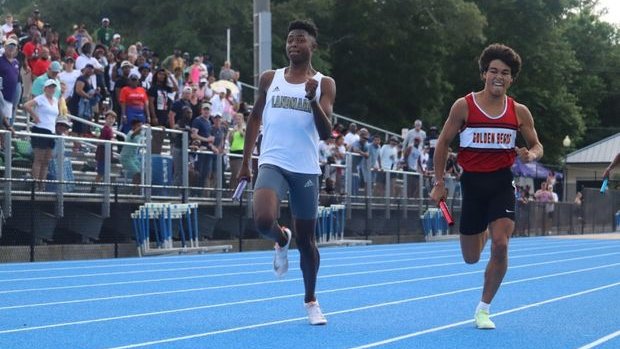 Holy Innocents holds off Landmark Christian in the 4x400m relay to secure the team title.

Landmark Christian Girls won with a decent margin of victory over the weekend. But they definitely needed to take care of business down the stretch. They didn't do much in the field events but they did get 8 points from state runner up Shari Brown on day two so they weren't completely blanked going into day 3. Their 4x800m relay also won for 10 of their points. But they needed their sprint stars to show up and that is exactly what happened. Nina Story kicked off their day by placing 6th in the 100m hurdles and would later go on to take 3rd in the final. Then Taylor Gullatte and Malia Campbell got to work with Gullatte taking the win in the 100 and 200 and Campbell getting the win in the 400 and finishing runner up in the 200 for a large chunk of their points. Their sprint relays won all 3 showing their depth was just too much to handle and Brown picked up 8 more points in the 800.

Wesleyan battled with Hebron for the runner up spot and the wolves took the 3nd place trophy. Wesleyan got a good chunk of their points in the field thanks to Imani Washington winning both throws, Nea Sanders and Sade Ojanuga placing 2nd and 4th in the triple jump, Danielle Kelly taking 3rd in the pole vault, and Ojanuga placing 6th in the high jump. They were runner up in the 4x800 and scored a couple of points in the 1600 and 3200 so they had a big lead over Landmark going into day 3. They did well with Ojanuga and Sanders going 1-2 in the 100 hurdles and Sanders placing 4th in the 300 hurdles. Anne McSweeney added some points in the 800 and it was enough to hold off Hebron for 2nd.

Hebron put up a good fight but would have to settle for 3rd overall. They also did well int he field with Libby Jackson winning the pole vault, Georgia Piper taking runner up in the high jump, Malia Melton placing 3rd in the triple jump, and Kayla Lane scoring in both throws. The rest of their points mostly came from relays showing a true team effort as their 4x800 was 6th, 4x100 was 2nd, and 4x200 was 4th. Brooke Browning got the win in the 3200 but they would ultimately come up a little short of taking down Wesleyan.

Atlanta International was able to get the final trophy thanks mostly to Cara Joyce who got wins in both the 1600 and 800. But their 4x400 relay finished 2nd and they also got points from Hanna Johnson and Pauline Mathiot.

Performer of the meet - Just want to give one more opportunity to shout out Cara Joyce as her high school career comes to a close. She has been consistently fast for four years of high school and finishes with 7 individual state titles and 2 runner up finishes. That's a remarkable career and she didn't disappoint in her final meet either with times of 5:10 and 2:12.

Five points separated the top four teams and this thing came down to the 4x400m relay to determine who won. It doesn't get any better than that folks! The standings going into the final event were: Whitefield - 64, Holy Innocents' and Athens Academy tied at 58, and Lanmarck Christian at 55. Since Whitefield didn't have a relay team in the final as they had missed it by 0.91 seconds, any of those four teams could win it.

Holy Innocents' won the 4x400 and as a results won the team title. It was their only relay win of the weekend but they did place 2nd in the 4x800 and 8th in the 4x100 to score some important team points. Leading the squad overall was Joe Sapone who anchored the winning 4x4 after winning the 1600 and the 800 earlier in the meet. Skyler Hall also added some important points by taking 2nd in the 100 and 4th in the 200. Ryan Kelley was also 3rd in the 800 to go along with the points put up by Palmer Schultz (3rd in Long Jump), and Connor White (5th in Pole Vault). This was a true team effort.

Whitefield was able to hold on for 2nd place overall, ironically because Sapone held on for the win in the 4x400. Had that not happened, Holy Innocents would have still won but Landmark would have been 2nd place. Whitefield had alot of athletes competing in this meet. Brenden Vanderpool won the pole vault while Taylor Wade and Peyton Golden went 1-2 in the 1600 and 2-4 in the 3200. They scored in 3/4 of the relays and picked up a few more points from Ayden Duncanson, Jonathan Johnson, Andrew Rothwell, and Andrew Glover.

Landmark would have to settle for 3rd in a tie with Athens Academy, but it was a valiant effort all the way to the very end. They started off with some big field event points from Joshua Smith who won the long and triple jumps. Brandon Montford, Joshua Harris, Sean Alleyne, Archie Burgess, and Micah Dennis would add some more valuable field event points as well. Ian Tukes scored in both hurdles while Dennis scored  in the 400 and their 4x400 relay team was runner up.

Athens Academy also placed 3rd in a tie with Landmark. They got 20 big points from Johnerio Holt who won both throwing events. They would also score in all four relays showing that they had the depth to make it a true team effort. Their stars on the track were Jackson Scruggs and Robbie Dillon in the distance, Austin McGee in the sprints, and Ryland Marley in the hurdles who all scored points in their events.

Performer of the meet - Has to go to Joe Sapone. He won 3 events for his team in a tightly contested battle. On the final stretch of that 4x400 he got passed but summoned everything he had to make sure his team would be at the top of the podium. You can't coach guts like that and I think all of us are really excited to see what he will do next year as a senior.