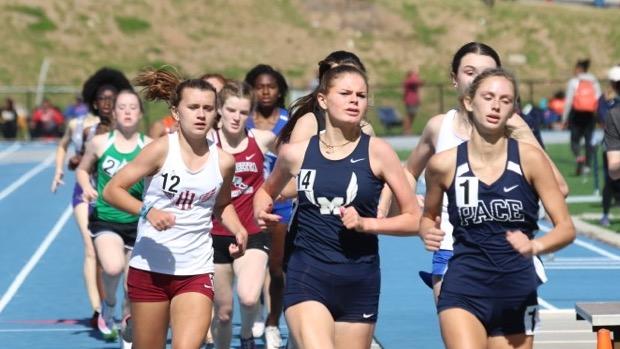 It has been said that not only do you get fall, winter, spring, and summer weather during a track season, but sometimes you get it at one track meet alone. Pack your coat, but don't forget the sunscreen. Work your tan but be careful of hypothermia. And do scarves go well with singlets?

Still, there's a perhaps underrated side of Mother Nature that can make a meet more of an adventure than it already is: The Wind - and both of those words are capitalized for a reason.

At a meet in late March, for example, all the bib numbers almost blew into the Chattahoochee before the first gun was fired. Tents, recently attached, became unhinged but were fortunately caught before the parts became potential flying weapons. Hats blown off heads hit the 200-meter split in Olympic time.

"You have to tell your runners to sprint on the good side," one coach said.

"If you get out quick but get blown back to the start, can you restart your watch," a runner asked with a laugh.

Don't get me wrong, runners are no strangers to the elements. This author, besides running the full 26.2 in windy conditions, once had to walk a 25-pound dog in 85-mile per hour winds during a hurricane. Think Snoopy, trying to pull Santa's sleigh. Or try it sometime...

Moving over to the field event side of things, what about those poor pole vaulters? "If it's a tail wind, you're in a great shape," a coach said. "If it's a side wind or in your face, you are royally screwed."

The visual of rising up towards the bar only to land in the long jump pit comes to mind, though speaking of the long jump, being on the good side of Mother Nature in that event could have the entrant flying and laughing in delight. The other way not so much.

Still, one coach did see the positives about being outside all day in the conditions.

"It's not bad - wind burn goes away quicker than sun burn," he said.

Joking aside, it's an element to contend with. Face it, most distance runners aren't exactly football linemen material as far as size. Some weigh less than a 100 and many more are allergic to weight rooms.

"If I had straightened up on the back stretch, I would've ended up at the Okay Corral," one of the more petite female racers said after her relay leg. "It wasn't exactly P.R. race conditions.

From a coaching perspective, you pump your arms, lean in, and tuck in behind other runners. You move forward. Stay positive - at least one side of the track will have the wind at your back.

"All I had to do on the good side was jump," another runner joked.

That, and be careful not to get hit with unattached debris.

In closing, maybe it's yet another beauty of this sport. You survive all four seasons. You run into the teeth of the wind with a moving, impartial clock that couldn't care less. You wonder if you're going to get put in yet another relay. And you do all this knowing that having a good hair day while doing all of the above is simply an impossibility.

Fittingly, and as the day winds down, a hat flies off a coaches' head. He looks over, laughs, and says, "you should write about this."

Perhaps I will. But first, I must take my sweaty, cold, wind-burned, thawing out, and tired self to bed. And tomorrow, maybe I'll buy me a new hat.