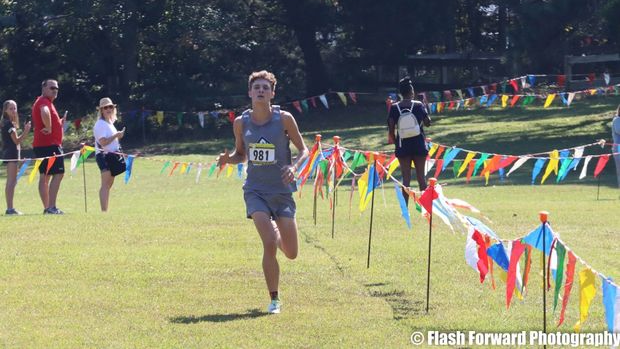 Jackson Russell has quietly had a very strong season and is capping it off at Carrollton on Saturday thanks to his win at his region meet.

Well, we finally made it to November. The regular season has come and gone, and now the region meets have all finished. That means there's only one meet left in the GHSA season-I am talking about the state meet at Carrollton, of course. However, it would be a shame if we jumped ahead to discussing state without first recognizing the great performances of this past week. After all, the state championships are only exciting because they bring together runners who have put together fantastic seasons, from August to November, from all across the state. This week, we will recognize individuals who had great region meets despite flying under the radar all season long. In fact, every runner on this list finished in the top 3 in their region! Some of these runners may be in contention for a top 10 spot at the state meet, and some may be happy just to run at state at all, but all have had successful seasons. After all, you can't argue with the results! Finally, I would just like to add that each week many deserving runners or teams get left off of the list due to the sheer number of great performances that happen each week. These past two weeks were especially difficult with how many meets there were to choose from. I would just to give my congratulations to all runners this year, and especially to the seniors whose seasons ended this past week or will end next week. It's no easy feat to finish a tough 15-week cross-country season! With all of that out of the way, here are the Unsung Heroes for Week 11.

As always, "Unsung Heroes" recognizes some great individual or team performances from this past week across the state of Georgia that might have flown under the radar or gone underappreciated. One "winner" or "honorable mention" is selected from each of the 8 GHSA classifications for both boys and girls. Enjoy!

Ruddell, a junior at North Cobb Christian, has had his ups and downs this season, but he looks like he has saved his best for last. He put together his best race of the season at the Region 7-A Private Championships, winning the race by just two seconds over Ryan Glass from Darlington. Ruddell has been a leader for the Eagles all season, and he proved that by breaking 17:00 for the first time at region. Look for Ruddell to make a run at the top 10 at the state meet!

McGinnis was just a freshman this year, but you wouldn't have known that just from looking at his performances across the season. In five races this season, McGinnis never finished lower than fifth, but he hadn't won a race until region. McGinnis prevented a Pike County sweep at Region 2-AAA by winning his region meet by nearly 50 seconds with a season-best time of 16:40, which is one of the top 10 performances among 3A boys this season. The sky is the limit in 3A for this young Cougar from Cordele!

East Coweta teammates Houston Hamby and Troy Blackwood have attracted the most eyeballs for the Indians this season, and both are legitimate top-10 candidates. At Region 2-7A, however, East Coweta swept the top three spots, with Cole Martin grabbing third place with a massive season best. This was an 80-second improvement from his region time last year at the same course. If East Coweta makes noise in the 7A state meet, they will likely have Martin to thank for pulling up the back half of the top five.

Schroeder capped off a great senior season with a second-place finish at Region 7-AA with a time of 21:49, which only missed her season best by three seconds. As the leader for Model all season, she steadily improved throughout the season to culminate in a top-30 time for 2A, which would be a great achievement if she could achieve that place at state, giving her younger teammates valuable state experience, as the next 6 fastest Model runners are returning for next year.

Landgren might not be a favorite in the AAA state meet, but she deserves recognition nonetheless. A four-year runner for Rockmart, she improved her PR each year, and saved her best-ever time for last. With her 22:51 at Region 6AAA, she broke 23:00 for the first time and was within 15 seconds of taking home the region title. Her second-place finish nearly led Rockmart to an upset victory over Ringgold. Landgren is a testament to how dedication to the sport can lead to improvement and eventually success!

Kieffer led Effingham County to a berth at the state championships in a competitive 7-team region meet by winning Region 2-AAAAAA by a comfortable margin. She's been a model of consistency for the Rebels, running her past 6 races in a 32-second range between 19:48 and 20:20. She's also won three of those races, so she has considerable experience running at the front of the pack. She hasn't run in any of the largest meets against the very best competition, so perhaps she is just lacking times on a fast course that would make her a top 10 contender. As it is, her season best ranks 16th, and she finished 11th last year, so look for her to surprise this weekend in Carrollton!