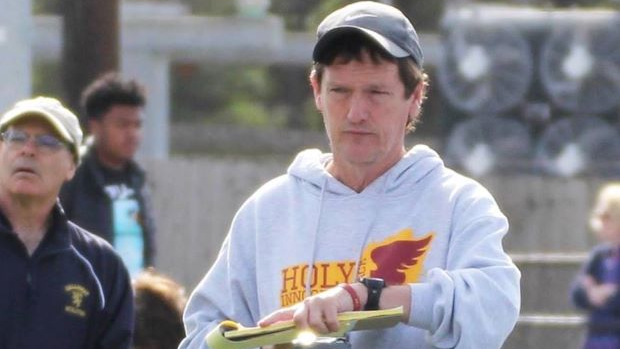 Confessions of a Cross Country Coach

Last decade - I think because God does have a sense of humor - this former tennis player and coach was named the head of cross country at my school. With nary a set of running shorts or shoes in my closet and my running resume consisting of completing a marathon, I - sweating profusely - ran off to Barnes & Noble to buy the latest copy of "Coaching Running for Dummies."

Not sure if that was the book's title, but whoever wrote it got my attention in the opening paragraph when he wrote: "Running is a tough sport. Face it, you might puke."

With my curiosity lifting my hope-to-be new passion, I had one other thing in my arsenal. It was a parable I read about the scared man going to work on his first day. Could he do it? Would people respect him, or would they laugh at him? Was he qualified? Who did he think he was to take this job?"

The guru told him one thing: "You don't have to know how to do the job yet; you can learn all that on the fly. All you have to do is love everyone you're working with, love what you're doing, and that - in itself and alone - will take care of itself."

The internal smart aleck I carry in my head laughed when I first read that, but now in my double figure years in this sport I believe that - unless you're working for NASA or somewhere -  that story has PLENTY of merit.

There was the day at Asics, when the kid from the other team wanted to know the name of my last place girl who was still trudging through the 3.1-miles. Not sure what he wanted, I told him anyway. He raced across the infield, joined her in the woods, and got the entire spectators to chant her name when she finished in non-warp speed.

There was our very own girl who - on a 95-degree day in Darlington - stayed in the finish chute to help up each collapsing runner. And there are my own memories of finish chutes - one that did involve puking and me catching the brunt of it. Gross I know - but there are such things as Rites of Passages, yes?

I knew then that I was dug in. Committed. Tried and true, standing with my yellow note pad in the heat and the wind and the facial ejections of my runner on my clothes. They could now officially call me coach and I, instead of turning red, would simply answer politely, time my next runner, carry forward.

The guru was right because there are SO many people you can learn on the fly from; there are camps and Milesplit posts and crosstown rivals and people at starting and finish lines. Not to get sappy, but you have to love this crazy sport - who else sets the alarm for 5:07 a.m. on a Saturday? Saturday is for catnapping and coffee and couches, reading and resting and writing.

In moving on, I still have that book - though in further confessions I never read the whole thing. It took one paragraph and one race to draw me in, beckon me further, infuse me with new life in this aging soul.

It's what keeps me coming back to that priceless second - the one after "Runner's Set" but before the gun. That second when it's all about to hit the fan, but that second before there's going to be so much more than just one winner.

In closing, this coach did eventually wash those clothes, though they were a souvenir at the time - the ticket stub of your favorite concert if you will. And the tennis equipment is all gone- off to the Good Wills and to the trash cans of the world.

But I have to smile when I see those shoes, with caked grass from the last course, the mud from the turn at Mile 3, the blood on the socks when a blister broke.

So, thanks for that guru, whoever he was. And thanks to you all, for being who you are, doing what you do, and transferring your passion to those kids, each and every one. You remain contagious, and for that I remain grateful - dirty clothes and all...