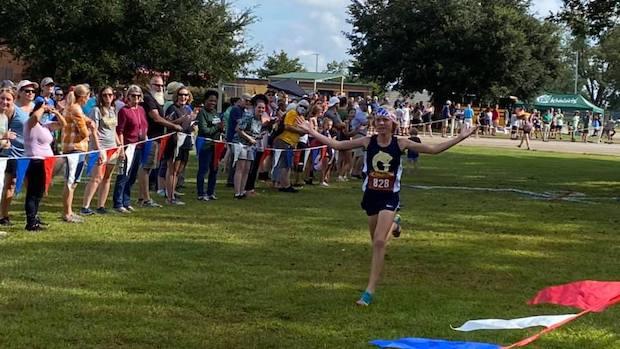 Editor's Note - Georgia Milesplit is in need of a photographer for meets in South Georgia. This photographer could be an amateur or a professional. Please email milesplitga@gmail.com if interested. I would love to get more of these meets covered!

The Westover Invitational returned to Robert Cross Middle School in Albany for its 40th running this past Saturday. Although the meet has lost some of its luster and no longer attracts many schools from the Atlanta area due to sharing a date with ASICS, Wendy's, and Great American, it's still one of the largest meets in Southwest Georgia. The 2021 version of the race saw a slightly redesigned, two-loop 5000m course that avoids the sharp turns of the past and the horseshoe finish around the football field while still keeping the scenery of the surrounding pecan orchards and the PR potential one would expect with the absence of any hills or challenging terrain.

The racing got underway at 8:00 AM with the varsity girls, and it quickly became a contest between Central-Phenix City's Abigail Garner and Adley Burkes and Jillian Strickland of Roswell's Centennial. Garner was able to pull away from Strickland on the second loop, breaking the tape in a time of 19:59.85. Strickland followed five seconds later with Burkes and Central's Haley Wilson taking 3rd and 4th. Placing 3 runners in the top 5 wouldn't be enough for Central, as their #4 and #5 finished in 39th and 51st. Led by Strickland's runner-up finish, Centennial placed the rest of its scorers in the top 20, besting 2nd place Columbus by 20 points (61-81). Abigail Garner gets the win Jillian Strickland gets runner up Centennial's success continued in the boys' race. Michael Finley of Centennial and Worth County's Eyan Zupko took the race out aggressively through the first mile and remained together at the 2000m mark. Zupko faded over the second loop and was eventually caught by Finley's teammates Sam Ead and Jake Masaschi. Finley took the win in 17:01 while Ead and Masaschi made moves that Zupko couldn't cover in the final 400m to give Centennial the race's top 3 finishers. Unlike their girls' team, Centennial's boys had a much more compact 1-5 spread and easily took the win with 41 points to Columbus High School's 117. Michael Finley and Eyan Zupko at the halfway point The final races were the middle school 3ks. In the boys' individual race, Grace Christian's Walker Elrod won in a time of 10:44, while Calvary Christian School of Columbus took the team win with 33 points over Lee County's 69. In the girls' race, Lee County appeared to be poised to take the team title by placing three runners in the top 5. Madisyn Goddard took the win, with teammates Hadiyah Ali and Harlee Oosterveen finishing 3rd and 5th. The Lady Knights of Deerfield-Windsor, however, had a much tighter pack. Margaret Hodges finished fourth, leading four Lady Knights to top 10 finishes and a 3 point team win.