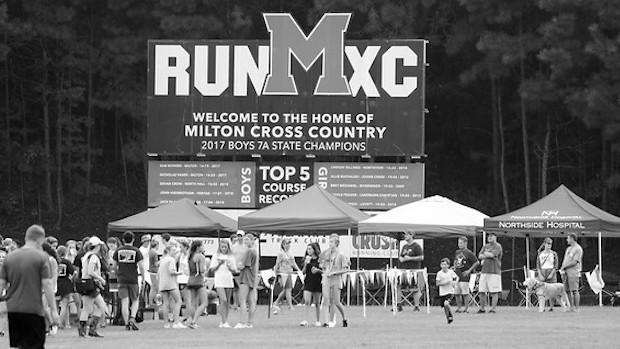 The Milton Invitational is loaded with talent on Saturday. Photos by Dennis Blanco.

It's time to see who really has the strongest team in the state as 26 schools converge on the notorious North Fulton course at Milton HS to contest their Invitational meet for the 8th time. This will be the home Eagles largest meet ever on this historic course with over 1300 runners slated to compete. The course is unchanged since first used in 2007 with the course records of Sam Bowers (16:19-2017) & Lindsay Billings (18:43-2016) still the standards.

In a battle of 7A powers, Lambert, the host Lady Eagles of Milton & South Forsyth look to be the favorites coming into this weekend's action (Blessed Trinity not running their varsity). Lambert is coming off a big meet win at Berry Clara Bowl just last weekend besting 14 schools with their top-3 finishers placing in the top-12. Milton was a solid 4th at Cherokee County Classic just behind ranked teams Hillgrove, Pope & Harrison and defeating 15 programs. South Forsyth is coming off a narrow loss to Pace (54-55) at the North Georgia Championships meet 2 weeks ago while ahead of 7 other scoring schools. All three teams have significant spreads of their top-5 scorers so it's going to come down to how well all these teams pack up as all three teams have individual favorites as well. This may come down to each team's 5th finisher or maybe even a 6th finisher tiebreaker!

Other teams to watch: Cambridge, Dunwoody

Forsyth County schools again figure prominently in the boy's team race with West Forsyth, Lambert, and host Milton in the mix for the title. The Wolverines of West are coming off a big out-of-state meet win in Florida at the Spikes & Spurs meet besting 14 schools convincingly with a strong up-front presence. Defending boys (and Eagle Cup champions) Lambert is coming off a win and team sweep at Berry Clara Bowl besting 6A Sequoyah by 47 points and should not be counted out for the team win. Host Milton has a big advantage being on their home layout but gaps after their top-3 could be where the Eagles are vulnerable, but their upfront strength will keep them in the team battle. With some teams missing top-runners due to ACT testing the boy's race should be close. STATE CHAMPIONS! It's not very common when the defending state cross country champion races the defending state champion at 3200 meters on a course that is considered one of the toughest in the country. But the heavy favorite is Atlanta International School's senior Cara Joyce. Joyce was 3rd at this meet in 2019 so knows the course and is the fastest on paper coming into the meet (18:36) and could challenge for a top-5 course performance but will need to run sub-19:55 to do it. Challenging her will be the two defending state champions in junior Carmel Yonas of South Forsyth (XC) & senior Ashley Thompson (3200m) of Gainesville. Yonas has run 18:55 this season and Thompson 20:18 and both are great racers! Lurking close behind is Dunwoody sophomore Clare Shelton who as an 8th grader won the JV race here in 2019 and has raced here before in the AlphaCrush youth meets. Shelton could challenge Alex Cameron's 20:08 performance from 2014 (6th best on the course ever) to become the best Dunwoody athlete on the Milton course. With Westminster & Blessed Trinity not running their varsity, the individual race is wide open with team contenders having runners challenging for the top-honors. South's junior Ben Bergey is the prohibitive favorite after his big win at Pickens a few weeks back & followed that up with a win at the North Georgia Champs meet the following week. Fellow junior Spencer Etheridge of Alpharetta will also be up in the mix & near the front after a massive PR at Bob Blastow. Also in the mix is Trent Bell, the senior from West Forsyth, who is coming off a 4th place finish at their Florida meet and will get to race region rival Bergey for the 2nd time this season. Seniors Lyle Donovan of Cambridge, Dillion Watson of Woodstock & Josh Helms of Sequoyah should also contend along with Milton junior Corey Chambers who has raced this course 6 times previously and was the Eagles time trial winner. Unique to this meet is the awarding of the Eagle Cup. The overall program which scores the best in all six races contested (open/JV/Varsity) will be awarded the Eagle Cup and will get their school's name on the permanent trophy, receive a team trophy, and will have a waived entry fee to the 2022 9th Milton XC Invitational. The Lambert Longhorns are the defending Eagle Cup champions from 2019 (last contested).  Past champions include South Forsyth (2018), Marist (2007) and Milton (2008-2011)