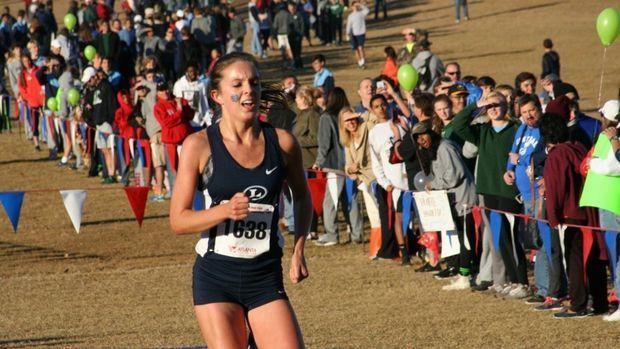 Upon entering seventh grade, former Lovett and Columbia University standout Serena Tripodi wanted to play volleyball. Though her main sport was soccer, all her friends and the "cool" people played volleyball and she wanted in on it.

"The problem was, we always took a family vacation the first week of August and I didn't get back until the last day of tryouts," Serena said. "The coach stuck with her guns; she wouldn't let me be on the team but suggested I go out for another fall sport. Maybe I could try again the next year?"

What was a Serena to do?

"I was bummed," she remembers. "Still, I had another friend that suggested I come to cross country as a way to stay in shape for Top Hat Soccer come spring. Funny how things work - sometimes it works out when you don't necessarily do the 'cool' things."

Running fans across Georgia may find this hard to believe, but Serena didn't blast into the cross country world in either her seventh or eighth grade years with eye-opening times. "I was actually more towards the back of the field," she said. "The thing was, though, there was one girl that was a couple of years older than me, and I wanted to be like her - not necessarily to beat her but to be good like she was."

In an understatement of all understatements, Serena succeeded in getting good 'like she was' and well beyond. Known jokingly but not really as the "Michael Phelps of high school running," she went on to capture nine state individual championships between cross country and track, along with four team titles.

"Freshman year things got more intense," she remembers as far as her training and her results. "That season I got second in state in cross country, and no one was more surprised than I was - including my coach (Chris) Mayer. I don't think that was supposed to happen."

That was the last time, however, when anyone would be surprised when Serena Tripodi came barreling down the last Carrollton hill among the leaders, as she won the cross country state crown her sophomore through senior seasons. If that wasn't enough, her 12th-grade time of 18:17 still remains as a course record.

In moving forward and to put it in a nutshell as best as possible, Serena used a powerful eraser in taking out Top Hat and school soccer teams from her spring schedules, as she - switching naturally to track - went on to win three state titles in the 1,600-meter run and three more in the 3,200, leaving her the most decorated runner in the more than distinguished Lovett history.

Coach Mayer looked back on her years this way: "From day one we knew we were working with something special, and she embraced that, and trusted her coaching. Her parents supported us, too, and they were confident she had the resources she needed. As a result, Serena became the hardest working, most consistent and determined athlete I had ever encountered. She didn't miss days. She had a growth mindset. She crushed workouts, and that is an understatement... what an amazingly natural racing tact, too.

"She was human. She had setbacks and we had disagreements and tough times. But without a doubt, she fell into a category of athletes who would set the tone for Georgia running for a few years. I will never forget the moment we both knew she qualified for NXN (National Cross Nationals) - a dream come to life. What an experience. Serena's time at Lovett would inspire a future of running culture. To be cliche, "what was The Secret, they wanted to know."

Even before high school graduation, and with all of the finish line tapes Serena was breaking, recruiting wars had broken out as well, and it was Columbia University of the Ivy League that won this more than competitive race.

As it happened, the only thing that successfully - but temporarily - slowed Serena down was COVID 19, as, before the pandemic, she helped lead the collegiate Lions to three straight Ivy League titles.

"I was fortunate to get in three cross country seasons and two in track," she said. "Sophomore year of cross country was big as we got to go to the NCAA's - I was our sixth and/or seventh man and that was a good team with so much depth."

Then came COVID and for Serena - like all other high school and collegiate runners - it was a case of 'On your mark, get set, stop!' "It was frustrating," she remembers. "It was particularly tough our senior year when every other conference had spring sports except the Ivy League. I may or may not have written a strongly worded letter or two to our athletic office (laughter), but it was tough.

"Still, the benefits and silver linings were that I got to spend quality time with my friends and family, and I was able to close out a normal college life."

Moving to present day, you can put viruses into the mainstream, but you can't take the competitive juices out of the Serena Tripodi's of the world. Now working in ad sales for FOX on the entertainment and sports sides, she is currently signed up for her first competition in two years - the New York City Marathon slated for November 7th.

"This is so exciting," she said. "I'm my own coach. I mean, I'm getting advice from people and finding online tips about it, but this is more of an individual dream of mine instead of the old way of 'you have to run!' This is a unique perspective for me - there's no pressure this time though I do have a goal or two I'm keeping my eyes on."

Setting goals and achieving them - it's easy to say Serena Tripodi is good at that. Funny thing though, there once was a time when she just wanted to bump, set, and spike on a volleyball court with her friends - play the 'normal' sport, be with the 'cool kids.'

Looking at it all now, she's not only helped make cross country and track a couple of pretty cool sports, but she's proven a major part of making running the 'new normal' in the process.