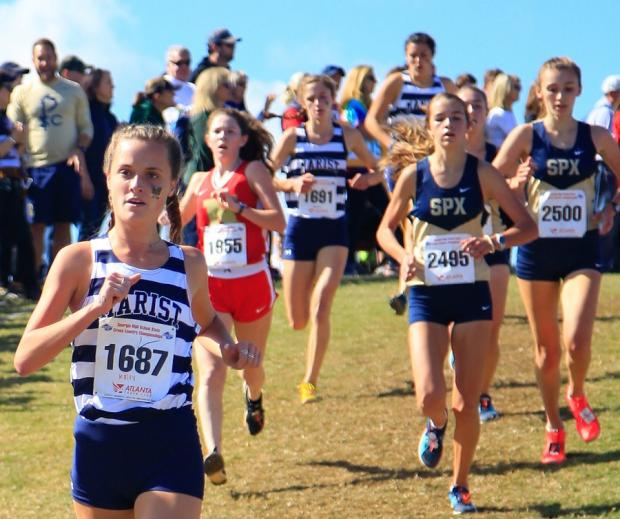 Its been a season to remember for the 4A Girls, as Marist and St. Pius X will duel one final time for the State title with All-Class bragging rights on the line. Its been a slightly down year for 4A Boys, except for Denmark HS coming on like a blazing comet across the Georgia sky in October, owning the 7-AAAA meet on Marist's home turf. The weather forecast keeps changing every day, but the latest update calls for a chilly 35 degrees on Friday, with 5-10 mph winds at 9am, with a high of 56. Also, Daylight Savings time does not end until 2am this Sunday, meaning its going to be dark. Its a good thing the GHSA is seriously considering moving back the start/end of the 2020 XC season back 2 weeks! This has been the most confouding season ever to rank 4A Boys (I ranked it as we had no takers) From week to week, it was difficult to ascertain who ran full strength, etc. One thing we do know, is that St. Pius X top runner coming into this Fall (Jack Voss) is not on the squad for State. Marist has experienced troubles this season and seem to be having a 'down' year, especially after placing 4th on their home turf at 7-AAAA. Denmark HS has been a rising star all season with 2 legitimate front runners and depth, and is a serious threat to breakup the Marist/St. Pius X monarchy that has existed the past 7 years. Oconee County and Chestatee seem destined to battle for the Final Team Podium spot, with North Oconee and upstart Cartersville scrapping for high team finishes as well. The 4A boys individual race is likely to shape up with a tight chase pack watching Justin Wachtel's back after a mile. Wachtel has defeated all challengers this season and is one of Georgia's best hopes to qualify for Foot Locker Nationals. Justin has went sub 15: twice this Fall with a blazing pr of 14:26 at Alexander/Asics. There is no clear next fastest harrier after Wachtel, but many will be racing for big team points for a State title. Ethan Ashley and Karthick Kochuparambil of Denmark clocked 15:46/15:47's at Asics and the front running duo ran great at Region 7-AAAA. North Oconee's Davis Potts was the titleist at 8-AAAA with team mate Alex Thomas :06 back in 3rd. Chad Dewitt of St. Pius X nipped Thomas taking 2nd in that race and sports a pr of 16:07 at Coach Wood and Andrew Clay should be in tow as the Golden Lions will be defending their 2018 title. Others to watch out for are: Joshua Fuller of Blessed Trinity, Mike Rosenbluth of Druid Hills, Luke Gaddis of Chestatee, and Jaylen Mallett of Marist. Its all come down to this, as Marist has beaten St. Pius X 3 times this Fall at large, ultra competitive meets. The formula has remained very consistent, as St. Pius X is stronger from 1-3 and Marist's depth has trumped that advantage from 4-7. I don't see how this is going to change in one meet, even when mixing in a strong Blessed Trinity squad that has 2 great frontrunners, as well as  Oconee County. The Warriors have once again mustered a solid squad having 2 gals that are contenders to finish in the top 10 including frosh Jenna Champer who won the Individual Region crown besting Morgan Vaden of St. Pius X. But, Blessed Trinity has more depth which could make a difference for that 3rd place Team Podium spot. There is a wide gulf between these 4 top squads and the others, and its wide open who will place from 5th to 8th with White County, Druid Hills, North Oconee and Denmark HS. Whoever wins this race is going to score 1 huge point for their team. The top 15 scorers should be packed with St. Pius X, Marist, Blessed Trinity and Oconee County runners. Its going to be rematch up front between Hannah Miniutti of Blessed Trinity (17:54) and Morgan Vaden of St, Pius (17:56). They have only went head to head once this Fall with Miniutti forging a late charge to win by less than :02. Vaden has owned Emily Little of Marist besting her all 4 times, but Little did win Battle of Atlanta and was 1.5 seconds behind Miniutti at Region 10 days ago.. Kathleen Schellman of Marist may have been injured early in the season, but has been running very well beginning at Warpath on 9/14, and got her pr' of 18:08 at Great American. Mary Brady of St. Pius X has beaten Schellman 3 out of 4 meets this Fall and has a pr of 17:59 at Coach Wood. Jenna Champer (a freshman) has been sensational for Oconee County and won 8-AAAA (her home course) finishing ahead of Vaden and Brady last Tuesday. Kelly Ann Sutterfield gives the Titans of Blessed Trinity a second strong frontrunner having a pr of 18:19 at Asics. Watch out for horde of runners from Marist and St. Pius eating up the next spots including: Nicole Pizzo, Sofia Laskowski, Nora Solomon and Emma McEvoy of Marist,  Catherine Breault, Hannah Schemmel, Grace Vonbiberstein and Cala McEachron of St. Pius X. Others looking to crack the top 10 are Phoebe Brodrick of Oconee County and Katie Hamfeldt of Blessed Trinity.