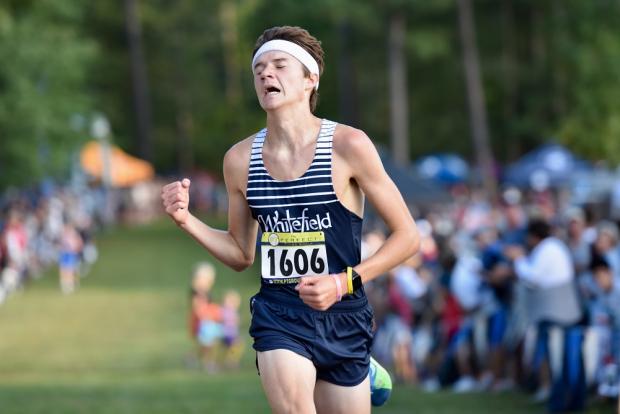 It was a great Saturday morning of racing on the beautiful Heritage Christian Church Cross Country course at the 8th Annual Starrs Mill AT&T Panther XC meet as 31 high schools and over a dozen MS programs competed. When the Varsity girls kicked off the racing it was not quite as hot & humid as battle of Atlanta, and the course is shadier than Nash Farms. MileSplit GA was onsite and a large photo gallery has been posted. There were  some of the top runners in the state on the starting line in this race along with defending team champ Auburn (AL) who have won 2 straight 7A State titles in Bama'. Sr Samantha Rogers jumped out to the lead early with Luna McCauley and Jordan Walter of Paideia, Madison Kennedy and Katy Earwood of Evans, Erin Fegans of Landmark Christian, the Union Grove sister duo of Gabby and Bianca Parsons along with a streak of Auburn Tigers. At the Mile mark, Fegans had the lead, with Rogers right on her shoulder. They separated from the chasers creating a large gap staying together thru the next mile. Evans duo Earwood and Kennedy were running in tandem and solidly in 3rd/4th positions. But Fegans dropped the hammer on the final loop opening up a comfortable lead and sped in for the win clocking an 18:18.53 leading Landmark to a 3rd place team finish. Rogers crossed the mats 2nd going 18:27 as Auburn defended their title with a victory margin of 51 points over host Starr's Mill. Katy Earwood and Madison Kennedy were very impressive for the Knights as they fed off each other's energy the entire race with Sr. Earwood 3rd at 18:59 and Kennedy 4th in 19:00  Laney Doster from Jones County had another strong race placing 5th overall at 19:12 and Gabby Parsons from Union Grove was 6th place going 19:23 and Evans' Simone Rojas had a nice race clocking a 19:30  Darby Olive was the top runner for 2nd place Starr's Mill placing 10th in 19:36 Fegans crossed the Finish Line in a winning time of 18:18 Auburn's Varsity Girls were all smiles before and after their race The Varsity boys race was absolutely loaded on the front end individually and with powerful 7A Bama' squad Auburn, 5A State champ (host Starr's Mill) and 3A champ Westminster who have gotten off to a fast start this Fall. East Coweta's Kyle Harkabus took the lead with Devin Wade of Whitefield Academy also getting off the line strong early on. Around the pond near Mile 1 Harkabus was leading the race followed by Landmark's Zack Truitt, Wade, Zachary Roe of Westminster with Jonathan Greene from Evans and Domonic Macias of Union Grove chasing. By the time they reached the beginning of the final loop, Wade had gapped the pack with Truitt, Harkabus and Roe equally spaced :05 apart from each other. Wade continued to slowly extend his lead crossing the finish line first in a great time of 15:24 Wade's performance it turns out is the 2nd fastest time in course history only behind 2016 Foot Locker finalist Jacob McLeod's 15:02 at Georgia Meet of Champions in 2017. Harkabus pushes hard towards the mats

Harkabus put in a big push on the final uphill stretch passing Truitt taking runnerup honors in a time of 15:46  Truitt hung tough placing 3rd in 15:52 (it's possible he may have been fatigued from the giant effort he put in winning at Providence last weekend) Jonathan Green of Evans passed Roe of Westminster late in the race claiming 4th overall going 16:01  Roe placed 5th at 16:06 and team mate Matthew Fernando 7th at 16:11 sparking the Cat's to runnerup in the team standings. Auburn had too much depth for the Georgia squads as the Tigers put 5 runners in the top 19 spots with Jr. Stewart Brown setting the pace taking 6th overall in 16:08 Host Starr's Mill raced well on their home turf taking 3rd as a team led by Jr. Joseph Muzzillo's 11th place effort at 16:46 This was the most competitive MS Girls race upfront of the young season thus far. Morgan Grace Sheffield of the Great Strides Club won the individual race in a sweet time of 11:41 leading 'Strides' to their 3rd consecutive team title this Fall. It appears Landmark Christian may be in good shape for the future as 7th grader Shari Brown was runnerup at 11:48 with Turner Guerard 4th in 12:03 Auburn MS was 3rd as a team led by Myla Ragan's 3rd place effort of 12:03 and Ashley Butts ran unattached placing 5th in 12:17 Dean Rusk MS is going to be a large school contender at MS State after claiming 2nd as a team with Lilly Savage 8th (12:27) and Addison Higgins 9th (12:32) It was another Saturday of Great Strides completely dominating the boys field as they scored 16 measley points almost perfect scoring the race. The top 4 in order were: Reid Latimer who won his first race this season going 10:26, Hayden Nicholason 10:35, Ian Vinson 10:37 and Liam Nicholason at 10:42  Alex Lincoln-Velez from Auburn Jr HS placed 5th overall posting a 10:42 leading the Tigers to 2nd place. Evans MS was 3rd team wise with Sawyer Cripps leading the Knights charge placing 9th at 11:08 its always refreshing to get a look to see what freshman could develop into top runners for their school's program. Denver Oates of host Starr's Mill was the top male getting the home fans charged up clocking a 18:30 and Jada Dixon of Wheeler HS was the top gal showing some promise in a time of 22:11 Railey Prins from Smiths Station poses with her coach

It was a battle of Bama' JV squads in this race as Auburn bested rival Smiths Station by 4 points at 35 to 39. Individually, 2 8th graders and a freshman battled for top honors with Railey Prins of Smiths Station the overall winner going 21:54, Jasmine Adkins of Whitewater MS 2nd at 22:15 with Audrey Hallam of Smiths 3rd a neck back also 22:15

Auburn is a power in the Southeast and their JV squad destroyed the field perfect scoring the race! The Tigers future endeavors look very bright indeed as frosh Maxwell Hardin sailed to the Overall win posting a 17:22 with Sr. Cole Arrington runnerup at 17:38 and frosh Thomas Parnell 3rd in 17:59. Clark Farrell of Cherokee HS was the top Georgian placing 6th at 18:14