One of the largest XC meets of the season had 66 teams come to the prestigous Nash Farms Battlefield course in far western Henry County this past Saturday. Temps for late August were very mild, actually near 60 degrees at the start of the boys varsity races, which runners must have loved after a brutal Summer. Even though the heat will be back in force next week and thru September. Video from races and photo gallery are posted. 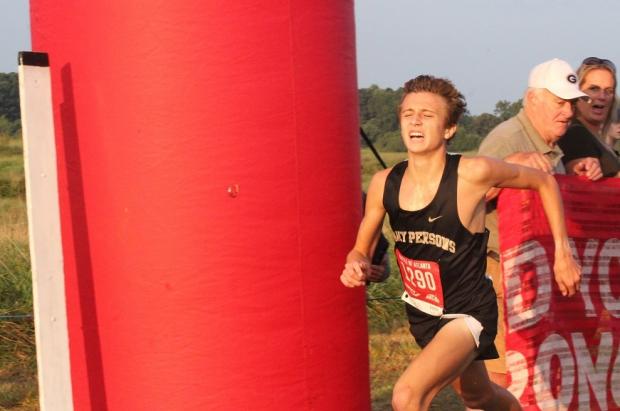 Wachtel races across the mats under the finish balloon.
Justin Wachtel, a sophomore from Mary Persons HS, was in the lead early, and maintained his position, taking the overall win posting a 15:50.52  Fellow soph Kamari Miller from Marietta HS hung tough with Wachtel, taking runnerup honors in 15:55 leading the Blue Devils to a 4th place team finish.
Lakeside Evans from the Augusta area always seems to have a top runner, and this season they have a trio. Senior Mark White raced to 3rd place at 15:58, John Isaac Autry took 5th in 16:35.09 and super frosh Sam Rich placed 7th in 16:35.36 leading Lakeside to 3rd as a team. Zack Truitt of Landmark Christian finished 4th overall in 16:30 and Brandon Potra of Hebron Christian took 6th clocking a 16:35.09. 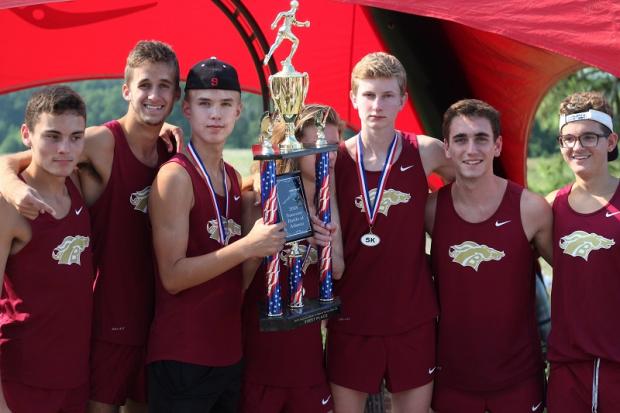 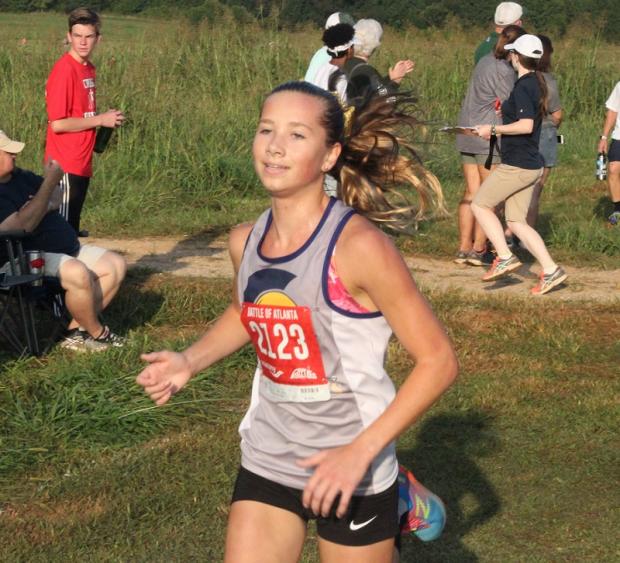 Presley Miles of Saint James (ALA) was flawless taking the Girls win
Underclassmen dominated the Varsity girls race, as Presley Miles, a sophout of Saint James, made the long trip from Montgomery (AL) and walloped the field clocking an impressive 18:25, winning by :49 taking the Overall girls title. Mackenzie Walls of Veterans HS (Warner Robins area) proved south central gals can compete with the metro studs, as she was the top Georgian taking runnerup honors going 19:14. Laney Doster from nearby Jones County is the top harrier this season for the Greyhounds, proving it going 19:38 for 5th overall. Erin Fegans of Landmark Christian raced to 6th place in 19:41.
Marietta's girls won the team title scoring 56 points. They placed 5 runners in the top 23 spots without their #1 runner in the results posted. Leading the Lady Devils were June Mwaniki placing 7th overall at 19:57 and Betsy Gordon in 9th at 20:08. Mandarin HS out of Florida ran well as a pack claiming 2nd as a team. Pope HS was a strong 3rd as a team with 131 points led by the 3rd place finish of Sophie Boice in 19:21. Union Grove just nipped Brookwood by a point taking the 4th team spot.
A team to watch in A Private may be the Paideia Pythons, as the fruit of their MS program continues to pay dividends..Their young squad took 6th as a team, led by Jordan Walter's 4th place effort of 19:32, with frosh Luna McCauley hanging tough taking 12th at 20:14.
MS Boys 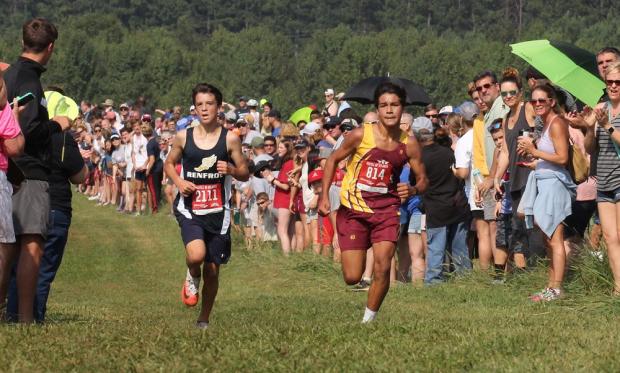 William Carlton (L) and Joe Sapone race past the crowd to a photo finish in the MS Boys 3k
It came down to the wire with a finishlynx photo finish to determine the MS boys 3k champ. But 8th grader Joe Sapone of Holy Innocents emerged victorious clocking a 10:22.19, Parker Miles placed 3rd in 10:54 and Griffin Bittel 9th (11:18) leading the Golden Bears also to the MS team title. William Carlton of Renfroe MS (Decatur) was hot on Sapone's heels, taking 2nd overall going 10:22.41 to propel his squad to 2nd place as a team. New to the GHSA, Trinity Christian Sharpsburg had a great 3rd place team showing led by Nicholas Andrews 7th place finish of 11:12.
MS Girls 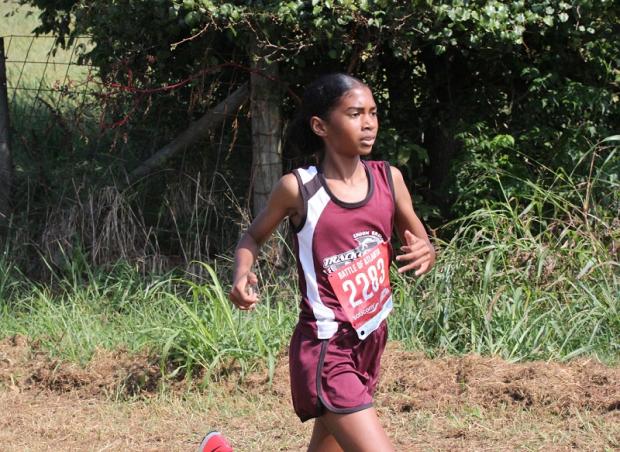 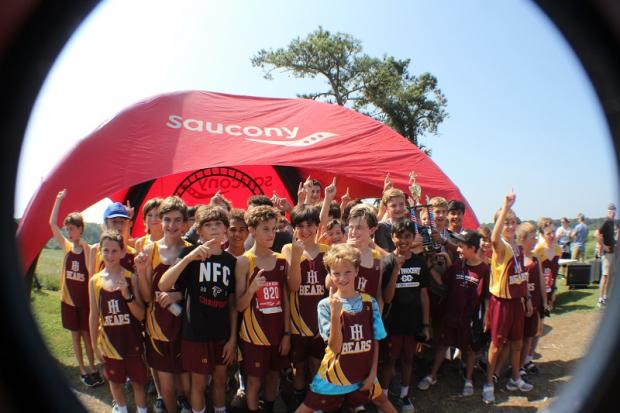 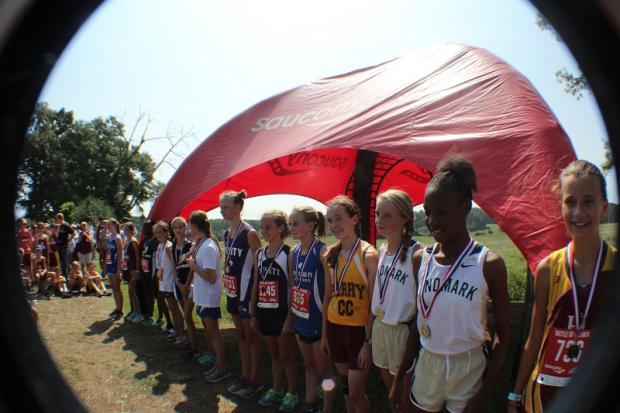 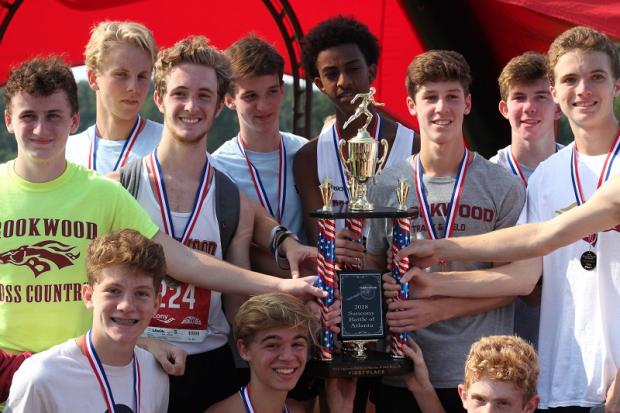 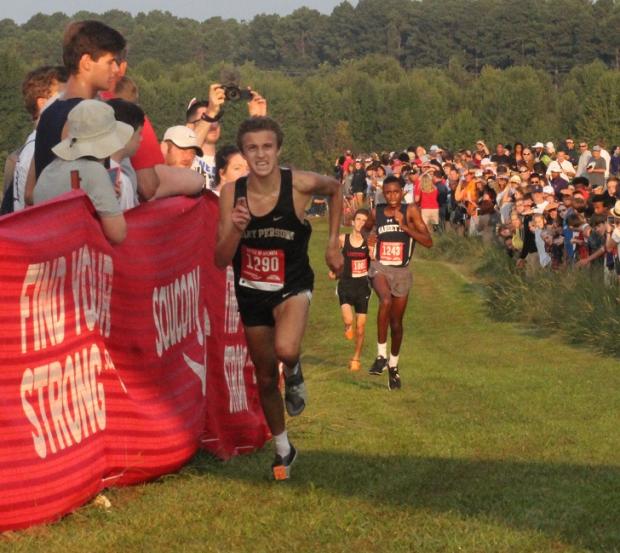 Wachtel of Mary Persons, followed by Kamari Miller of Marietta and Mark White of Lakeside Evans 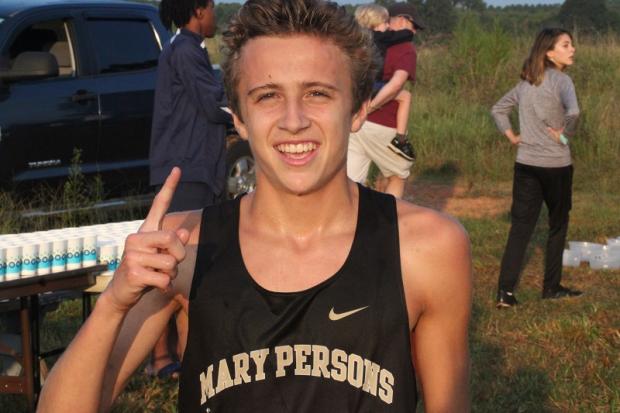