(photos by Daniel McCauley unless noted)

One thing is certain, A Private has come a long way in the past few years. With the ability to draw student-athletes from a large area and offer tuition assitance for those schools having resources, and some great coaching, the competition at the top is excellent now. To win a state title this weekend in A Private, requires balance and the studs to score big points in multiple events. The days of racking up 50-60 points thru field events is over as well, with many talented athletes across the class. Who can put it all together, not get DQ'd for false starts, impeding and come out champs? 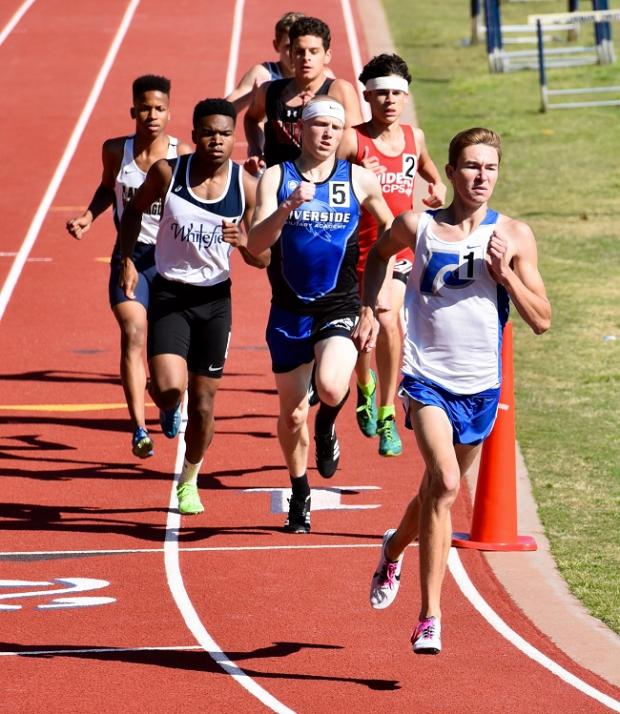 Griffin McCauley of Paideia leads a strong chase pack in the 800 at Sectionals
The 800m final is going to be a barnburner with 5 runners having pr's within 1.80 of each other with Griffin McCauley having the fastest time at 1:57.01 at a Marist home meet. The 100m will be blazing with 3 sprinters having pr's with a .04 spread led by Justin Menard of ELCA at 10.47.  Both Hurdles events will go to the wire between 2 guys, with Titus Moore of FPD having the upper hand in the 110h at 13.80 and Ziggy Zoller of Holy Innocents the edge in the 300h at 38.44. The High Jump has 4 athletes with pr's of 6-4, it may come down to technically who has it..  In the Shot, go watch LenNeth Whitehead of Athens Academy who has a mark of 67-3.50 this season!
Boys Team: 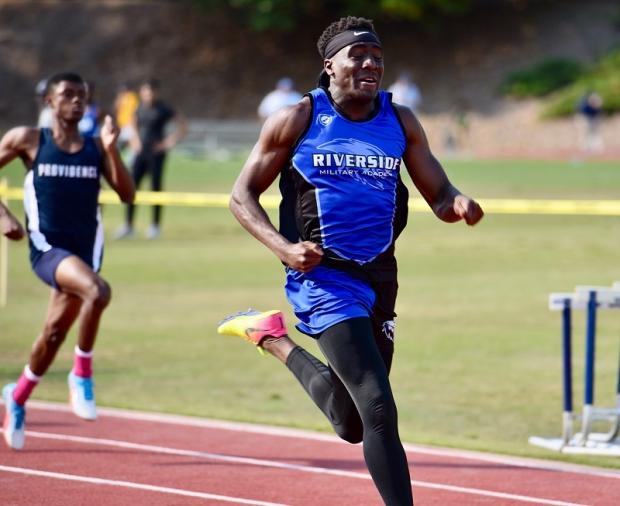 Charles Dimnwaobi of RMA
Riverside Military has looked good racing, especially at Sectionals. The Eagles lost a dozen points or more at Region, but on paper are the favorites. Charles Dimnwaobi resembles a wild freight train rolling down the track in the 200/100m and could be a factor in the HJ. Issac Teasley is the top Triple Jumper in A and can roll up points in the 400 (#1 time) and 200m. James Seymour surged late in the 800m taking first place at Sectionals and Orlando Stevens could earn a bronze in the 110h Their 4x100 and 4x400 squads will be aiming for Gold Saturday. 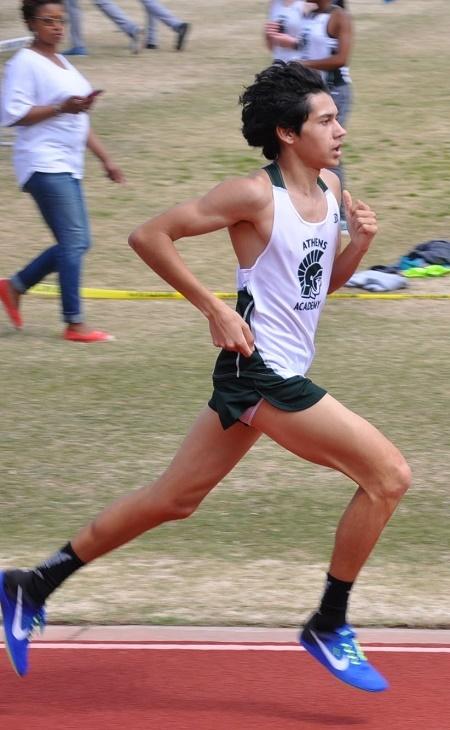 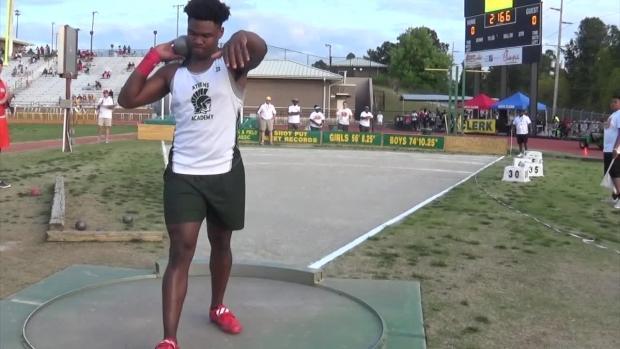 LenNeth Whitehead of Athens Academy (file photo)
Athens Academy looks like a lock on paper to be the only school chasing RMA. The Spartans are distance powered by Ryan Iyer in the 800/1600, Graham Blanks in the 3200/1600, and Alex Branch in the 3200. Trevor Bone has the #2 time in the 400m in 2018, and is sub 22' in the 200. The Spartans can pour it on in the throws behind Whitehead and Paul Mullinax in the Discus. 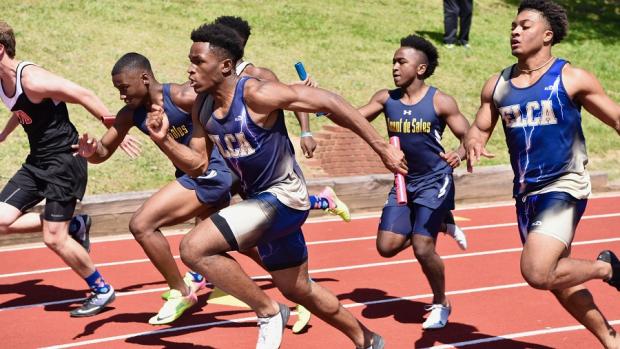 ELCA 4x100 Squad
Defending champs ELCA, seem to be a lock for the team Podium. They have speed blessed for years.  Speedy Justin Menard is a threat to double in the 100/200, their 4x100 squad has an impressive pr of 41.81 and their 4x400 will be in that lead group. Sean Queen could crack the top 3 in the TJ and Omar Daniels can score well in the 300h.
Its going to be a dogfight for the final team podium spot as no less than 5 schools are within 2 points of each other on the virtual meet using region and sectionals, including: Landmark Christian, FPD, Holy Innocents, Darlington, Paideia and Hebron Christian.
Some other great athletes to watch are Senior, Griffin McCauley of Paideia (800/1600), frosh Zack Truitt (1600/3200), vaulters- Christopher Lee of Wesleyan and Alex Thomas of Holy Innocents both with bars of at least 14-0.
Girls Races to Watch: 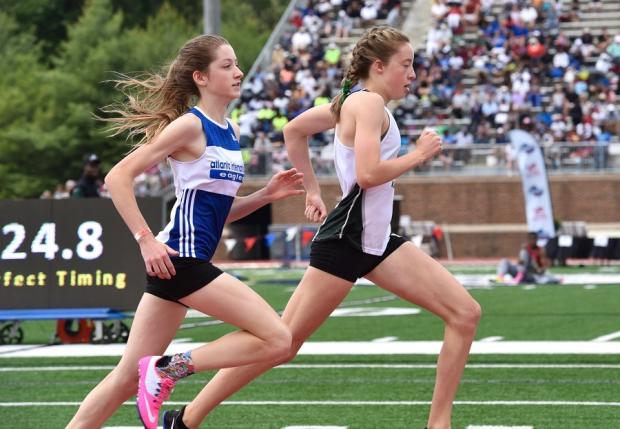 Reagan Mahoney chases Block at Berry in 2017
The 800 and 1600m will be very tight from 2-5 as they chase Anna Marian Block (who recently went 2:09.83 at a UGA Meet) This will be the 3rd meeting in 4 weeks where Kristin Stephens of ACS and Megan Lynch of Wesleyan race in lanes 4 &5 against each other in the 100/200m. Look for photo finishes in both. 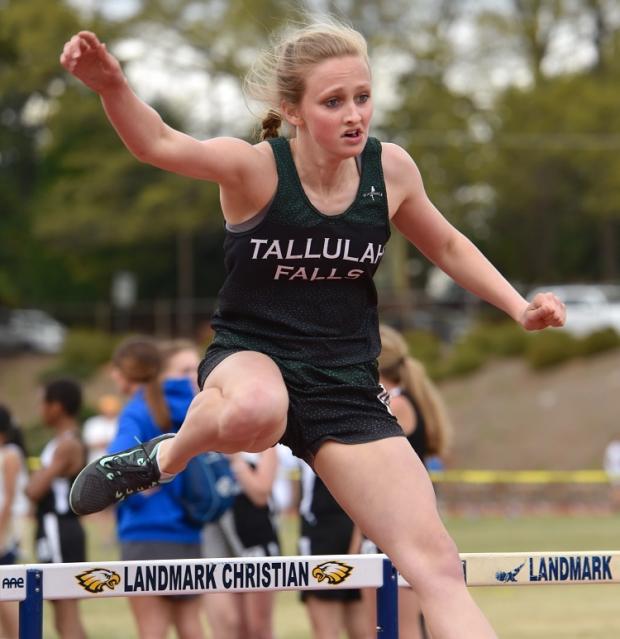 Anna Davis of Tallulah Falls
Both hurdles races will be tight as Anna Davis from Tallulah Falls and Katie Phillips of Athens Academy dial it up one last time in their HS careers. 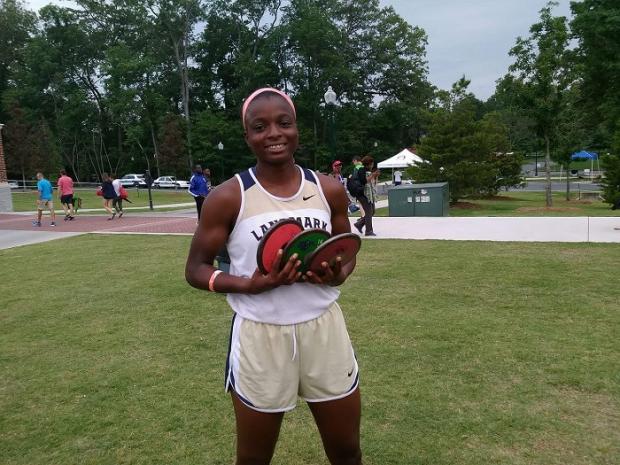 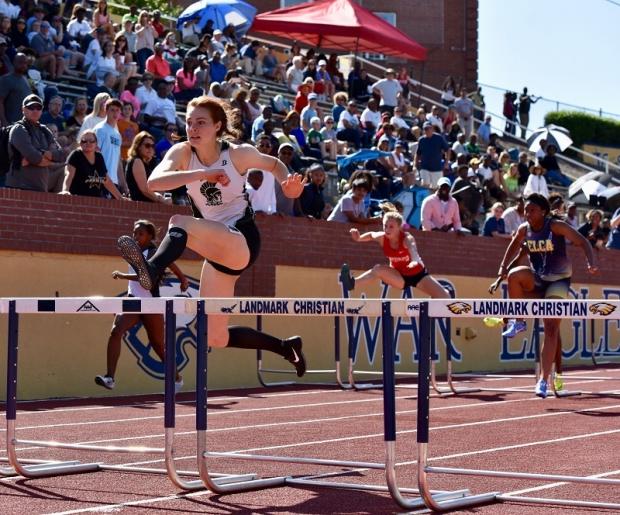 Katie Phillips of Athens Academy
Region 8-A Area 2 meet gave one a good notion of what would happen at Sectionals and State. Based on how schools performed at those meets, its going to come down to Athens Academy and Wesleyan. Athens Academy will be gunning for a 3-peat and is the favorite to achieve that goal. The Sparties bested Wesleyan by 19 points last year, but it may be tighter this weekend. They can get points across the board in distance, sprints, hurdles, relays and jumps. Anna Marian Block leads this squad and is a heavy favorite to win the 800 (recently went 2:09.83 at UGA) and the 1600 and Emily Elder can score in the 3200. Katie Phillips may challenge for Gold in both hurdles events, Jasmine Barrow is the #1 triple jumper, 400m in A and can score in the 200. Acad will score big points in both relays as well. 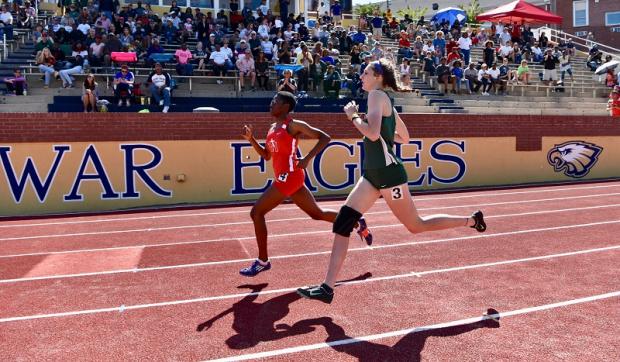 Meagan Lynch of Wesleyan (lane 3)
Wesleyan will need to max out on all scoring opps to take it down to the wire with Athens Academy in the 4x400. The Lady Wolves strengths are sprints, relays and jumps. Megan Lynch has a chance to triple in the 100/200m races and LJ and a key player on both relay squads. They also need to score in the 400m, both hurdles events and discus to keep pace. 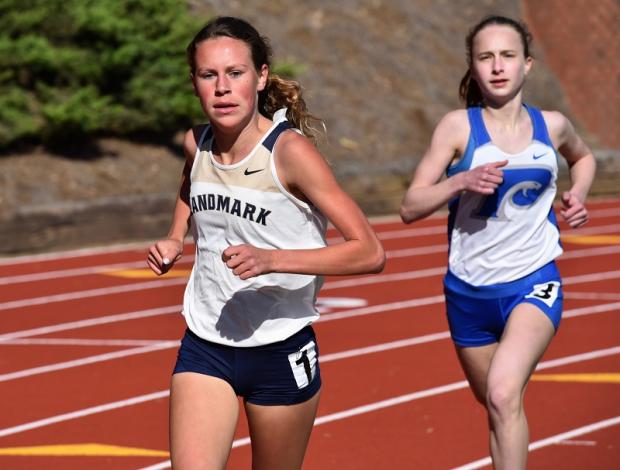 Erin Fegans and Jordan Walter of Paideia
Landmark Christian could push past Wesleyan if they perform well. They are strong in distance (coached by legend Bill Thorn) jumps and throws. Erin Fegans is favored to take the 3200, and score well in the 1600. Lindsay Biggar and Sarah Foreman could pick up 10 points in the 800 and Mary Kellison Thorne can pick up crucial points in the 3200 and Silver in the pole vault. Elizabeth Gibbs is tops in A in the Discus at 140-7 and can score in the TJ and Shot. 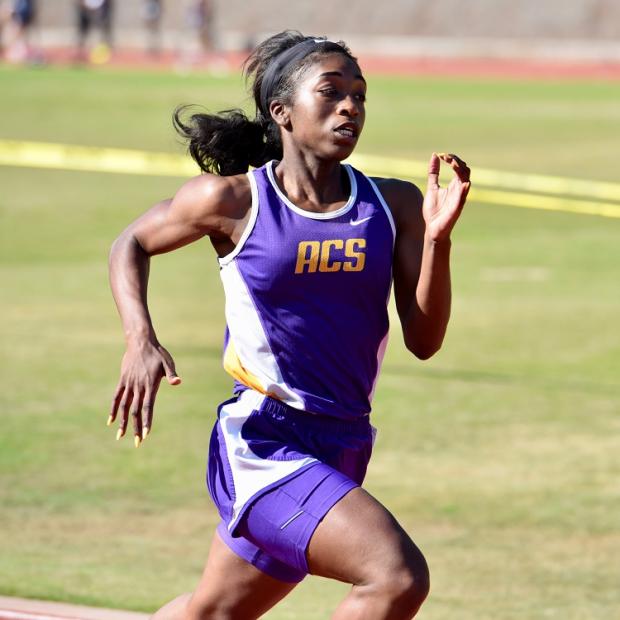 Kristin Stephens of ACS
Athens Christian has resurged under Cayla Cummings guidance and on paper will be the final team to make the Podium. They have speed with Kristin Stephens in the 100/200m, Madison Pickerel will contend in the HJ and Clara Heiss can finish high in the PV and 100h. Kori McDaniel of St. Francis has a pr of 43+ in the Shot and Synclair Savage of North Cobb Christian has a pr of 18-7 in the TJ.
Tweets by GAMilesplit