The International Horse Park provided some great racing in beautiful conditions for a mid September Saturday at the Gwinnett County Cross Country Championships. Mill Creek's young squad easily won the team title scoring 69 points for a victory margin of 43 points, which is quite a feat, considering they only returned 1 top 5 guy from 2016. Their top 5 today, all finished in the first 18 spots, led by the efforts of Joseph Muck and Brian Ricks who finished virtually together in 10th/11th place at 17:11. Brookwood showed they are not to be under estimated, taking runnerup team honors led by Luke McNeil's 9th place finish in 17:02. Grayson's stock is rising, as the Rams bested several traditional Gwinnett powers taking 3rd, led by Sr David Gunn's 8th place effort at 16:58.

The fireworks however, were happening upfront, as Chase Condra of Peachtree Ridge and James Cragin of Archer went at it 'mano a mano' after separating from a strong chase pack. It appears thru photos, the lead switched hands perhaps a few times, with Cragin leading coming down the final straightaway along the white fence. But, Condra surged hard the final meters of the race and hit the mats first clocking the winning time of 16:08.68 to Cragin's 16:08.70 (in a true Finish Lynx photo finish!) The top 5 was rounded out by Myles Collins from Archer at 16:30, Kai Brickey of Collins Hill in 16:36.03 (who overtook Axel Avalos of Central Gwinnet in the final few meters going 16:36.28. 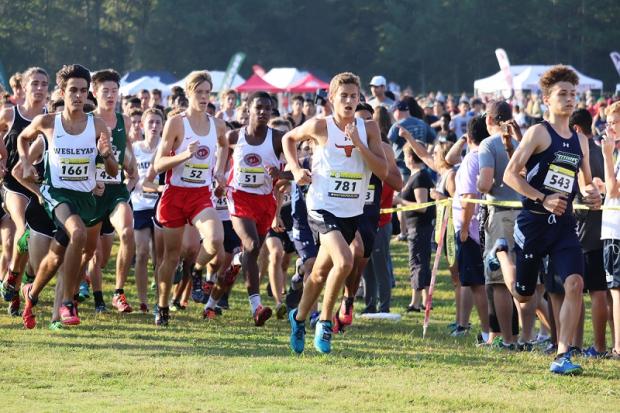 Varsity Boys get the holeshot at the International Horse Park 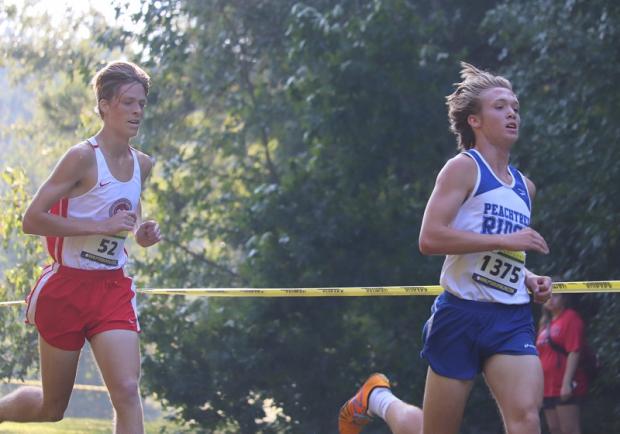 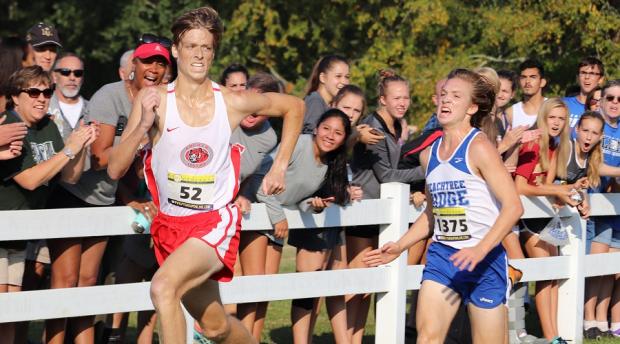 Cragin desparately tries to hold off the hard charging Condra as they approach the finish line.... 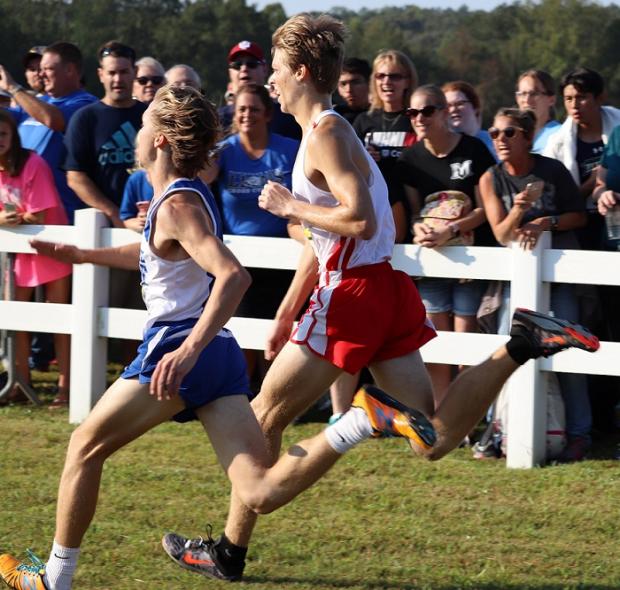 Condra slides ahead just before the mats for the win! 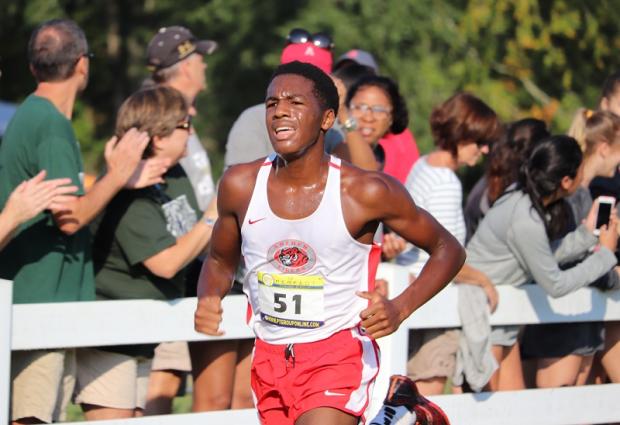 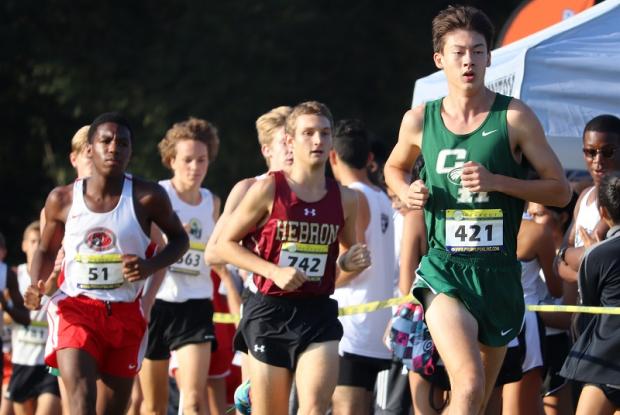 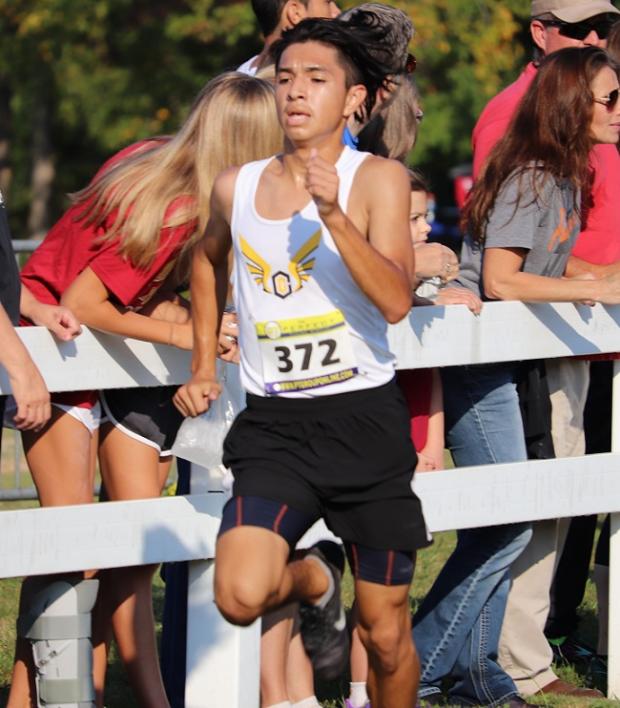 Axel Avalos of Central Gwinnett was a close 5th behind Brickey 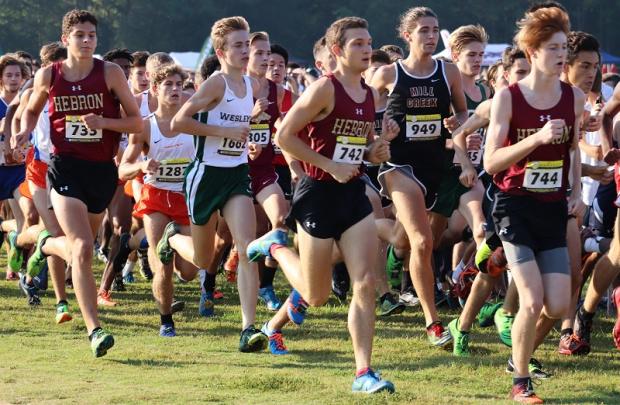 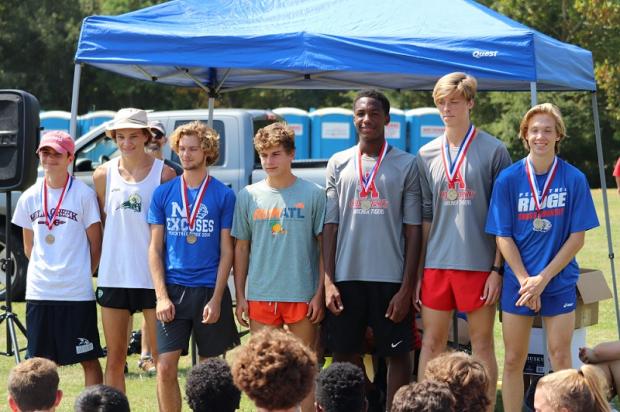 Most of the Varsity Boys top 10 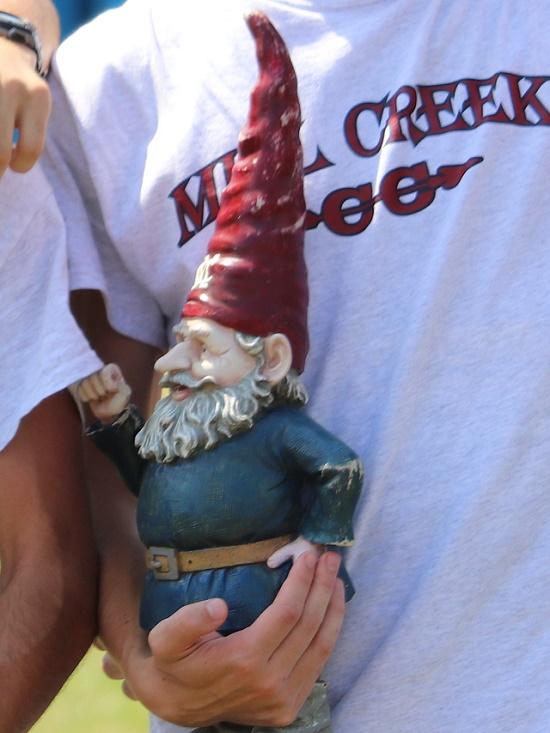 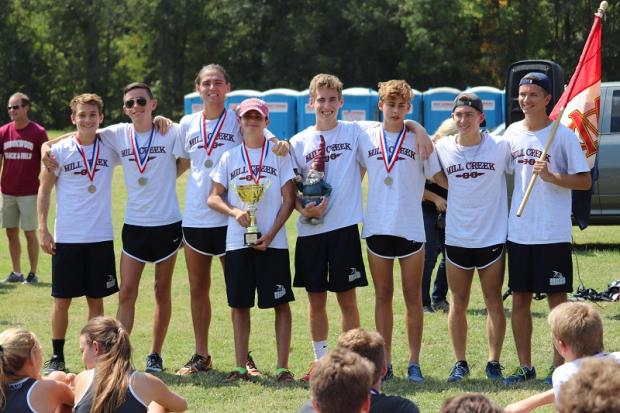 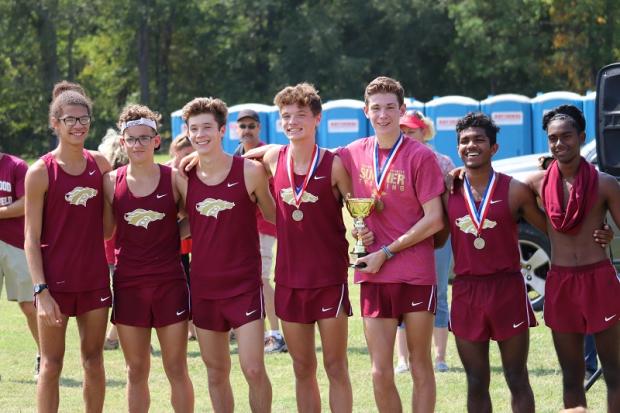 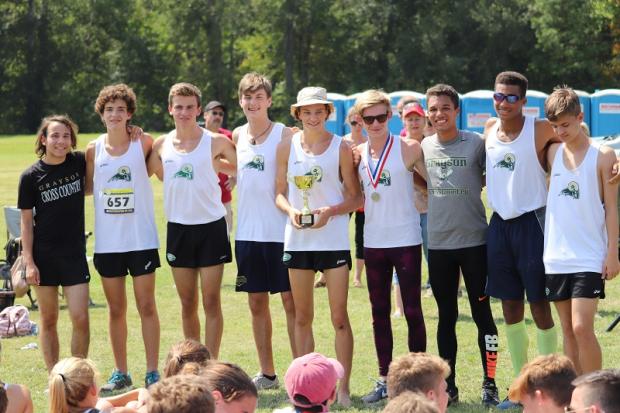 North Gwinnett has always had one of larger programs in Gwinnett County, and their Girls have shown alot of improvement recent seasons, which Saturday paid off in spades as they captured the Varsity Girls team title. Bolstering the Bulldog attack today were: Sarah Melkerson taking 7th in 20:21 and soph Makenna Kulzer back in 8th at 20:35.  Brookwood claimed the 2nd place team hardware led by their top runner Reese Saddler who took 6th Overall in 20:07. The lady Hawks of Mill Creek were 3rd led by Marisa  Petit's 3rd at 19:45 and Camryn Petit's 5th at 20:05. The Individual title was won by Dacula's Skylar English as she added another notch on her belt posting the winning time of 19:12. Mary Kathryn Knott of Peachtree Ridge, hung around English most of the race and motored to 2nd Overall at 19:23. 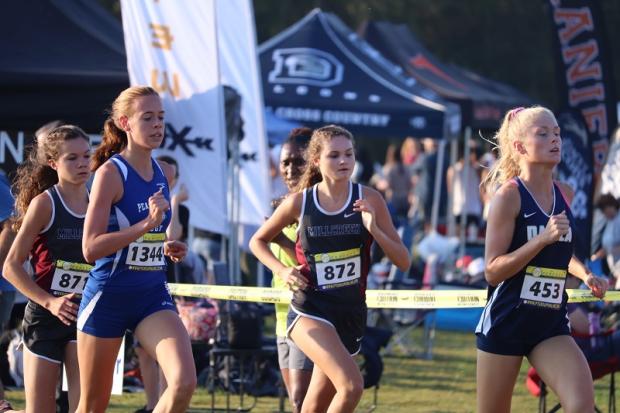 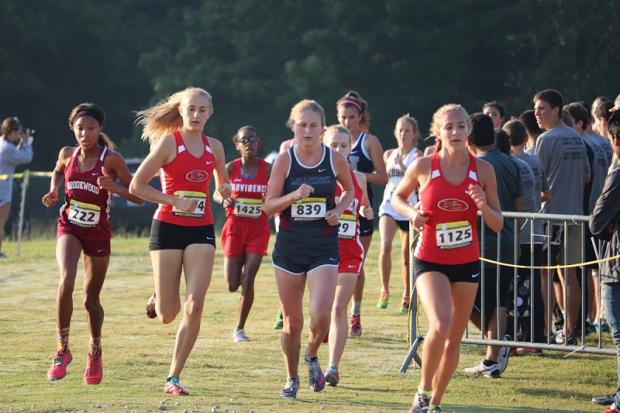 North Gwinnett ran great, winning the team battle, and may move up the Rankings this week... 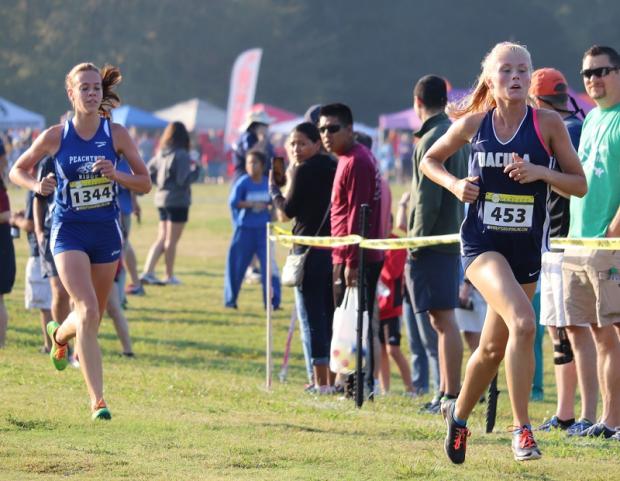 Skylar English of Dacula and Knott begin to separate from the chase pack.. 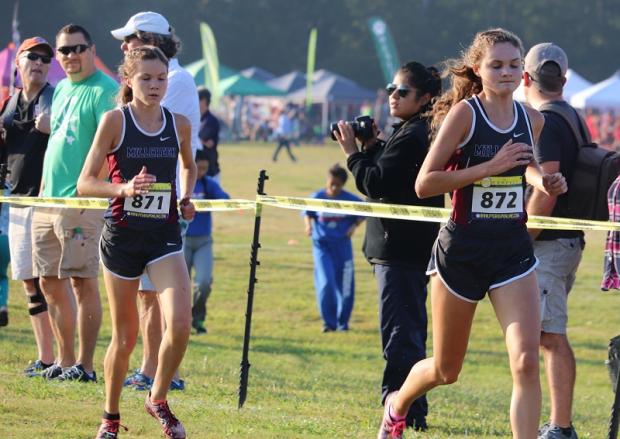 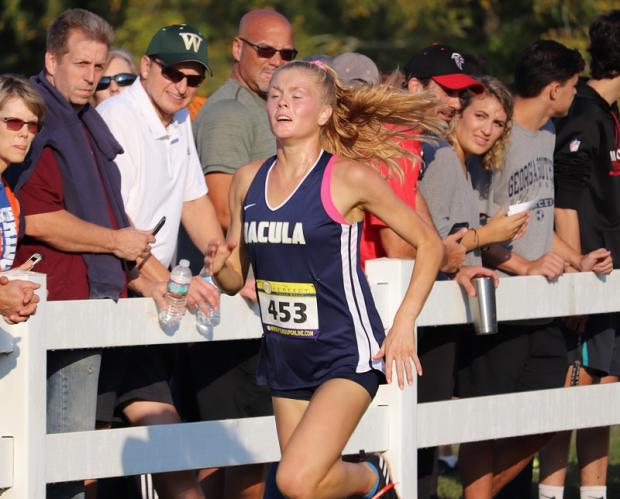 Skylar English from Dacula won her 3rd race this Fall, posting a 19:12. 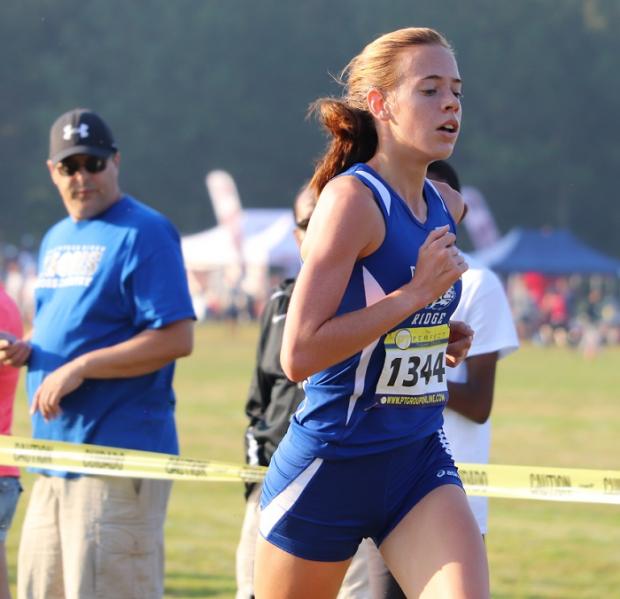 Mary Kathryn Knott led the Ridge to a 4th place team finish, as she was Overall runnerup in 19:23. 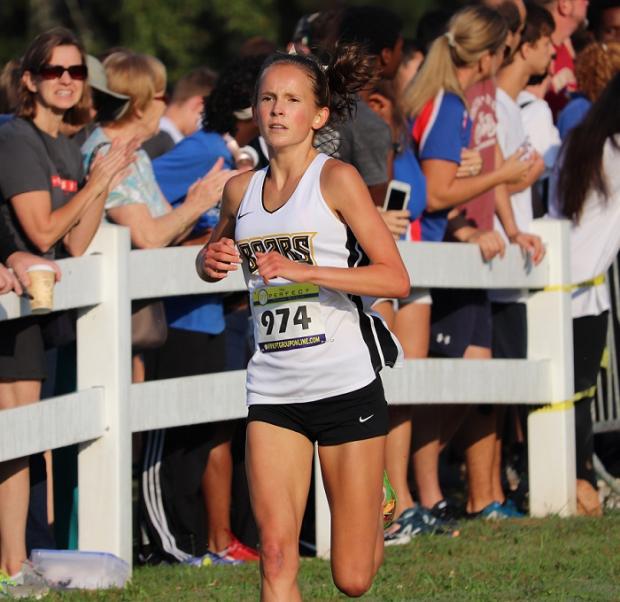 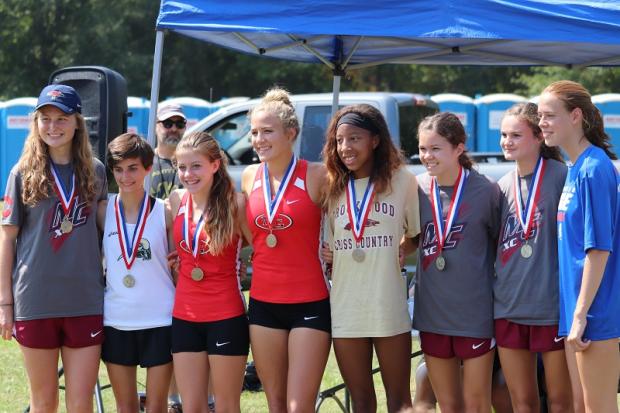 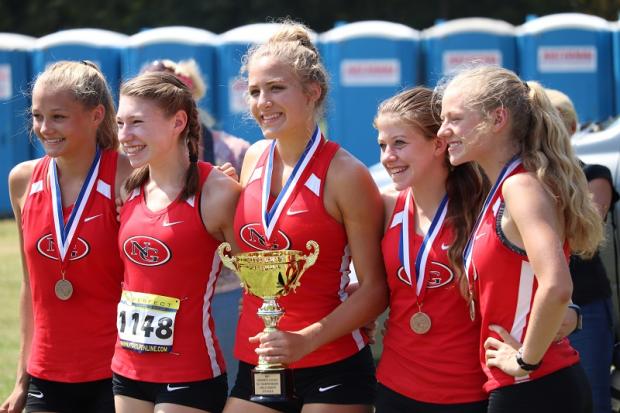 It was North Gwinnett's time to shine this season taking the team title. 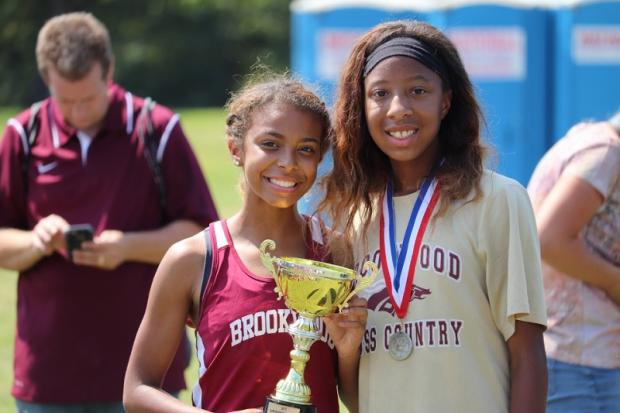 Brookwood's gals were a strong 2nd as a team, only 16 points back. Reese Saddler & team mate grab the hardware. 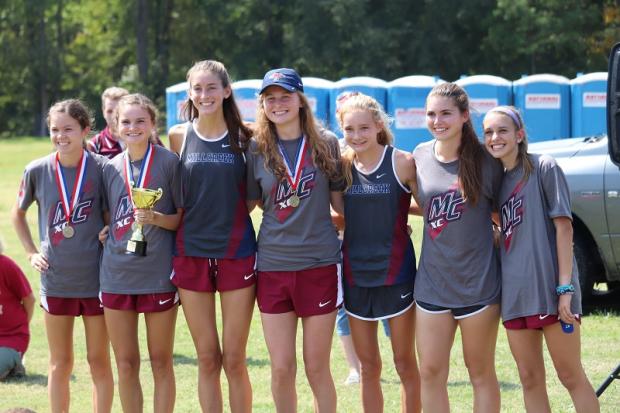