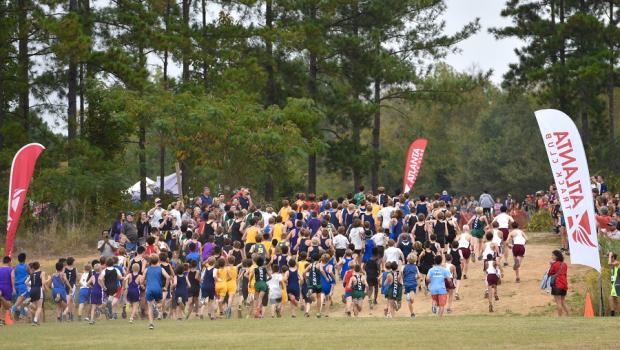 Over 1800 runners tested the Bleckley Elementary course Saturday under conditions from partly cloudy early, to very light sporadic precipitation as 6 new Middle School State team champs were crowned and 5 new Individual Champions were annointed. Bleckley County as always, were great hosts, good folks who know how to put on a festival like atmosphere. The Awards MC made a comment that more people were at the meet today, than actually reside in Cochran, wow! 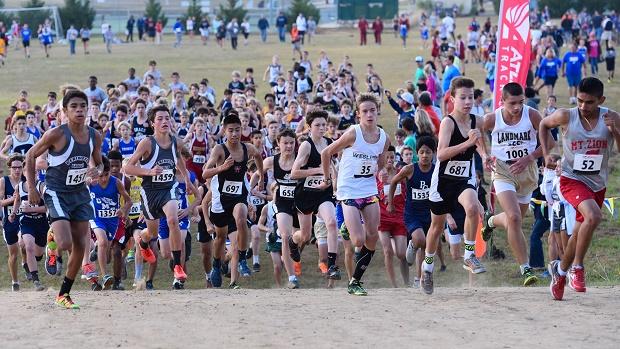 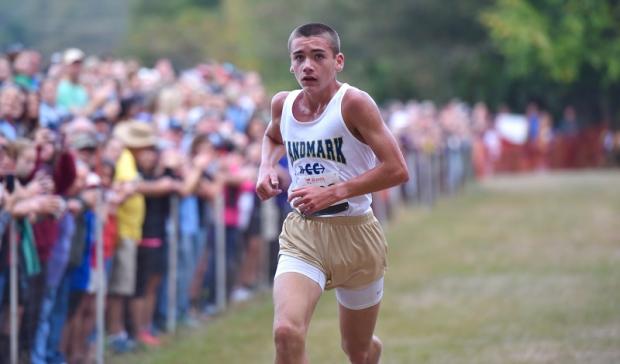 Zack Truitt made it a 'perfect season', going undefeated, capping it off with the MS Boys Best Performance of the Day (photo by Daniel McCauley)

Unbeaten all season, including a HS JV 5K race, Zack 'Attack' Truitt of Landmark Christian (enjoying the best conditions of the day) found his rythym and blew away the field setting a new course/meet record on the 2 Mile layout crossing the finish line at 10:57.24 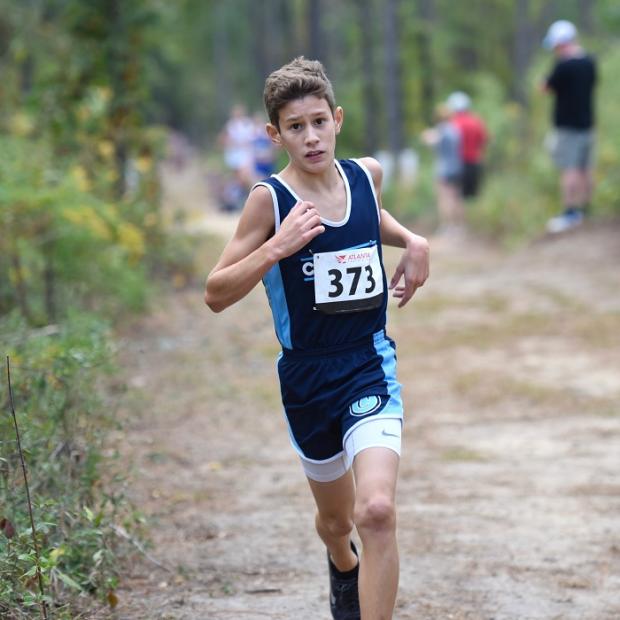 Miguel Schlicht of Cornerstone Christian was individual runnerup clocking a 11:31 and Elijah McCauley of Paideia, chose to peak at just the right time, seizing 3rd place Overall posting a 11:39. Mac Howie of Wesleyan placed 4th in 11:44 (photo by Daniel McCauley) 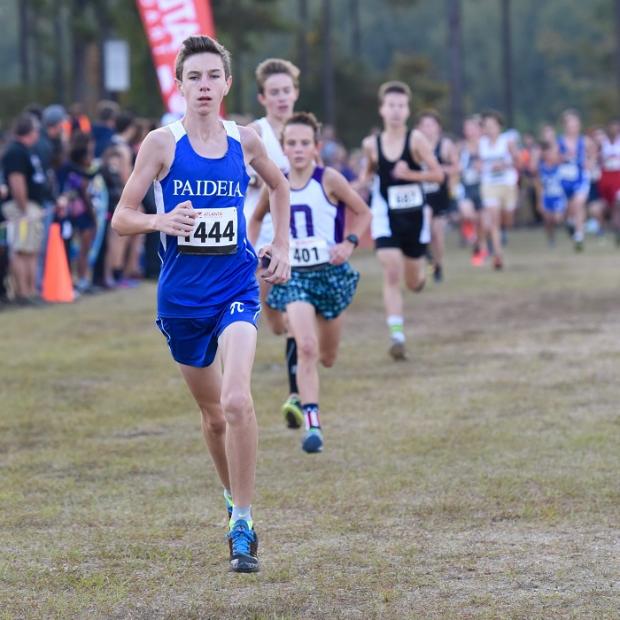 Elijah McCauley took his time, and worked his way up to 3rd overall (photo by Daniel McCauley) 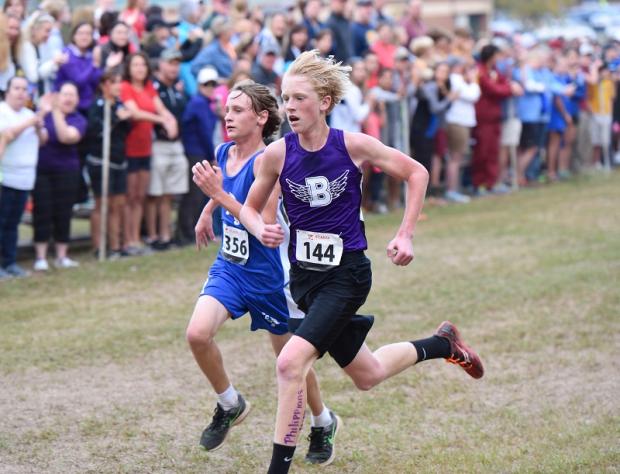 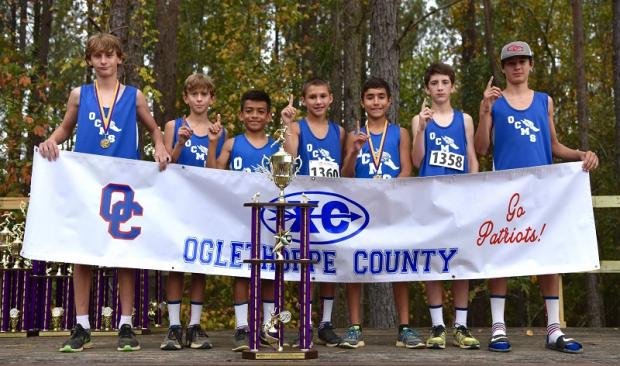 Had to be fun bus ride back home for the Small School Team Champ Oglethorpe Co. (photo by Daniel McCauley)

In a bit of a shocker, it appears the strategy of coming down and racing at the Bleckley Invitational last Thursday, for Oglethorpe County MS paid big dividends as the Pats' seized the day, beating all the private small schools scoring 96 points, for a 7 point margin of victory over Holy Innocents. Leading the charge were 6th grader, Luke McGarity placing 9th in 11:51 and 8th grader Rainey Tompkins 13th in 12:05. 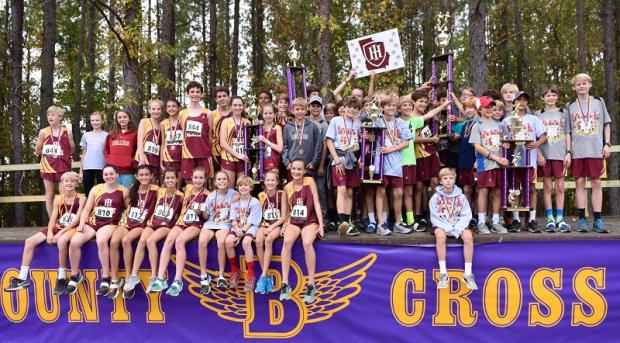 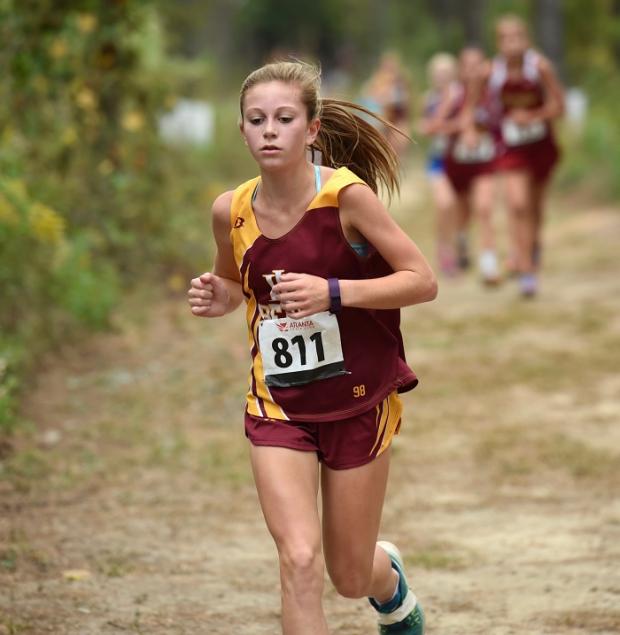 Holy Innocents girls were pushed to the brink in the team race and held on for dear life, as alot of Blue uniforms began racing up the finishing hill, but won by 2 points....whew! Hayden Puett led the hunt for the Golden Bears (who had placed signs with its logo around the finish area) placed 7th Overall in 13:15. 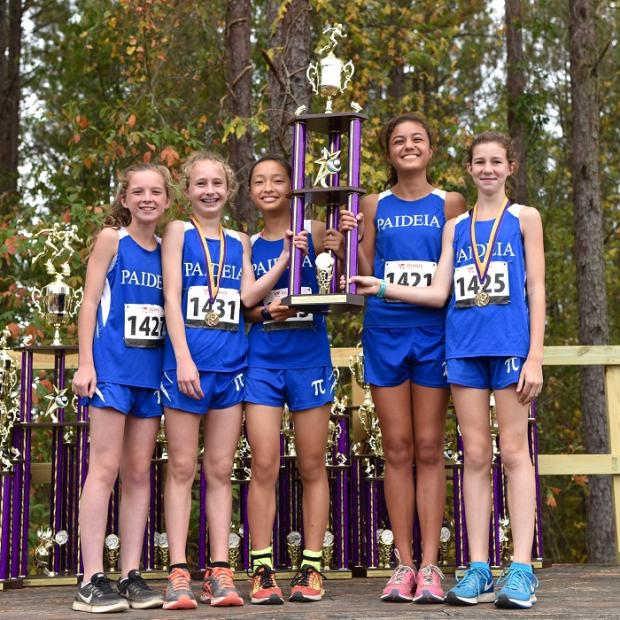 Paideia nearly stole the show though, as the Pythons began striking hard and fast the final 1/4 mile making one wonder how close the battle for 1st had become suddenly. Jordan Walter led the Pythons' attack placing 5th in 13:01, with 7th grader Luna McCauley having a sweet race herself, placing 9th in 13:19. Defending champ Hebron Christian had a strong showing taking home 3rd place hardware led by top 10 finishes by: Brooke Browning 8th (13:15) and Claire McGuirt in 10th (13:19) 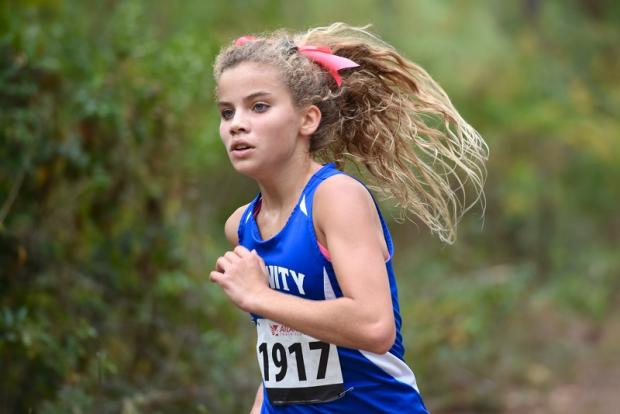 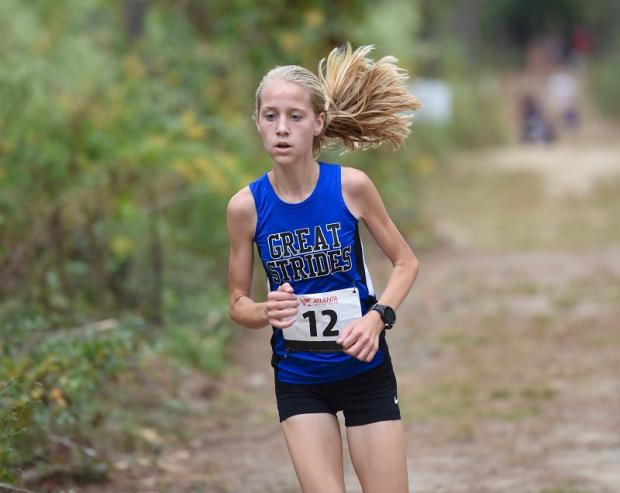 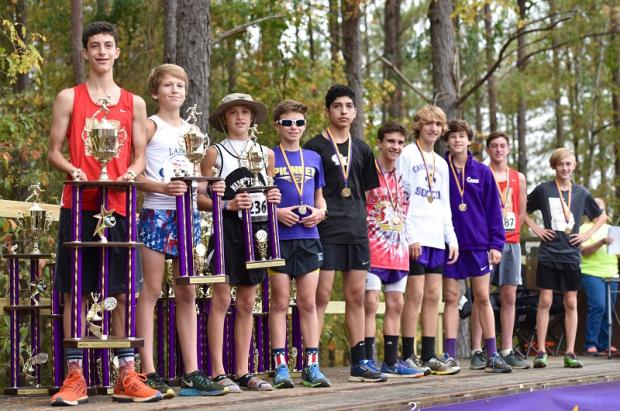 Davis Potts of Malcom Bridge MS, has been dominant in northeast Georgia. It hasn't been without some misfortune on a couple of course markings/rabbit. But Davis was not to be denied down in Cochran, as he pounded the field into submission winning the Medium School Boys Individual title clocking a 10:58.56 (surpassing the old record himself) a scant second slower than Truitt. Too bad, those 2 and the top 2 in the Large School/Small School Boys races weren't in the same race! 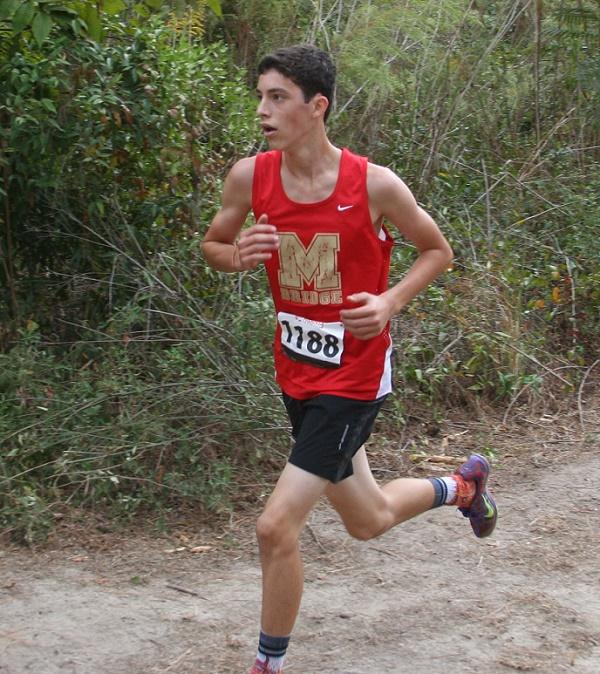 The only runner to stick around with Potts was Andrew Jones from North Hall MS, who hung tough throughout earning a well deserved 2nd place trophy going 11:02. Placing 3rd as an individual was Middle Georgian, Justin Wachtel from Mary Persons MS at 11:09. From the northwest corner of the state, Lane Hollis of NW Whitfield placed 4th overall in 11:16 and Anthony Arredondo of Chapel Hill MS (Douglasville) took 5th at 11:29. 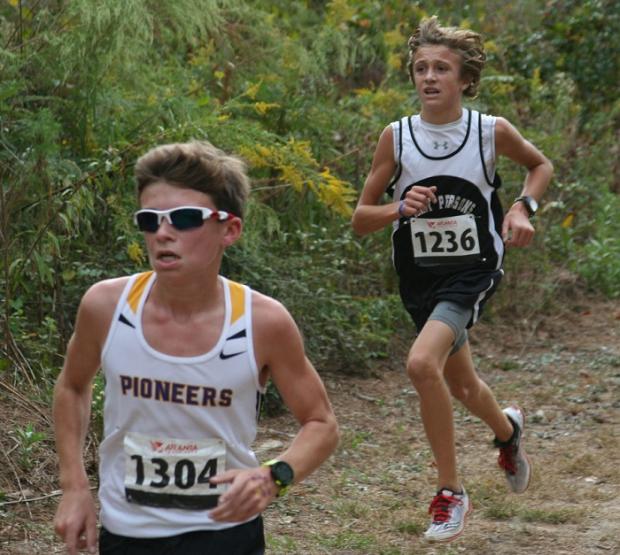 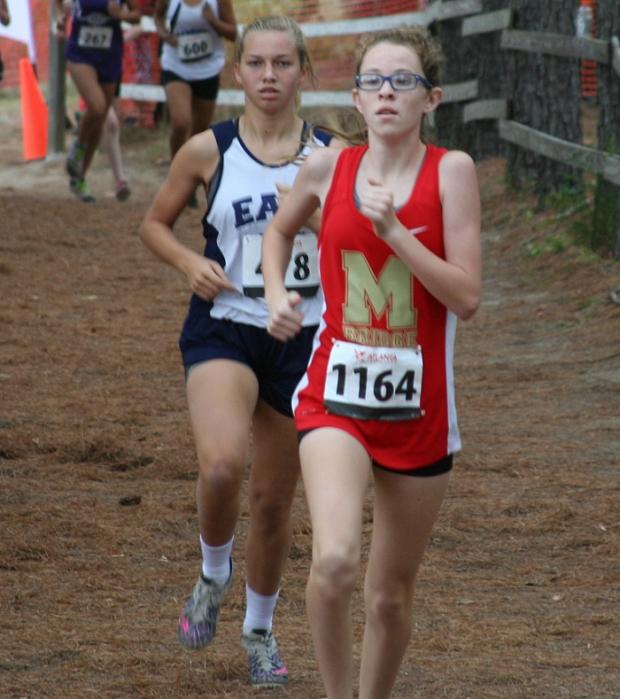 Malcom Bridge made it a sweep of the Medium School Individual titles as Kelsey Morse was hardly challenged, taking the lead and gradually pulling away posting a winning time of 12:32.  7th grader Jewellee Love from East Jacksom churned to 2nd as an individual going 12:54. Caroline Duncan boosted Malcom Bridge's team hopes racing to 3rd place at 12:57. Sarah J Burnette ran unattached an achieved a nice 4th place effort in 13:01, followed by Naomi Coombs from Clear Creek MS taking 5th at 13:08. 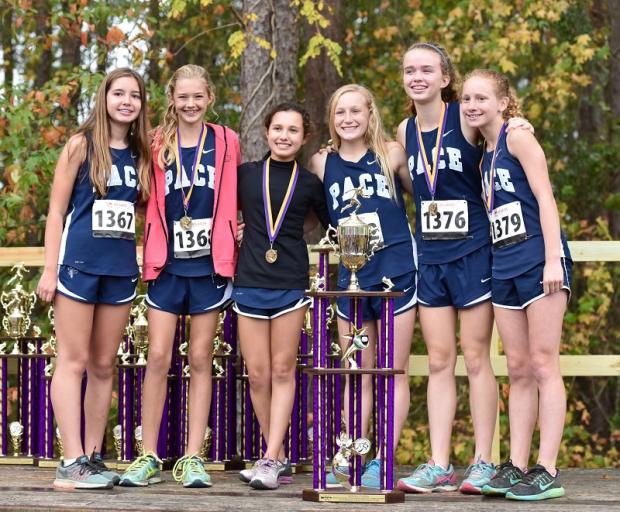 Its been a while.....but Marist's reign of consecutive state MS XC titles was ended by Pace Academy in a very tight the Medium School Girls Championship race. Pace ran lights out scoring 74 points for a 5 point margin of victory over the War Eagles. Laura Romig was the top finisher for Pace placing 9th (13:25) with 6th grader Elizabeth Feagin pitching in with a 13th place effort at 13:48.

Marist was a strong runnerup though, only 5 points back. It will be interesting to watch them develop in HS under Eric Heintz. Top runners for them were: Johna Grisik 8th (13:19), Reagan Kitchin 10th (13:29) and Lily Murray 12th (13:46)  Lovett added more tall hardware for their trip back to ATL scoring 3rd as a team behind Janie Huggins 16th (13:55)  Malcom Bridge was 7 points back in 4th led by Morse and Ducan, followed  closely by an ever improving (and growing) East Jackson MS program led by Love and Lissett Miranda 7th (13:18) 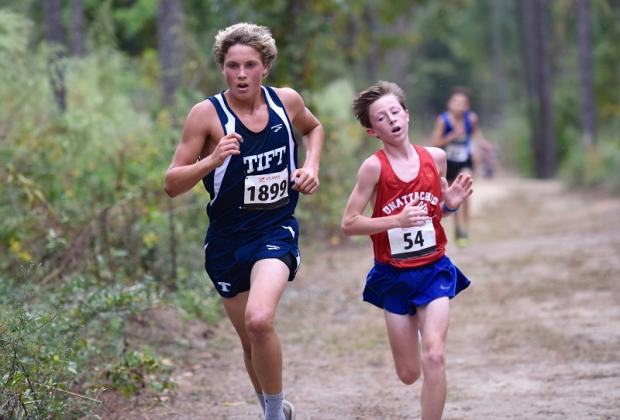 After a 9:34 at Westover and strong race at the Tift Invite, one had to wonder if  south Georgia runner JD Bengston of Tift MS was really that good ?? He proved it wasn't smoke and mirrors, or a short course, winning the Large School Boys Individual title. It was a tight race throughout, and word came back to the finish area it was really going to be close...But JD rounded the final turn first, sprinting up the finishing hill holding off Sully Shelton for the win in 11:10.20  Shelton had a great race and finish as well about 10m back, crossing the line in 11:11.95  Tait Ellingson of E.T. Booth MS  was a strong 3rd at 11:16. Jonathan Greene of Evans MS had a nice race taking 4th overall in 11:35, while rounding out the top 5 was Karthik Kochuparambil of Piney Grove MS going 11:37. 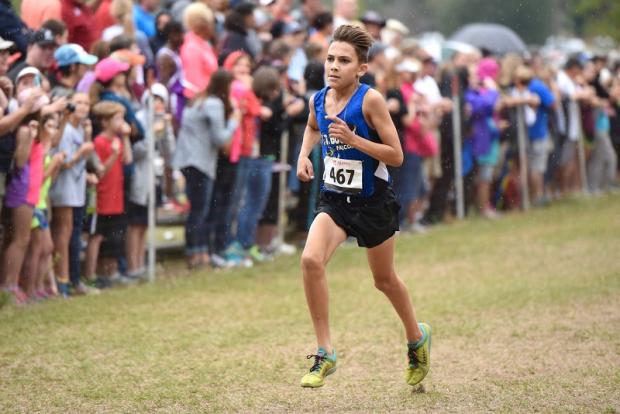 South Forsyth MS must have irked not being given due respect in the meet preview, descending down to Cochran on a mission perhaps.. easily taking the Large School Boys Team Championship by 41 points. It was accomplished by a 12:00 team average and 1-5 split of 1:00...Top runners for Southy were Cooper Boko 12th (11:44), Adam Nicholason 13th (11:44), Lucas Bekele 16th (11:48) and Colin Chapman 18th (11:51). Renfroe MS of Decatur signed up over 140 runners, but their top 5 carved out a 2nd place team finish with 137 points. Eoin McNally was their lead runner taking 6th (11:37) and 6th grader William Carlton 11th (11:43)  Piney Grove MS was just 3 points back securing the 3rd place team bounty. Kochuparambil led the way in 5th, followed by Mark Martin 8th (11:39)  Woodland Middle Euharlee filled in the 4th place team spot 17 points back. 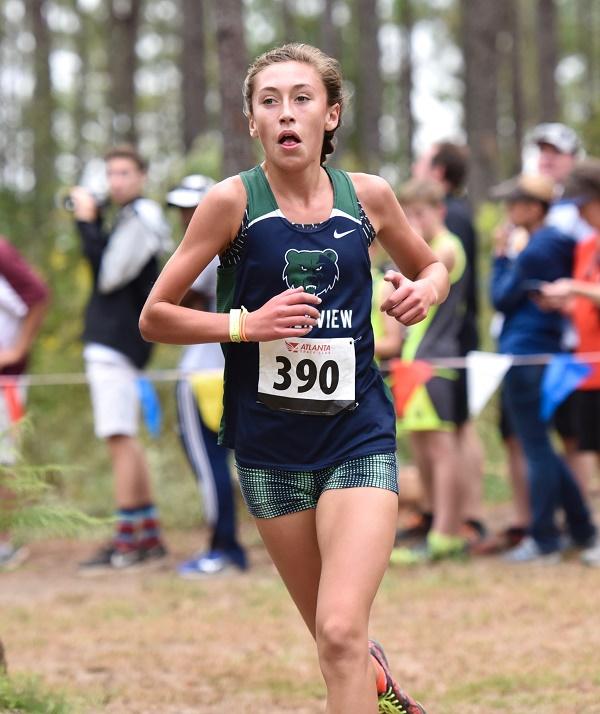 Makena Gates of Creekview set a course record on her way to victory in 11:44.09 (photo by Daniel McCauley)

There is a new Sheriff in town in Middle School Girls XC and Track, and her name is Makena Gates of Creekview. Gates' domination of the Large School Girls Championship was so impressive, she slaughtered the old course/meet record of 11:57 by :13 clocking a 11:44, which would have made her very competitve in any of the Boys races. Only Clara Heppner (Alpha Crush) was able to maintain any semblance of contact with Gates. Heppner was a very definitive 2nd overall with a time of 12:07, which would have easily won the Small and Medium school races. It was a duel of 7th graders for 3rd as Lena Cook from Clarke MS (Athens) barely nipped Woodland Euharlee's Rylee Evans as both were super close to 12:51. Elle Mezzio of Sutton MS rounded out the top 5 individuals at 12:56. 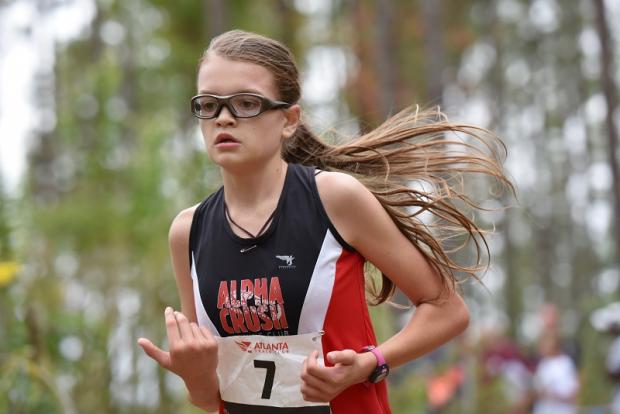 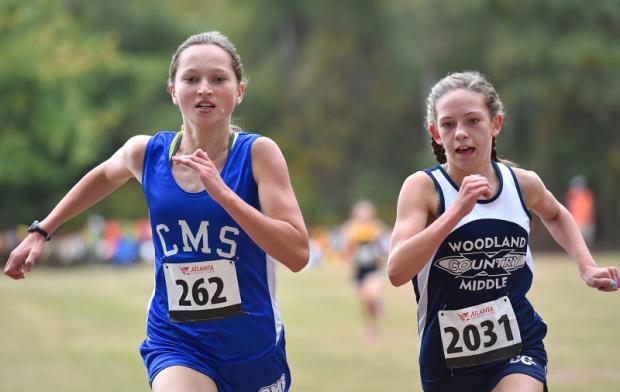 ET Booth MS won the Large School Girls team title with a victory margin of 43 points over defending champ Woodland Euharlee. They did it with a 13:30 team average and 1-5 split of :52. Top runners for Booth were: Meg Lance  6th (13:04) and Avery Brothers 10th (13:18)  Woodland Euharlee competed very well, earning team runnerups led by Evans' 4th place finish. 3 schools were within 3 points of each other to determine the top 4 squads. It took a 6th runner tiebreaker for Lakeside MS (Cumming) to come out 3rd place over Dean Rusk MS. Lakeside's Emma O'Connor led their efforts placing 9th (13:17) Summerour Middle was 3 points back having to settle for 5th. 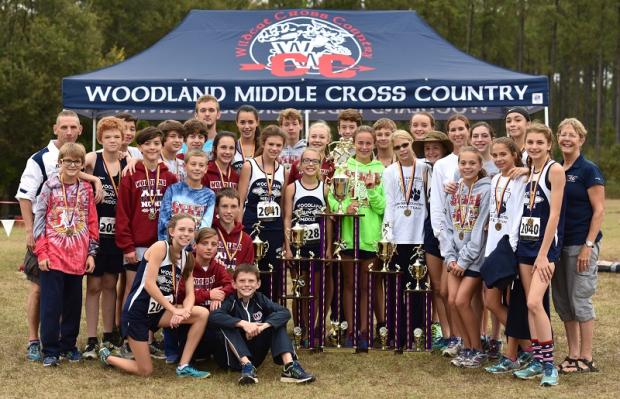