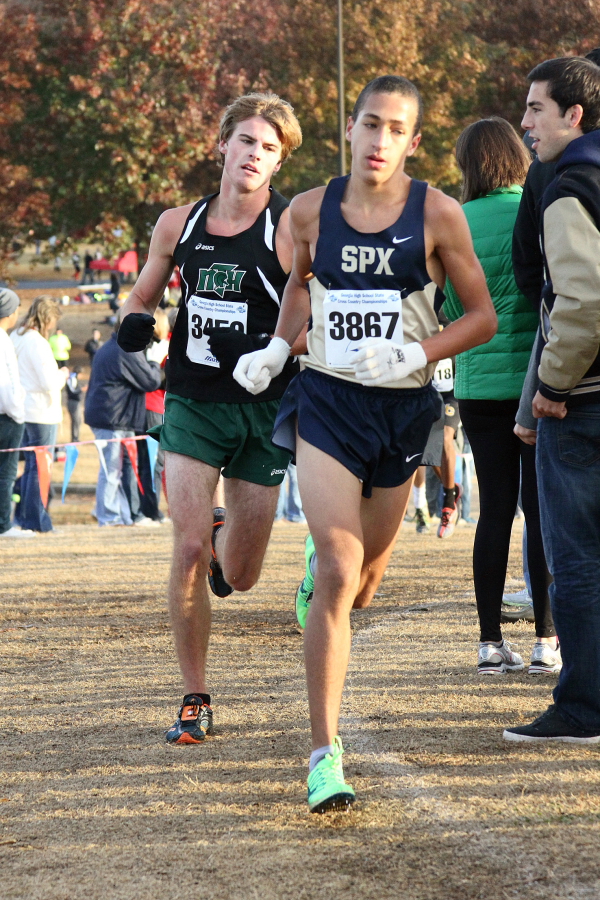 A North Hall Trojan clings to a St.Pius runner on top of a Hill         Image by Jonathan Speights

This was a very intense two team race with two of the best teams all class. Sprague opened it up fast and even dropped the rabbits by the 800. Behind him was a pack of about 10 guys including most of the North Hall and St. Pius scorers. Woodwards pack wasn't far behind at the mile either and North Hall had the early edge as it looked like their 5-7 were in front of Pius' 5th man. By the halfway point Sprague had pulled away, but the pack remained together as it was really turning into a two team race. By the two mle Matt Munns of BT had opened up a gap on the Pius and North Hall runners who were in the middle of an intense two team battle. North Hall may have had a slight edge at this point, but Anastasiades was moving up quickly. 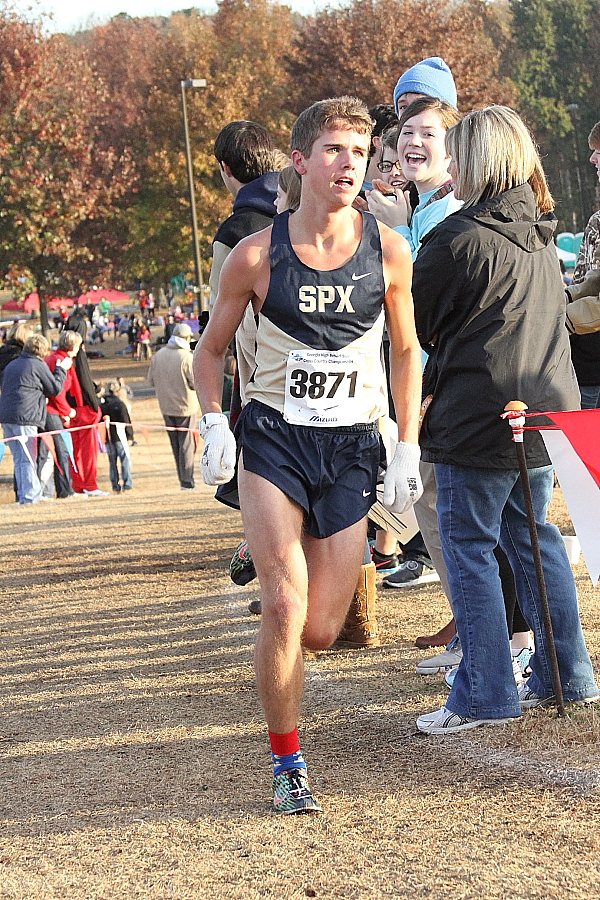 Austin Sprague of St.Pius X churns his way across the firm tundra defending his title in AAA    Image by Jonathan Speights
As they came across the road it was obvious who the winner was going to be as the Lions placed 5 runners in the top 9 including Sprague ftw, Calia in 4th in 16:45,  Stephen Martinez 5th, Joseph Ferrugia, 7th, and Anastasiades 9th and all four were within 7 seconds of each other. North Hall put up a great fight to the line as they placed Quintin Miles who finished 3rd in 16:44, Bryce Schuebert 8th in 16:51 and Zack Hill 10th in 16:54 with two more in the top 13. Can you imagine placing 5 in the top 13 and still losing by 20 points? Great race by the Trojans today who only graduate 2 and will likely be the favorites for next years crown.
Woodward Academy placed 3rd and sorely missed the services of top runner Drew Sands who has struggled with mono this season per reports. Sr River Holifield led the team effort placing 11th in 17:08. Munns' led Blessed Trinity to the final Podium spot as the Titans were a strong 4th. Oconee County had their best state meet in many moons rocking county rival North Oconee by 37 points for 5th place. NOHS nipped much improved 8-A rival East Jackson by 4 points. Dylan Forrester from Dawson County grabbed an All-State spot placing 6th in 16:47.