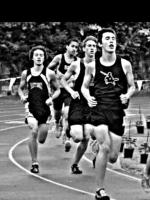 Marist's Pittman Too Strong the Final 300 Meters Winnin...
The AAAA 1600 had some seriously close racing up front and for the next 6 Podium medals. Frank Pittman pulled away the final 300 meters taking the win in the fastest time thus far of the eveving in 4:...

Quintin Miles Signs his NLI with the University of Georgia
Quintin Miles from North Hall HS has signed with the University of Georgia for the upcoming Track and Cross Country season!...
USATF JO Region XC Meet in Pics...
The USATF Junior Olympic Regional Qualifier was held in Myrtle Beach South Carolina last Saturday at the Whispering Pines course. Athletes from the SC USATF Association were not required to qualify to...
USATF GA Jr Olympics State XC Championship in Pics...
11/15/14 Heritage Christian Church was the beautiful venue for the 2014 USATF Georgia Association Junior Olympic Championship.  Over 800 enthusiastic runners participated in this popular event for ev...
4A Boys- St.Pius Boys Golden, Murfee Bleeds Cardinal Re...
This was one of the races everyone in the running community was highly anticipating as 4 of these AAAA squads have been ranked in the top 10 All-Class team rankings including most recently #2 St.Pius ...
North Oconee Boys Edge North Hall, White County Gals Ni...
Some oustanding racing happened in the Region 8-AAAA Cross Country Championships held at Unicoi State Park Thursday. North Oconee&#39;s boys bested North Hall in a pre-state matchup while White County...
Ga.MileSplit Week 10 Boys 'Runners of the Week'...
Kaleb McLeod had some company early in the AAA Boys race in the GISA State Championships but pulled away in Mile 2 posting a 15:30 for the win. It will be interesing to find out if he&#39;s been holdi...