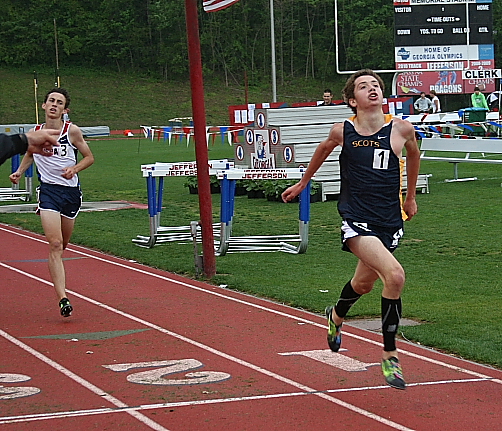 With of course a lite rain falling, Reilly Friedman of Galloway, Shane Sullivan of Mount Pisgah and Paul Orr from Landmark Christian were within a few strides of each other for nearly 6 laps, then Friedman and Sullivan began their dual over the next 800m with Riley maintaining a gap of 2-4 meters to the finish line crossing at 9:38.01 w' Sullivan hot on his heels at 9:38.97  Orr crossed 3rd in 9:48, Joshua Rogers of Pace placed 4th in 9:51 and Curt Krymes of Athens Academy was 5th in 10:03

Marc Brannen from Jenkins County came in seeded 3rd but took the lead in the 1st lap and never looked back churning to a state title clocking a 10:33. Robert Bledsoe from Irwin County went sub 11; placing 2nd, and Commerce's Nahumn Mendozza placed 3rd. 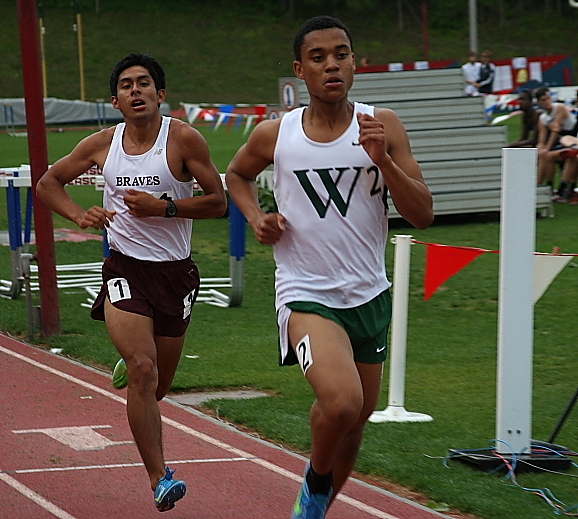 Jordan Flowers holds off Orlando Burgess for the 2A 3200m title in 9:47      Image by  Bruce Taylor ga.milesplit

Jordan Flowers of Westminster had been nipped at the finish line in 2 previous Ga Olympics and this time he was not going to allow history to repeat itself.... Flowers and Orlando Burgess battled the entire race taking the lead during lap 2 after Westminster's Harry O'Connor led lap 1. Burgos took the lead shortly before the bell but Flowers regained it shortly, and held off numerous moves and down the stretch didn't let up till after he crossed the finish line gaining a measure of redemption taking the Gold in 9:47.96 Burgos of Heard County ran extremely well crossing for 2nd at 9:48.64  Damian Porter of Chatooga placed 3rd in 10:07, followed by O'Connor in 10:13.83 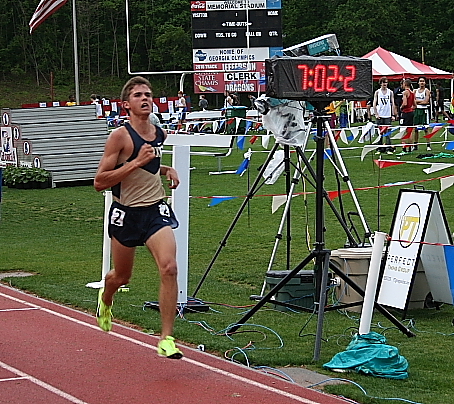 For a while, one had to ponder what St.Pius' Austin Sprague was up to. Taking it out hard and fast on pace close to 9:05 after 4 laps. Sprague continued to run well after even splitting a 1:09 but settled in for an easy win the final 2 laps pushing St.Pius to probably an unsurmountable margin clocking a 9:24.57  The chase pack closed the gap the final 800 with North Hall's Witt Nix charging down the homestretch finishing 2nd in 9:30 just ahead of Pius' Andrew Anastasiades in 9:31 with Matt Munns of Blessed Trinity placing 4th at 9:36 and North Oconee's Cole Thornton 5th in 9:46 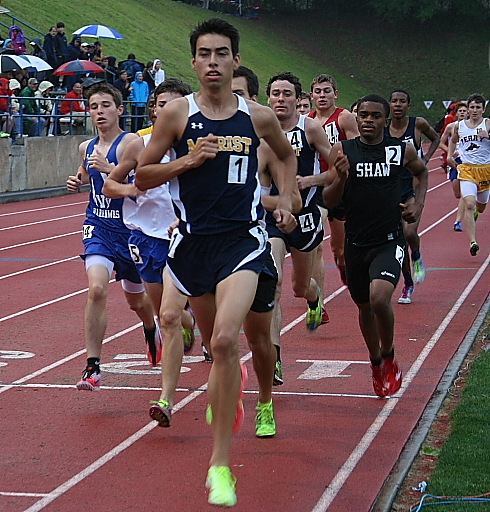 Marist's Daniel Navarro ran a masterful race in winning the 4A 3200m title at 9:21    Image by  Bruce Taylor ga.milesplit

Daniel Navarro ran a brilliant race from the start in winning the 4A title clocking the top time of the day thus far at 9:21  Daniel Broadhead of Wayne County and Hakeem Mustafa stayed in touch, but Navarro's quick turnover and long strides helped him pull away the final lap and complete his distance double. Shaw's Mustafa made a late charge overtaking Broadhead seizing a Silver medal in 9:29.08 w/ Broadhead placing 3rd in 9:34.14 and Jack Leahy of Marist cashing in 5 more team points placing 4th in 9:37.12 barely edging Sam Bowie of Lagrange 9:37.38 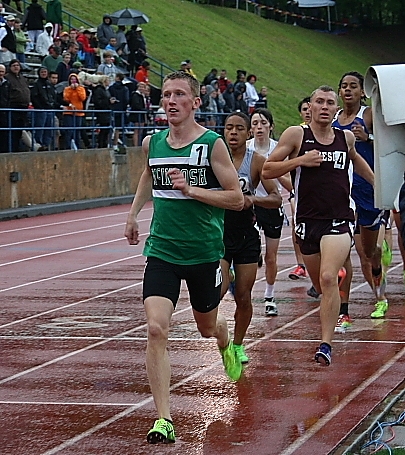 Sidney Speir's (McIntosh) strategy worked, taking it out early for the 5A 3200m crown in 9:30   Image by  Bruce Taylor ga.milesplit

McIntosh's Sidney Speir must have felt a little at home with the conditions taking the lead shortly before lap 2, then motoring steadily away from a competitive field, feeling 'Minnesota' , maintaining enough separation beginning the final lap taking a GHSA state title clocking a 9:30.26 A pack of runners crossed the line soon after led by Logan Poteet of Kell at 9:33.69, Christian Bowles of Lakeside-Evans 9:34 and Josiah Jenkins of Cedar Shoals 9:35 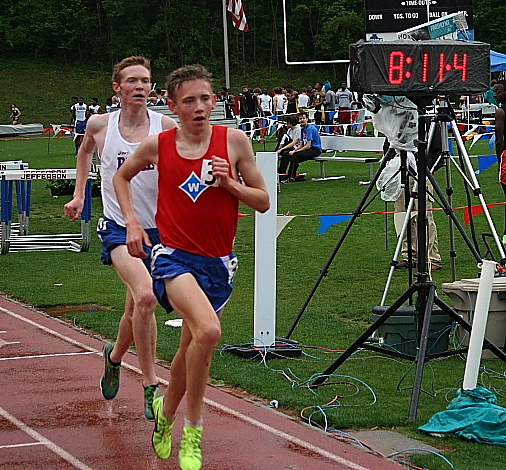 Walton's Keenan Farmer rises to the challenge winning the 6A 3200m title in 9:11     Image by  Bruce Taylor ga.milesplit

This was the race everyone came to watch, as 6A took the track. Josh Brickell had to be considered a pre-race fave, but after the energy he spent in the 1600m Thursday nite, taking it out and making the field run.... The race was very pedestrian the first 5 laps with Brickell taking the the lead as Walton's Kenan Farmer settled in behind him until the bell was rung and Farmer slid around Josh and looking very relaxed putting in another gear... Brickell put the pedal to the floor on the backstretch staying in touch, but the final 110m was all Farmer as he jetted down the homestretch earning  the top performance of the day at 9:11.38, with Brickell placing 2nd in 9:15, Kevin Mills of Peachtree Ridge placed 3rd in 9:22 followed by Jonathan Moses of Collins Hill at 9:27