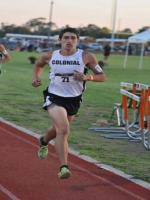 Scouting Report: Colonial Boys...
The Colonial High School boy&#39;s cross country team is coming off a state championship in 2011. The Grenadiers brought home the first team championship in any sport in the school&#39;s history. Juni...

Salute To Seniors: Cody Decker - Colonial...
It was a great 2011-2012 in both cross country and track across the Sunshine State. Many of our seniors will soon be on their way to start their college careers both athletically and academically so w...

4A Boys Race Summary...
Colonial does it! They achieve their mission of winning the school&#39;s first ever team title in any sport. Andres Arroyo led the Grenadiers with an individual championship of his own....