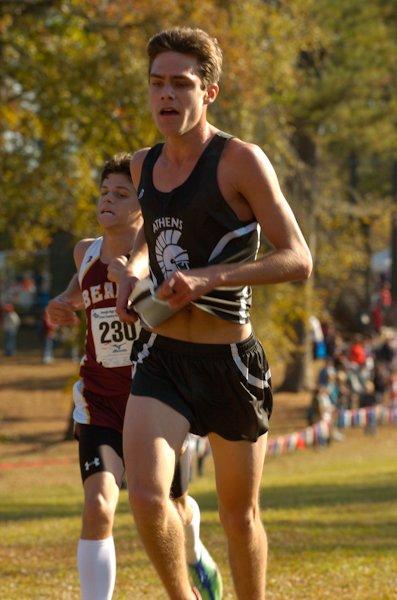 Kurt Crymes was a key factor in the Spartan's journey to their 1st State Team Title in School History. Image by Pinion Photography

The Athens Academy boys took home their first ever Team State title this Saturday at the Class A Cross Country Championships held down in Macon. The Spartans had been the favorite since the Week 2 team rankings were released and won by a 48 point margin of victory over runnerup Darlington. Athens Academy placed 2 runners on the All-State team including senior Henry Dwyer as he led the charge with his 4th place overall finish in 16:34 and Kurt Crymes 7th place finish overall in 16:39 Adam Hearn placed 20th clocking a 17:39  A 10 point split separated the 2-4 Podium teams in what made for a very close race. Darlington came out on top though. The men in purple did not place an athlete in the top 10, but ran well as a team placing 3 in the top 21 (team scorers) led by the 15th place overall effort of Avery Cypress in 17:09  Landmark Christian showed great improvement the final weeks of the regular season and peaked at State placing 3rd 5 points behind Darlington. Paul Orr finished 9th overall in 16:44 to lead the Eagles to their 1st podium finish since their 2006 runnerup finish. Mount Pisgah had a great race seizing the final Podium spot 5 more points back with 135 points. Shane Sullivan was the catalyst as he was 10th overall in the individual race clocking a 16:46 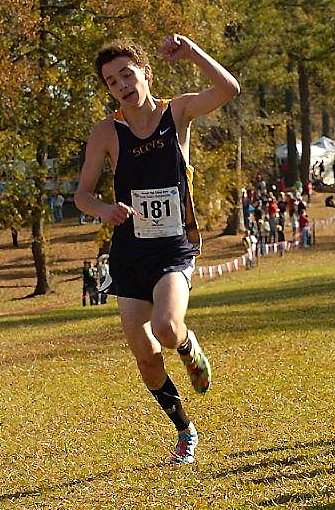 Reilly Friedman of Galloway (soph) was not to be denied of his title and he cruised to his first of what could be many Individual Championships clocking an impressive 15:50 winning by 35 seconds leading the Scots to a 5th place team finish. Joey Carr of Mount Paran Christian had an outstanding race earning individual runnerup honors turning in a 16:24 just edging Our Lady of Mercy ace John Raville a few meters back in 16:26. Also making the All-State squad were Robby Keough placing 5th in 16:35 for Whitefield Academy, Morgan McNeill of George Walton placing 6th in 16:38 and Warner Ray of Holy Innocents placing 8th in 16:40 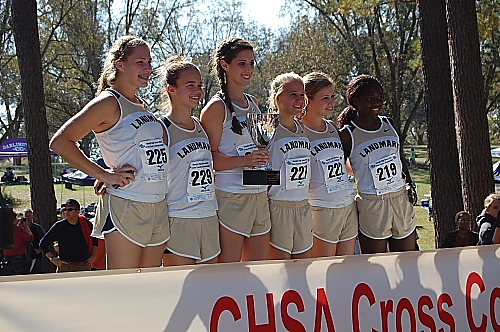 Landmark Christian is 'Queen of the Hill' again in A Girls Cross Country defending their 2011 title behind the amazing duo of freshman Kathryn Foreman and senior Lindy Long. Its a difficult mountain to climb when a team's top 2 score 3 points and they claim 4 of the top 17 scoring positions which is exactly what Bill Thorne's Lady Eagles did Saturday winning by 33 points over a Providence Christian squad that ran quite well taking the 2nd Podium spot. Providence took 3 of the top 10 scoring spots which was key in besting a tough Darlington squad 11 points back. Earning All-State Honors for the Storm was Tayler Tuttle as she pressed Long from Landmark placing 3rd overall in 18:46 Darlington ran well as a team again finishing a strong 3rd placing 3 girls in the top 23 led by Kinslee Clevenger's 10th place All-State effort in 20:25  the battle for the 4th and last Podium spot was extreme to say the least as Mount Pisgah squeaked out a 1 point deficit over Pace Academy. Katie Strawinski led the Lady Patriots with an 8th place overall finish in 20:12  Host school First Presbyterian Day was 3 points in 6th. It must have been difficult for Grace Tinkey to watch her teamates come so close to making the Podium... 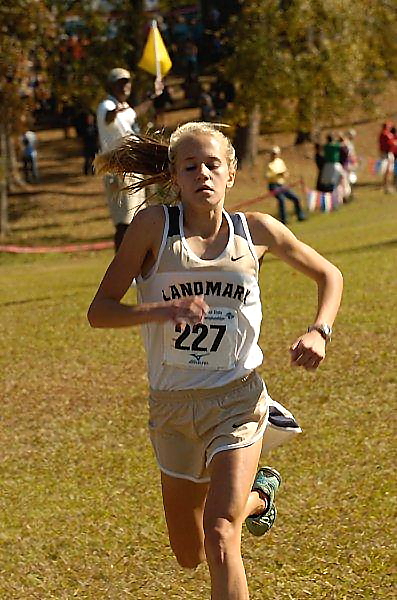 Kathryn Foreman of Landmark Christian was too fast for the Field capturing her 1st GHSA Individual Title. Image by Pinion Photography

Other ladies making the 1A Private All-State squad (not mentioned above) were Stephanie Murphy from Hebron Christian as she had a fantastic race placing 4th in 19:38, Area 1 champ Shannon Fair or Aquinas as she placed 5th in 19:42, Jessica Zalzman of Pinecrest Academy placing 6th in 20:06, Breck Jones of North Cobb Christian placing 7th in 20:09 and Caroline Henry of the Galloway Lady Scots placing 9th in 20:24