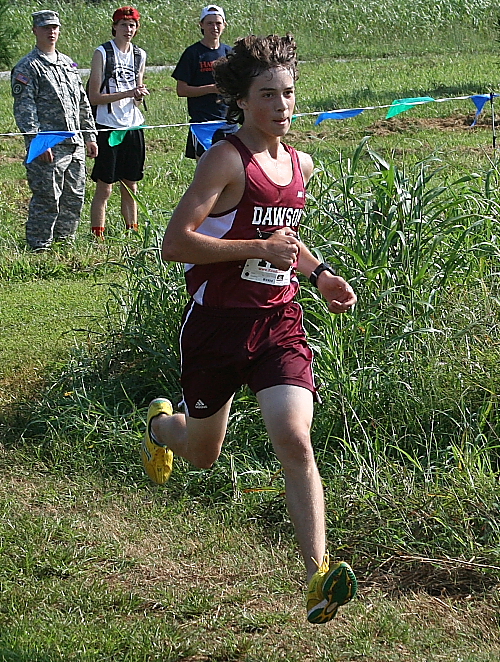 The Berry Clara Bowl Invite once again robbed most of the attention this weekend with over 2000 runners and many ranked teams.  Here are some briefs on the 4 Major HS meets held this past weekend....

3 Georgia schools battled for the Team honors and Mill Creek took a hard fought close win over Marietta by 4 points. The Hawks had 3 runners under 17: including Matt Tippins (16:24), Eric Westog (16:33)  and Sven Hope (16:52) Marietta was paced by Ben Pleak's individual runnerup finish of 15:59.  Pleak ran took the lead after the 1 mi only to be reeled in. he kept pressure on St Pius' Sprague only to be out kicked in the end. St.Pius X placed 3rd led by Overall Champion Austin Sprague who clocked a 15:53. Brad Hort of McIntosh placed 3rd in 16:06. Walton's Girls made a statement dominating the race scoring 77 points led by the top 10 finish of Alexa Womack in 19:24. They also packed in 3 runners from 11-17 spots including Sara Hardin, Christina Grecco and Avery Bussjager. Harrison was 2nd overall in the team standings with 144 points led by Elyse Bray. Dunwoody placed 3rd led by Alex Cameron's 4th place finish in 19:16.Morgan Ainslie of Lassiter was the Overall Individual Champ in 19:06  Ainslie stayed in main pack for the whole race, made a move in the 3rd mile to break up the pack which inlcuded Womack from Walton, Dunwoody's Alex Cameron, Alpharetta's Thorne., Individual runnerup was Brentwood Academy's (Tn) Allison Cheeseman at 19:13 and East Paulding's Lily Kidane at 19:16.

The Boys small school race was a duel between North Hall and Chiles (Fla) North Hall prevailed possibly pushing them ahead of St.Pius this  week scoring 61 points with a team avg. of 17:16. The key was taking the 3,4,5 places individually led by Witt Nix (16:45) Bryce Schubert (16:48) and Zack Hill (16:51). Chiles was led by the 10th place effort of Sean Turner in 17:08. Westminster took 3rd in the team scoring at 155 points led by defending AA Champ Jordan Flowers at 17:07. In a battle of A rivals Reilly Friedman of Galloway won the Individual race in 16:20 over Mount Paran's Joey Carr at 16:34. The Girls race was only missing Blessed Trinity to not make it a preview for the State meet in November with St.Pius X taking the team title with 97 points led by Devon Dabney's 7th place finish in 21:02. White County had a strong race led by Individual Champ Jenna Gearing who clocked a 19:40 for the win. North Hall took 3rd led by Victoria Rogers 21:03 8th place effort. Jessica Zalzman of Pinecrest Academy placed 2nd overall in 20:11 with Chiles' Sara Lane 3rd in 20:13.

At Garrard Park this Saturday Peachtree Ridge and Milton threw down for 6A supremacy with the Ridge just outlasting them by 3 points. The key to their win was the 1-2 finish of teamates Josh Brickell as the Foot Locker finalist added another notch to his belt taking the Individual title in 15:48 and Kevin Mills turned in a nice run at 16:30. Milton fought hard with their 3, 5 runners besting the winning Lions...Milton was led by Nathan Riech's 3rd place effort at 16:48 and Myles Dayoub placing 6th in 17:21. Lakeside-Evans placed 3rd led by the duo of Chase Fowers in 4th (16:55) and Christian Bowles 5th (17:05) On the Girls side Peachtree Ridge and Milton went at it again with the Lady Lions coming out of the fray victorious with a 5 point win...They did it with a total team effort claiming 10,11,12,16 and 19 team postions led by Laurel Wilson's 20:17. Annie Kelly led Milton winning the Individual title in 19:07. Allie Buchalski of John's Creek was 2nd behind Kelly in 19:23 nipping Lambert's Leanne Zimmer in 19:24. Savannah Carnahan of South Forsyth placed 4th in 19:34 followed by Sarah Bowles of Lakeside-Evans in 5th at 19:45  Roswell placed 3rd in the team standings led by Peyton Thomas' 19:58.

The 2nd Annual Mountain Eagle Invite grew to 21 schools competing this Saturday with many of the NE Ga area teams in attendance. The first race began at 10am and the heat definitely played a big factor in the times and spread out the field a bit. Dylan Forester of Dawson County took the race out early and had around a :25 second lead at the halfway point and held on for the victory in 17:48 as Ross Morris of Hart County had began closing on him the 2nd loop finishing in 18:01 as Individual runnerup. Morgan Bishoff of Athens Christian hung tough for 3rd place in 18:11 with Lakeview Academy's Dustin Snyder 4th in 18:20. Hart County took a narrow (slight upset) in the team race over 5A Winder-Barrow by 3 points..WB had 2 runners in the top 10 led by William Wright's 7th place effort. Mountain View placed 3rd with ACS in 4th.

In an extremely close race for team honors, Union Grove ran to victory for the Varsity Boys title scoring 100 points led in large part by Individual Champ Brandon Cromer as he turned in a 16:10 on the new Peachtree Community Course. Host Starrs Mill took a narrow 2nd place margin over Hillgrove by 3 points led by Joshua Warren's 6th place 16:43. Hillgrove's success was a product of tight pack running taking the 13-16 spots with a :07 Split between them led by Brent Sparks in 16:58.Shiloh had 2 runners in the lead pack end up taking 2nd and 3rd individually with Brian Kamau's 16:18 and teamate Nahom Solomon at 16:27. Adel Yoonis of Wheeler took 4th in 16:30 barely edging OLM's John Raville placing 5th overall in 16:31.

Kathryn Foreman of Landmark Christian poured it on in the Varsity Girls race with a sizzling 18:26 on the new layout. It was a nice duel for the runnerup spot between Emily Dunn of Allatoona and Hailey Gollnick of Northgate with Dunn just ahead at the finish in 19:23 and Gollnick 19:26 We can't fully report on the Varsity Girls Team outcome as some scoring issues are being worked out currently and upon revision results will be posted and brief summarized.