Loading
The 1A Boys Division 2 race came down to a 6th man tiebreaker!

Who would have thought that the most nail biting team race of arguably one of the most epic state State Championship weekends of all time, would happen in "tiny yet mighty" 1A Division II Boys? I am talking about the thriller between Atkinson County (ATCO as they like to call themselves) and Georgia Military College Prep (GMC.) The only race this past weekend that went down to a 6th man tiebreaker to determine a winner. As one prominent Georgia cross country coach told me at the summit of Carrollton's central hill, "1A Division II really is the most unpredictable classification." While this race had a very intense team battle, we have to talk about the individual race as well. Lots of ATCO and GMC singlets in the pack early and often. All Photos by Alex Brust

Donning his green and gold race kit and taking the race out from the start, Aquinas Irishman, Diego Pryor was all business at Carrollton. Other than a brief company from Wilcox County's Christian Baldridge, Pryor took full control of that first lap and maintained an early lead in true "Steve Prefontaine-esque" form. Following Pryor after the first "Separation Slope" ascent was Atlanta Classical Academy's Liam Corbally in second place, followed by a whole group of other individuals.

By the time that Pryor reached the second climb up the central hill, he had already created about a ten second plus lead. His fellow teammate, Eli Walker, took over second place with Joe Meier of Georgia Military College following Walker closely. By this point of the race, there were a few Atkinson County and Georgia Military College runners in the mix to finish in the top ten. The team battle was heating up. Anytime you saw an Atkinson County runner, there was a Georgia Military College runner right there with them. It did not help matters that both teams have almost identical racing kits. It was very difficult to tell who was winning in the barrage of red singlets with white lettering. 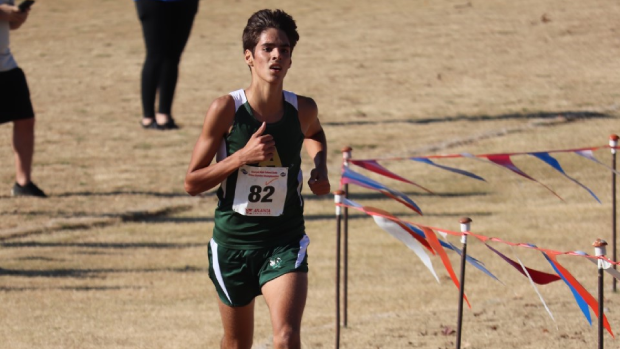 Pryor got the win. Meier from GMC in 2nd place

After one final run up "Separation Slope," Pryor made his downhill descent from the central hill toward the finish line to win his first ever cross country state championship. He won in 18:36.00 and won by 12.50 seconds. Pryor described the win as a "surprise;" however, he was very happy with the win. Following Pryor was Joe Meier of Georgia Military College taking the runner-up honors and Pryor's teammate, Eli Walker finishing in third place.

The ATCO vs. GMC duel came down to the finish line. Georgia Military College had two boys earn podium honors and Atkinson County had one. Both teams had all five of their scorers finish within the top twenty-five. It was red singlet chasing red singlet as runners from both schools finished sequential to one another. There was no telling who had won the race. Both teams gathered amongst themselves waiting to hear the final results. Ultimately, the final score was a tie, 66 to 66. Very rarely do we ever see this happen at the state meet level, and when your 6th man prevails and helps your team win the race, it makes the victory that much more special. This young man was Atkinson County's Edgar Perez who finished in 21st place. Atkinson County went on to have the most intense emotional embrace I had seen from the state meet. Small town rural Georgia schools do not often see state championship wins. The way this race played out with all of the dramatics, and to find out they had won on a tie breaker, this win meant the world to the ATCO community. I think their matching Superman socks might have helped them out a bit as they flew through the Carrollton course. Rounding out the podium team finishers was Georgia Military College in second place, Atlanta Classical Academy in third place, and Aquinas in fourth place.

Congratulations to all teams and individuals on your all's great season and amazing state meet performances!