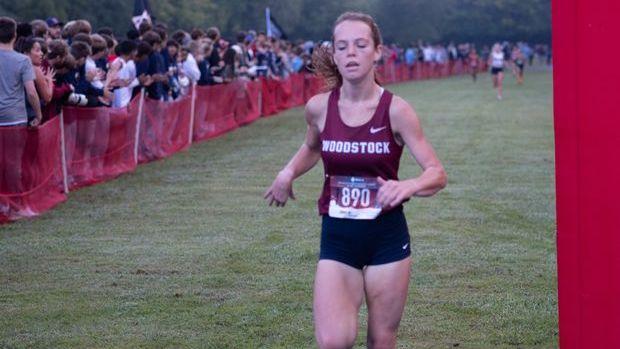 Samantha Burmeister is one of this week's winners

After a few action-packed weeks of cross country, many teams took a breather this week before their final pre-region tune-ups this week or next. The end is already within sight for yet another season, and for many seniors across the state, they are looking to end their final season of cross country on a high note. While only a few dozen Georgia boys and girls will continue competing at the college level, the desire to continue running has already been instilled in many of these young athletes. These seniors have just over three more weeks until their final state meets, and they will put it all on the line to help their teams and run to the best of their abilities. This week includes Unsung Heroes who may not be mentioned as top contenders in the classification, but they are all capable of making a big splash at the state meet. Even if these runners don't have a storybook ending to their high school XC careers, they have already showed tremendous ability and determination by improving year after year and setting themselves up for success.

Throughout three years of running cross country, Burmeister was a solid varsity runner for Woodstock, but she did not break the 20-minute barrier a single time. She accomplished that feat in her first race of 2022 and has further improved her PR twice since then. Against sturdy competition at the Cherokee County Championship, Burmeister ran the fastest race of her career so far. In fact, she finished less than twenty seconds behind Katelynn Dollar, one of the fastest runners in GA last year, who was making her season debut. Burmeister will need to bring her A game if she wants to help Woodstock make the state championships as a team. If she continues her great performances from the season so far, she will be one of the top runners in the region and in the whole classification.

The Mountain Invitational is a pretty important meet every year for the teams in North Georgia, and this year was no different, as 23 teams competed in the varsity girls' race. North Hall made a statement by winning handily without their top runner. However, lurking in seventh place individually was Adison Myers of Cherokee Bluff. Myers has been one of the most consistently good runners in the state since her freshman season in 2019. In three years of XC, she has finishes of tenth, third, and seventh at state. She has also finished sixth in the 3200 at the track state meet twice in a row. Myers has stayed in North GA for all five of her XC meets this season, and she has finished in the top seven in each of them. The emergence of sophomore Annalise Black gives Cherokee Bluff a dynamic duo at the front, but Myers will look to go four straight seasons as the Bears' top runner at state.

Pridgen was a newcomer to Christian Heritage XC this year after three years at Dalton HS. Her running experience so far has been one of steady progression: her PR was around 24:00 as a freshman, around 22:00 as a sophomore, and around 21:00 as a junior. Pridgen had an opportunity to compete against her former teammates at the Grove Level Stampede. Although she did not run a lifetime best, she did run a season best, and she stamped herself as a 1A-DII contender. It would not be a stretch to say she could finish in the top three at state this year after finishing 133rd last year. Now that's what I call finishing strong!

At its core, the sport of cross country has one simple goal: try to win every race. Rasmussen may have done more winning than any other runner in Georgia this year. In fact, of the eight races Rasmussen has toed the line in this year, he has emerged victorious seven times, including the final four straight. At the Greyhound Invitational on September 24, Rasmussen ran a personal best of 16:27 to top a field that featured 23 teams. Last week, Rasmussen cruised to a county championship. He has been extremely consistent for the Eagles of Warner Robins. With region coming up soon and state afterwards, we will have a chance to see Rasmussen compete against some of 6A's best runners. In his one meet against top-notch competition this season at Jekyll Island, he finished directly alongside Zakariye Abdulahi of Decatur (PR of 16:11) and ahead of Charlie Thomas of Brookwood (PR of 15:53). If he can bring that speed or something more to the state meet, he will certainly be a top-10 candidate.

Hall has steadily improved each year for the Pickens County Dragons as they have racked up two straight podium finishes in 4A. Now in 3A, they could keep the podium streak going for another year thanks to Hall putting everything together in his final season. The Mountain Invitational always produces some great times for runners, but Hall certainly exceeded expectations with a 22-second season PR. Along with teammate and fellow senior Noah Jones, Pickens County has a great duo up front. If Hall can replicate his stellar performance from the state meet last year (21 seconds faster at Carrollton than Wingfoot), then Pickens will be well on its way to a top-four finish.

In 2016, East Jackson won the 3A state cross country championship. Guerra-Baca began his cross-country career in 2020, so he never overlapped with any of the state championship-winning runners. However, ever since reaching the mountaintop, East Jackson has put together some solid squads, finishing top 10 at state four times out of five since then. On September 24 at the Apple Hawkins Invitational, Guerra-Baca became the fastest East Jackson runner since those on that 2016 squad. Then, last week, he did it again, running a new personal best at the Jefferson Invitational. That means Guerra-Baca has beaten his pre-2022 PR by more than 30 seconds three times in four races this season. Suddenly, after years of climbing the ranks, Guerra-Baca is a top 5 contender for 2A this November.