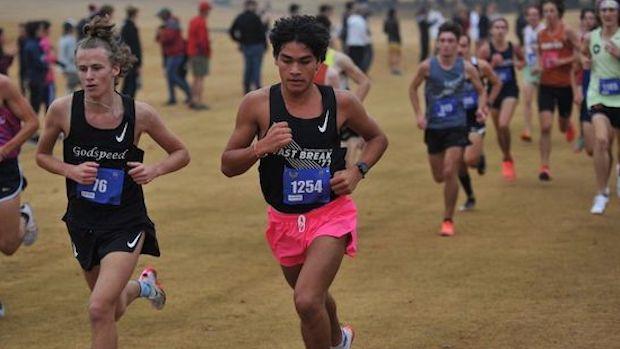 Joe Sapone is the only boy returner who ran under 15:00 last year when he placed 5th at RunningLane in the silver race. Photo by Bobby Reyes

Joe Sapone is the top boys returner on paper thanks to his sub 15 performance at RunningLane last year. Sapone ran 14:58, which is actually one of the fastest junior times in state history. And pretty much every other junior who ran that fast qualified for Eastbay (formerly Footlocker) nationals. Sapone won most of his races last fall save for the 5th place finish at RunningLane and the one hiccup in his xc season being an 8th place finish at Coach Wood. He also put up some monster times in track while winning a state title in the 1600 and 800 in 4:11 and 1:52. But the cherry o top of his monster junior year was his 4:09 full mile to end his season at Music City, which is the 9th fastest time in state history (counting conversions). Sapone looks ready to be a force this fall. However, he is not even a lock to defend his title as he will have to contend with...

Alex Arrambide who joins him in 4A this year. If Arrambide hadn't lost his shoe, he might have also been a state champion last fall. He backed up a very strong season with a 15:01 PR at RunningLane. And he clearly doesn't shy away from a challenge as he attempted the distance triple at state last year. He won the 3200 and came in 2nd in the 1600 and 800, losing to a very strong Matthew Fernando. He seems ready for the challenge this year. He also put up a 9:08 at Wingfoot so he's got plenty of strength to go with his 4:11/1:53 speed.

Simon Schabort is the best runner you didn't notice last year if you weren't paying attention. He's not flashy with his races and he saved his absolute best for last, the only blemish on his junior year being a, comparatively speaking, underwhelming state XC meet where he placed 7th and ran 17:10 despite running 16:29 on the same course earlier in the year. After that though he ran a very strong 15:18 at RunningLane. But then track season he was on a tear. His first big race was when he ran 9:02 at Arcadia over spring break. But then he became the first Georgia boy runner to complete the now possible distance triple at state. And on top of that he did it against an incredibly strong 2A field. He ran 1:56, 4:12, and 9:04 at the state meet to take home 3 tough wins.

And finally we have Ben Bergey who put up the 4th fastest PR last year in XC season. Bergey had an up and down junior year. He started out hot with a few big wins and a PR of 15:21 at Southern Showcase. But then he picked up an injury before the state meet and didn't run it. This meant he also had a slightly later start to his track season, but coming off injury was very impressive. He ran a PR of 4:14 to place runner up in the 1600 at the state meet and then finished off the year with a PR of 9:16 at RunningLane. His only 800 was a 1:57 in late March so he's clearly got some speed there as well.

Who will be the top boy in Georgia Cross Country for 2022?

Take a look at the boys returners rankings for each classification in Georgia XC: