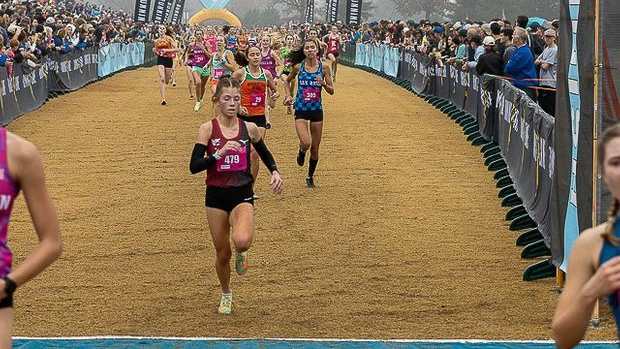 Katelynn Dollar is the top returning girl in Georgia this year. Check out the rankings below to see where everybody else stacks up. Photo by Chris Wells.

There were four Georgia girls who broke 18:00 last year in cross country, and all of them return. The fastest runner was Katelynn Dollar who was in qualifying position for Eastbay Nationals at one point during the regional race. Dollar spent the fall season last year at Lyndon academy so she didn't race against GHSA girls too often, but when she did she was very impressive. Her 18:58 for 9th place at Wingfoot is actually her weakest race of the fall. Because she followed it up with top Georgia honors placing 18th in 17:45 at Eastbay South and then 17:30 for 49th at RunningLane. She then transferred to Creekview and joined the GHSA. She got a late start to her season but was still able to qualify for state where she placed 7th in the 3200 and 4th in the 1600 for class 6A. She should be one of the top runners again this fall.

Caroline Hood was the next fastest runner last year with her season PR also coming at RunningLane where she ran 17:36. She was 1st or 2nd in every race throughout the regular season that culminated in her first state title. Her biggest win was probably when she ran 17:55 at Coach Wood. She continued the momentum in track season where she ran 10:42 to place 30th at New Balance Indoor Nationals and then had a PR of 10:37 in the 3200 outdoors which was good enough for 2nd place at the All American Track Classic. She also won the 1600 and 3200 at state and finished the year with a PR of 4:59 in the 1600.

Ruby Little is next on the list after running a PR of 17:49 at the Adidas XC challenge which was good for 2nd place on the day. She was also first or 2nd at every race throughout the year having 3 great battles with Hood. Hood won two of them, but Little got the win at Wingfoot XC classic in 18:08. Little also won a state title and went on to have a successful indoor and outdoor track season as well where she won another title in the 3200. She ran a PR at the state meet in both the 1600 and the 3200 where she ran 5:02 and 10:50.

Samantha McGarity is the last girl who broke 18 last year when she dipped under the barrier with her 17:57 at RunningLane. McGarity also won the state cross country meet with the fastest time of the meet in 18:39. She would earn the triple crown for distance runners with her wins the 1600 and 3200 at the state track meet, also running PR's of 4:57 and 10:46. She was also undefeated in the 1600 last year and has the fastest 800 PR on this list of 2:15, so if it comes down to a kick she might be the one to bet on.

Who will be the top girl in Georgia Cross Country for 2022?

Girls returners rankings for all of Georgia and by classification: