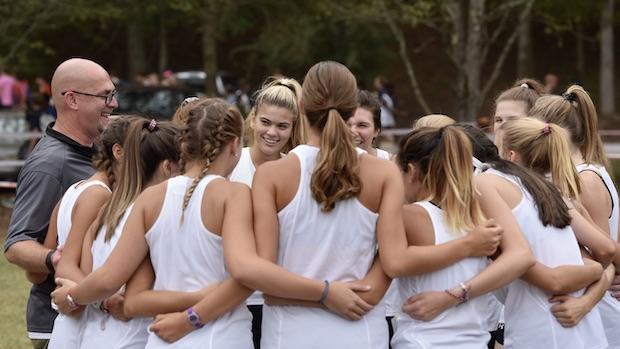 Summer Running ...Had Me a Blast

It's 7:00 a.m., do you know where your runners are? There they come, some practically on two wheels, as morning alarm clocks have interrupted their laziness on beach trips, adventures, flights, and sights of the other world.

They approach as one - even though coaches always hope there are more than that. You mentally rehearse your "Revolving Door Syndrome" philosophy as they draw near. After all, their minds are gliding and sliding all over the place, so perhaps you just try to throw something in at the right time, when they come back around so to speak.

"Uh, why are we doing this so early?"

Great! The season starts off with an easy question. "Because if we wait until later, we're going to get baked, broiled, and sauteed due to the heat. The real-feel was 107 yesterday!"

They circle around you - similar to the days of being bullied on the 5th grade playground - as if waiting for you to answer for taking up their summer morning. And EARLY summer morning no less. You offer something funny, and no one laughs, give them the protocol for the run and the stretching, look to them for feedback.

As if on cue, your silence leads to their emptying those always-full minds - and unfortunately it has little or nothing to do with running. "When are you taking the SAT?" "Can you believe we're juniors already?" "Did they really break up? I knew that was going to happen!"

Regardless, your clan does the hardest thing to do when it comes to this sport - take the first step. Creaking muscles and the roll call of body parts interrupts their chatter, though it saddens you because most of the noise is coming from your own self.

Still, they're off - and as their body loosens, their minds empty into syllables, words, stories. As for coaching mental gymnastics, it's perhaps wondering why kids ALL-WAYS wait till the last minute to get their paperwork done! And will another trip to Huntsville break the budget, thus getting the dreaded, "See me!" email from the athletic director? And speaking of ACT's and SAT's, which meets should we avoid where we don't have half the team gone?

Summer running - a necessity for those who are "in it to win it." An inconvenience to those who signed up for something to do, perhaps a way to earn a letter, maybe a good idea because there are girls AND boys there.

Regardless, running requires warming up - mentally and physically. To wait is to be late, as an August 1st start will have you behind most of the field before the starting guns are even checked for blanks.

Moving on, your runners return in increments, two here, three there, one sort of wandered back by himself. You make sure they're accounted for - if not that would SERIOUSLY be an email you don't want to open.

They sit and they stretch. Talk about how humid it was. Running, finally, has ventured into the conversation. "Why are we now in 4A?" "Aren't some of those teams...like...really good?" "Is Reese running this year or playing softball?"

You used to wait until they talked themselves out. Now a veteran, you know that doesn't happen. You catch them between stories, offer some advice, positives, love for being here, optimism for the season, classifications be darned.

You talk quick, short sentences, mainly because people always say that kids don't listen. Actually, they do, it's just that so much is thrown into their adolescent minds, that - at some point - something has to drop out.

Sorry coaches. Sorry mom and dad. Often, we lose out. It's not personal.

Still, you have to smile as they head back to their cars or wait for their moms. Sweat has replaced mattress marks, yet another agenda has been placed in their future - that of cross country 2022.

For some, summer running did happen so fast, the ones out of shape now going home gassed. But whether your team winds up on the podium or slinking home underneath it in November, this is where it starts, a football team's equivalent of the weight room.

You think of the upcoming season as you drive off, wonder about attendance for the rest of the summer, and whether cross country can fit in to their forever revolving door. For some it will, for others, not a chance.

Regardless, you have to start some time and that time is summer - that time when the sounds of starting guns hopefully begin beckoning in those young, ever-churning minds...