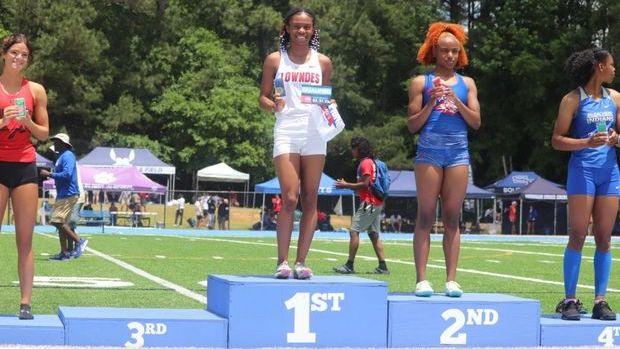 Johnson on top of the podium at the state meet. Photo by Alex Brust

Kaniya Johnson, the graduated senior from Lowndes, is one of the four finalists in the vote for the best performance from the 2022 Georgia Outdoor Track and Field Season. We will be running a piece today on each athlete detailing why you should vote for them. Here is the case to be made for Johnson.

Just like the other four athletes on this list, Johnson owns a performance that is top 3 in the history of the state. Her time of 11.26 to win the 7A state meet in the 100m is the second fastest ever by a Georgia girl runner. But there's more to her than just her fast 100m time.

First of all, while the 11.26 is her best performance from the season, it's not her only performance to make the top ten all time performance. She has two others. She ran the 5th fastest time ever in the 200m, an event she also won at the 7A state meet. And finally her 4x400m relay team was the 4th fastest ever in Georgia history, which they also won. To go with that she won all four of her events at the 7A state meet, also winning the 4x100, which was half of the 80 points Lowndes scored in their winning team effort. So not only was she a huge part of her team success, she was undefeated this year in both the 100 and the 200, her biggest wins being the state meet and the All American Track Classic against stiff competition both times.

And let's not forget that the only person in state history who is faster than her in the 100m dash is the national record holder in the event. Georgia has a long history of producing some incredibly talented sprinters and she just beat all but one of them. That's definitely worthy of some high praise.