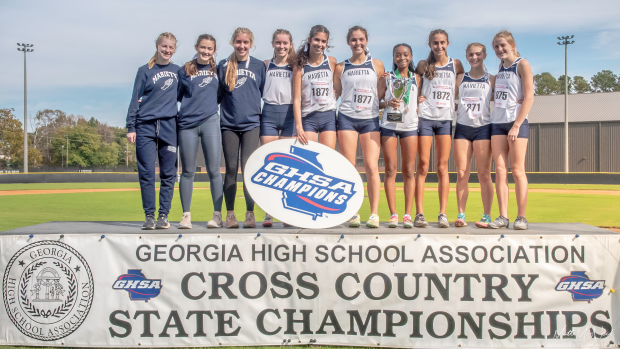 Marietta girls won the 7A title. Photo by Matt McNeil

Path to the Podium: Marietta Girls, by Andy Christie

We've asked coaches to reflect on what it took to get their team to the podium at the 2021 Georgia State Cross Country Meet. Next up is Coach Jack Coleman from Marietta, to talk about his girl's Class AAAAAAA State Championship, their 2nd in a row.

any seniors that set a good example or laid the foundation?
The Team graduated a strong class in Betsy Gordon, Hattie Rydinsky, and Macie Pfeuffer.  That group had helped us earn 3 state titles.  They were positive role models that showed the younger ladies the work and drive necessary to be successful.

any results that gave motivation (good or bad)
Winning state during the Pandemic was motivation in that it showed the group they could improve regardless of circumstances.

The team focused on improving throughout the spring knowing that with a very tough region meet there was a good chance we wouldn't get many runners through to sectionals or state.  The 4x800 became a point of emphasis since it was a team event we could possibly make state and score in.  This helped our training group significantly to have a team goal to focus on. Nora Hart had a breakout spring moving from our #7 in 2020 fall to one of the top 1600 & 3200 meter runners on the squad.

any new additions that changed the outlook for XC
Maddie Jones, Colette DePasquale & Bella Russell had been in our Middle school program and moved up to High School.  Lillian Murrell, a senior, decided to run Cross Country after playing volleyball for 3 seasons.

how the team handled summer training.
Summer went very well.  As Berry Camp concluded there were 12 girls who possibly could run in the top 7 by the State Meet in November.

anyone that had a breakout season that changed the outlook.
The top 3 runners- Kristal McQueen, Nora Hart, and Maddie Jones established themselves early as our consistent top 3 scorers.  Colette DePasquale (freshman) and her sister Madeline (senior) turned out to be the major surprises.  Colette had spent her 8th grade year injured and never raced in 2020 XC season.  Her sister Madeline was the number 14 runner on the team as a junior.  Both earned their way on to the varsity squad early in the season and never looked back.

any setbacks/challenges that had to be overcome?
The depth from Summer had disappeared by mid-September as injuries,  resignations and covid all flared up.  Looking back the Varsity 7 didn't change after the Carrollton meet in September.  The team had some up and down results as they did well in small meets, but the bigger meets were a struggle.  The team was young and still  learning how to race in the larger packs.  I believe the challenge of becoming a consistent team made us better.

in hindsight, key moments of the season that led to the State result.
Everyone felt the team had the capability to win state, but the question was could they be consistent as a group on the right day.  The girls answered the question by putting together their best race of the season.  The 4,5,6 runners, Colette Depasquale, Gabi Comsudes and Lille Murrell each dropped over a minute from their earlier Carrollton times while our other runners each dropped about 30 seconds each.   We were very fortunate to step up as Harrison ran a good race.

I don't believe the season would have been the success it was without the contributions of two seniors, Finlay Mann and Ava McCracken, played.  Both had been on the team since middle school with Finlay having run at the last 3 state meets.  As the team transitioned from an experienced team with Senior leaders to a new much less experienced team with younger runners racing Varsity, things could have gone much differently if not for their support and leadership they  provided throughout the last year.