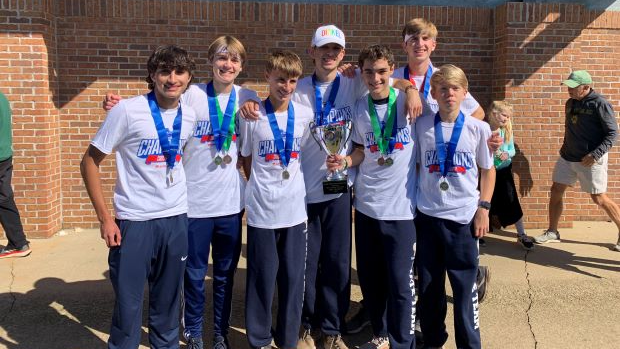 Path to the Podium: Whitefield Academy Boys, by Andy Christie

We've asked coaches to reflect on what it took to get their team to the podium at the 2021 Georgia State Cross Country Meet. Next up is Coach Kelly Rothwell of Whitefield Academy, to talk about her boy's Class 1A Private State Championship.

any seniors that set a good example or laid the foundation?
We actually did not have any seniors in 2020 on the boys team

any results that gave motivation (good or bad)?
At the region championships, we were predicted to lose to Paideia. I (Coach Rothwell) asked Peyton, Taylor, Sebastian, and Andrew to pack run, which they had never done before in a race. Andrew had not been able to run close to the other boys in any other race. They finished 3, 4, 5, 6 winning Region. It was at this race that they realized what they could do together. They also started to believe that they could have a chance at winning state in 2021. This was a pivotal race for Andrew because he realized he could push through the pain and hang onto his teammates. It boomeranged him into state where he finished second behind Peyton for the team. That was the best he had done all season. Blaise struggled with an Achilles injury for the second year in a row at the state meet. It kept him from improvement during the XC season, but instead of letting the injury get him down, he used it as fuel to the fire to rest and then do well in spring track

mindset of the non-seniors?
The non-seniors walked into the post-season energized and excited to do well in the track season because of all of the success they had in the XC season.

anyone that had a breakout season, or new additions, that changed the outlook of XC
Andrew was late to starting the season due to covid and then complications after covid. He was hoping to just beat 5:00 in the mile, and ended up getting a 4:44 by the end of the season. He also made state in the 800 and 4 x 800 as a freshmen, which helped him gain confidence in his abilities. Blaise ran a 2:13 at area and performed well in the 4 x 800. He was able to keep off injury for the season and began to see that he still had more improvement in him.

anyone that was already expected to contribute, but still had a good season
Peyton and Taylor were expected to be huge contributors to the track program in the 1600 and 3200 and both performed very well. Peyton was hoping for sub-10 in the 3200 and then got 9:37.69 at state and placed 5th. Taylor was also hoping for sub 10 and got a 9:44 at state.

any new additions that changed the outlook for XC
Coach Barnett moved to Wesleyan and Coach Holthus moved into the Head Coach position. Coach Rothwell (who started coaching at Whitefield in 2020) stepped in to coaching the Varsity boys. Freshmen Riley Hugues and Cavin Estep joined us and were huge contributors to the varsity team.  It gave us the number 5 that we were missing the year before.

early goals for the season
Train hard on hills the whole season so that we thought the hills in Carrollton were a joke. Win state.

how the team handled summer training
The varsity boys did an excellent job of being consistent in their training. They even trained during vacation on their own. We trained weekly at the Kennesaw mountain trails. We did lots of hill running over the summer in preparation for Carrollton. They did all that their coach asked them to do.

any setbacks/challenges that had to be overcome?
Peyton struggled with a sudden onset of asthma during this season that inhibited his training during the summer and early in the xc season.

how early results compared to any goals?
Taylor got his goal for the season at Starr's mill (sub-16) and began to realize he could cut down more time. Andrew was hoping for 16:30 for the season, but then ran 16:32 at Starr's mill and 16:52 in Carrolton and realized that he could do better than he thought. Peyton had a rough start to the season with some asthma and it band issues. We actually had higher goals for Peyton that he struggled to meet until he got to Asics and finally hit sub 16.

any revisions of goals?
We stuck to the plan and kept pressing forward, knowing that if we kept to consistency, all of the boys would get to where they needed to be.

any setbacks/challenges that had to be overcome?
The fast freshmen boys had a hard time feeling like part of the varsity team. They preferred to train with the other JV freshmen, but as the season progressed and the team spent more time together, they found that they did enjoy hanging out with each other. They started to see how they were teammates. A pivotal point for Riley was Asics, where he lost BOTH of his shoes in a rough start, and when he finished, the varsity team really rallied behind him and gave him tremendous accolades for how cool they though he was for running sub 18:00 barefoot. He realized then that they were for him.

in hindsight, key moments of the season that led to the State result?
When the boys finished 7th at Starr's mill against strong teams in all divisions, our goal of hoping to win state became more of a feeling of "we've got this!" We started to get invitations to championship races at Wingfoot, Asics, and Coach Wood, which had never happened before in Whitefield history. We realized that we had a special team this year and an amazing chance at not only winning state but being one of the top ranked teams in GA