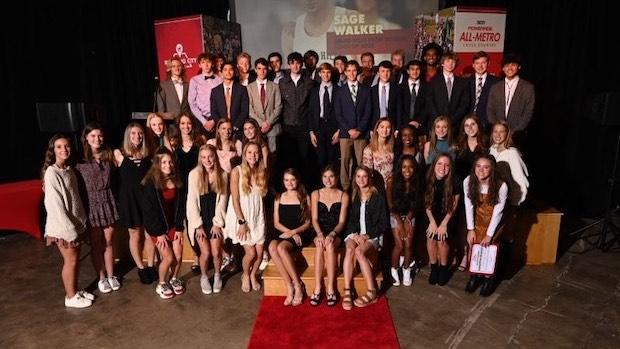 The 2021 ATC All Metro Team. Photo by Paul Ward

ATLANTA - NOVEMBER 17, 2021 - Having never placed lower than 2nd in any race this season and winning the GHSA Class 4A State Championship, Marist School sophomore Ruby Little was awarded the Runner of the Year award at Wednesday's Powerade All-Metro High School Cross Country Banquet. Little ran a season's best of 17:49 at the adidas XC Challenge in North Carolina this fall. It was the second fastest time of the season by a Georgia High School runner. At the State Championship, Little led the Marist War Eagles to the team title where they placed five runners in the top seven.

"I am just so grateful for every opportunity and all the hard work my team put into each practice," said Little. "I'm thankful for my family and everything they have poured into me."

Ethan Ashley, a senior at Denmark High School was the Runner of the Year on the Boys Team. His season's best time of 15:01 at the Coach Wood Invitational was the fastest time in the state this year. He was undefeated in 2021. Ashley's wins included the GHSA 7A Championship in which Denmark took third in the team competition

"I was super blessed to be able to put in a lot of good work with the guys," said Ashley. "This was a really great way to end my senior year."

The Powerade All-Metro Cross Country Team was announced earlier this month and included athletes from 25 schools representing six area counties. Selections are based on season-wide performances, head-to-head competition and time at the State Meet. Team placements are determined by a vote by local coaches and the general public.

At the banquet held in midtown Atlanta, State Championship-winning coaches were honored. Coach Stephen Jayaraj of Holy Innocents' Episcopal School and Scott Neal of the Tallulah Falls School were awarded the Coach's Dedication Award, an honor bestowed for coaches with outstanding career achievements and contributions to the sport of cross country.