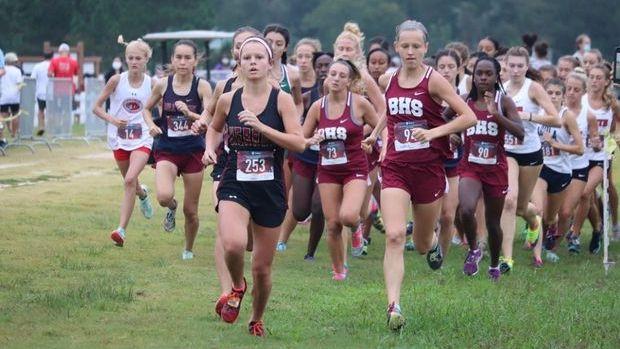 Many of the top individuals return from last year's race on the girls side. But will we see a new champion? Photo by Bruce Taylor

For the 46th time, The Gwinnett County Championships are set to go down... once again outside of Gwinnett County, and once again during a pandemic!  Over 20 public and private high schools in the county will meet at the Georgia International Horse Park to contest this historic event.  COVID variants and a dangerously divisive political climate are doing their best to derail critical moments for kids, but as of now, we continue to march on into this weekend with a bunch of awesome races - one of which is the Gwinnett County Championships.  Defending champions from last year are Norcross for the boys and Parkview for the girls.

Boys' Individual:  Up For Grabs?

The entire top 5 from last year graduated, and all are currently competing in their freshman year of college:  Will Bray (University of Georgia), Andrew Todd (Augusta University), Ben Butcher (Lipscomb University), Miguel Schlicht (Georgia Institute of Technology), and Sebasthian Rodriguez (Mercer University).  This leaves the 2021 race entirely up for grabs.  The following list of gentlemen have spent the better part of two years beating the snot out of each other up and down hills and around track curves.  The two favorites currently emerging as it stands though appear to be Ethan Nordman of Mill Creek and Nathan Solomon of Shiloh.  Nordman is the top returner from last year and has opened up his season with two sub-16:00 efforts and a 2nd place and 4th place finish.  He's coming off a strong track season and is the frontrunner on a team striving for a team championship both at County and on bigger stages.  Solomon may be the lesser known of the 2, but he's also coming off a track campaign which saw him nearly break 4:20, and he's won his first 2 races of this XC season.  Strong talent lurks in the background though as the likes of Miles Ferguson (Archer), Caden Hall (Parkview), Yianni Pothoulakis (North Gwinnett), Hayden Squires (Dacula), Steven McCartney (Archer), and Marshall Bray (Brookwood) will try to bully their way through the ranks.  Ferguson, Hall, and Pothoulakis probably have the strongest pedigree of the list with Hall coming off a top 10 finish at State in Carrollton, Ferguson dropping a sub-16:00 effort already, and Pothoulakis defeating the aforementioned Hall earlier this season.

Last year's campaign saw Norcross win with 68 points and were followed by a smorgasbord of teams in Mill Creek (85), Parkview (87), Archer (88), and Brookwood (94).  It doesn't appear to be as close this year though as Mill Creek has opened up their season in super strong fashion.  They're coming off a commanding victory at AT&T Starr's Mill.  Joining Nordman are a supporting cast many teams can be jealous of in Jake Peters, Shahzeb Rashid, Luke Kalarichal, and Joseph Kim.  This team is talented enough to get 4 or 5 in the top 15 which will be far too much for any other team to handle.  The most likely candidate to take down the Hawks though are the Brookwood Broncos.  Brookwood had an army of runners at the North Georgia Championships help them to a runner-up finish and were led by Marshall Bray who finished in the top 10.  He was joined by Ben Roberts, Kingsley Doyle, Carter Dehnke, Jonah Harper, Charlie Thomas, and Peyton Harley - all of whom were within 17 seconds of each other.  Mill Creek may be a little too top heavy for the Broncos, but I expect this team who opened up aggressively a couple weeks ago to try and do the same to pull off an upset.  There does appear to be a gap after Brookwood with a trio of teams likely fighting for the final spot in North Gwinnett, Parkview, and Dacula.  North Gwinnett got the first laugh over Parkview two weeks ago at the North Georgia Championships thanks to putting three in the top 20 in Pothoulakis, Matthew Drane, and Will Collett.  Parkview will need more from the supporting cast following Hall with Martin Robles and David Garcia needing to match the 2-3 punch of North Gwinnett.  And then there's Dacula - my alma mater - starting to make some noise this season.  Dacula took 10th overall at AT&T Starr's Mill and were 2nd at their opening meet giving 7A Milton a run for their money.  They'll need a big race to topple North Gwinnett and Parkview, but their early season run suggests they should at least be mentioned.

In a completely opposite scenario from the men, the ladies' race returns all but four of the top 14 girls from last year's race.  Defending champion Brooke Browning of Hebron returns and, while she hasn't quite looked like her usual self in the early goings of this season, her dominant victory last year leaves everyone pretty confident that she can right the ship.  Teammate Ellie Brewer has taken back to back second place finishes to open up her season, so her form looks to be in a good place, too.  Perhaps the biggest threat to Gwinnett having a new team champion though is Parkview's Emma Geaney.  Geaney took 4th overall in a pretty stacked field at the North Georgia Championships, taking down a couple top 10 7A State finishers in the process.  Teammate Haley Primm, 8th overall in the same race, is also a big threat and is coming off a strong Track season.  Allie Wardle of Brookwood, 4th overall and one spot ahead of Primm two weeks ago, also factors big into this individual chase as she's also coming off a great track season.  Emily Guy of Mill Creek defeated Browning at AT&T Starr's Mill last week and was top 10 at County last year, so she also is one to be taken seriously.  The final 'top billing' name is a new face to the top echelon in Norcross's Kyra Andrews who broke 19:00 at Bob Blastow earlier this season and was runner-up at the NEGA championships.  She could be the dark horse that takes the field by surprise.  Other individual threats include Jaimie Chen (Parkview), Marianna Gazzara (North Gwinnett) Tori Meyer (North Gwinnett), Emily Cragin (Archer), and Laney Pierce (Peachtree Ridge).

Girls' Team:  Can Parkview make it three in a row?

The Lady Panthers of Parkview look to do what no other Parkview girls' team has done - win County for a third straight year.  They have the firepower up front in Emma Geaney and Haley Primm along with two more surefire threats in Jaimie Chen and Abi Debebe.  Where they run into trouble though is at #5.  Last year's squad had a similar issue, and they were able to 'do enough' to get it done, but the ladies of Mill Creek and North Gwinnett, far deeper squads, will smell blood and pounce on the Panthers if that gap gets too wide.  Mill Creek has an excellent supporting cast following Emily Guy in Kathryn Scales, Evelyn Schlitz, Reagan Gakstatter, and Jade Jacobazzi.  North Gwinnett has a similar team setup with some talent up front and depth following.  Look for the likes of Ellie Brink, absent two weeks ago, to mix it up with Meyer and Gazarra.  Sacha Brickey, Maddy Tilson, Kate Lewis, Lizzy Pope, Arianna Meyer, and Lizzy Meyer all can score for North Gwinnett which gives them far more depth than Parkview has shown.  One other team worth mentioning here are the Lady Blue Devils of Norcross.  They did take 5th at Bob Blastow a couple weeks ago, and while it's a quick course, they did average under 21:00.  Similar to Kyra Andrews in the individual chase, Norcross as a team can sneak in and do something special.  The girls' team championship is up for grabs.

The action kicks off at 8:00am at the Georgia International Horse Park!